After using an RK3066 tablet back in 2012, I was certain about the potential Rockchip processors had in them. Since then, the fabricator has come a long way; it’s even produced SoCs for some renown companies like HP, among others. 2013 saw the RK3188 chipset’s popularity; we even reviewed a TV box that came powered by the RK3188 here on GizChina. As you might’ve noticed, Rockchip doesn’t seem to care much about phones, and emphasises only on larger devices such as tablets and TV boxes.

The RK3288 was launched earlier this year, and devices based off of the SoC have only started shipping. The Tronsmart Orion R28 Pro is one among the few, which is a TV box that sells for just US$99.

You would expect any new-age device, high-end or entry-level, to have a decent features offering. Most devices of today don’t fail, and the Tronsmart Orion R28 Pro certainly doesn’t. Like mentioned before, it comes with the Rockchip RK3288 processor which is the start of the show here: the SoC rocks a quad-core CPU with a 1.8GHz frequency across four Cortex A17 cores, along with a quad-core Mali-T764 GPU. The RK3288 is the best and most advanced Rockchip SoC by a fair margin. It allows the Orion R28 Pro to decode H.265 4K video.

2GB of RAM and 8GB of on-board storage make the Orion R28 Pro your quintessential ‘2/8’ Android TV box, but it’s the RAM that should matter more than anything else, because if you wish to use the Orion R28 Pro as your HTPC companion, then you’ll certainly have to slap more storage onto the device.

Unlike some other mainstream-ish TV boxes from China, the Orion R28 does not come with 5GHz WiFi, it however does 2.4GHz b/g/n pretty well.

Other specifications of the R28 include an IR sensor (for the stock remote), 3x USB 2.0 ports, 1x microUSB port, microSD slot, S/PDIF, AV jack and and RJ-45 ethernet port. It also comes with a detachable antenna, so naturally there’s a jack (volume type) for that. 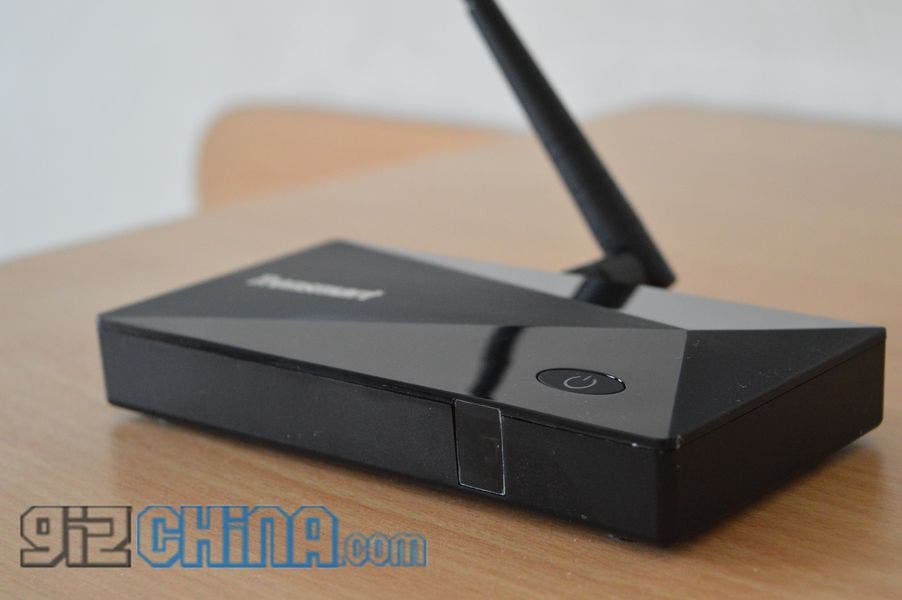 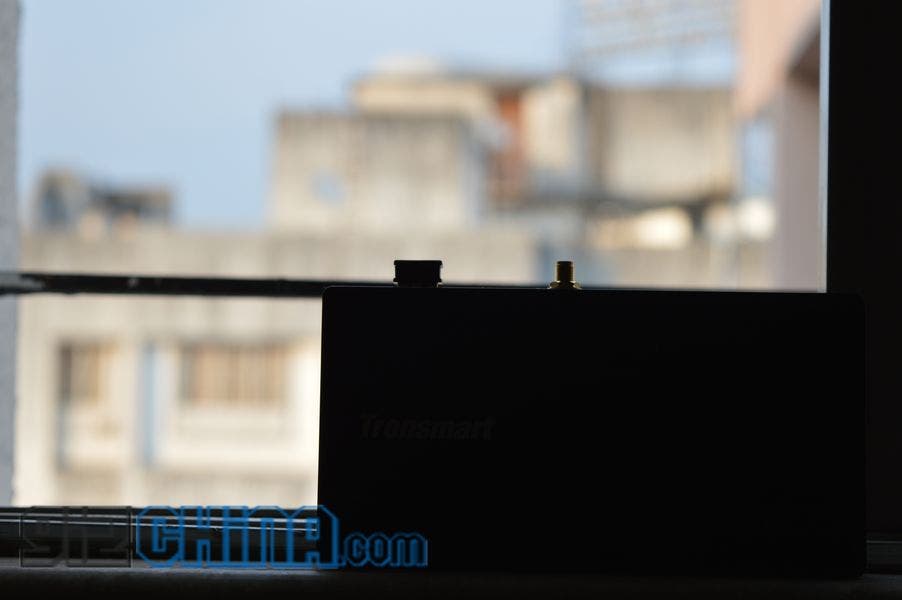 Up until now, we’d seen two types of Android TV boxes: those that look like set-top boxes, are bulky; and those, which look like pen drives and are tiny and hardly noticeable. The Orion R28 is the third kind, which sits in between both those forms.

The box itself isn’t nearly as teeny as a pen drive, but is extremely light (took me time to get used to it) and very discreet. It’s plain black, and has an arc-like design which does look pretty good. The form factor of this device will make it easy for anyone to slap it on the back of their TV and never think about it again… only use it. 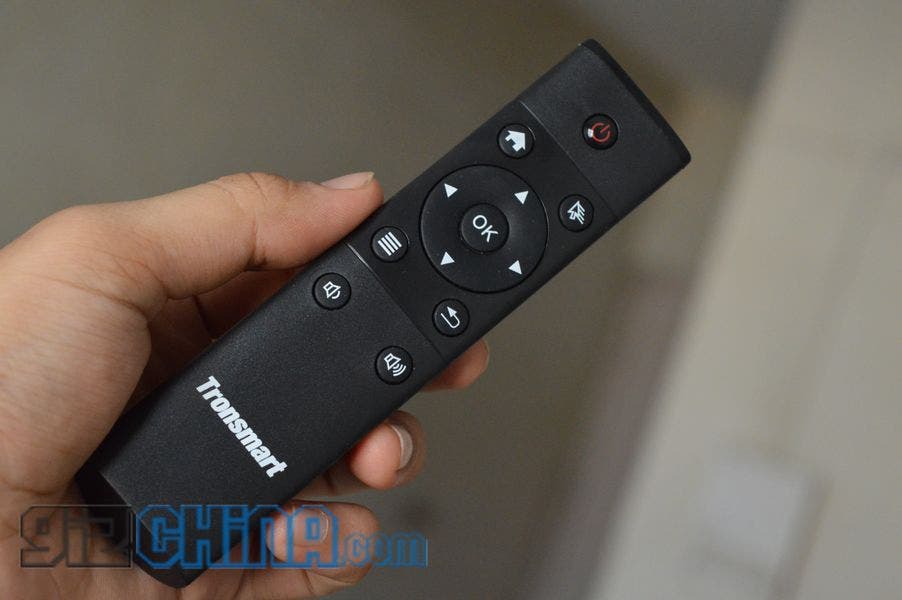 An IR sensor makes home right at the front of the console, which in my opinion doesn’t look too pretty. It does, however, bring the supplied IR remote into play.

The provided IR remote, as you would expect, is very basic. It does elementary tasks like bring you back to the home screen (home button), taking you back (back button) and adjusting the volume, besides navigation. 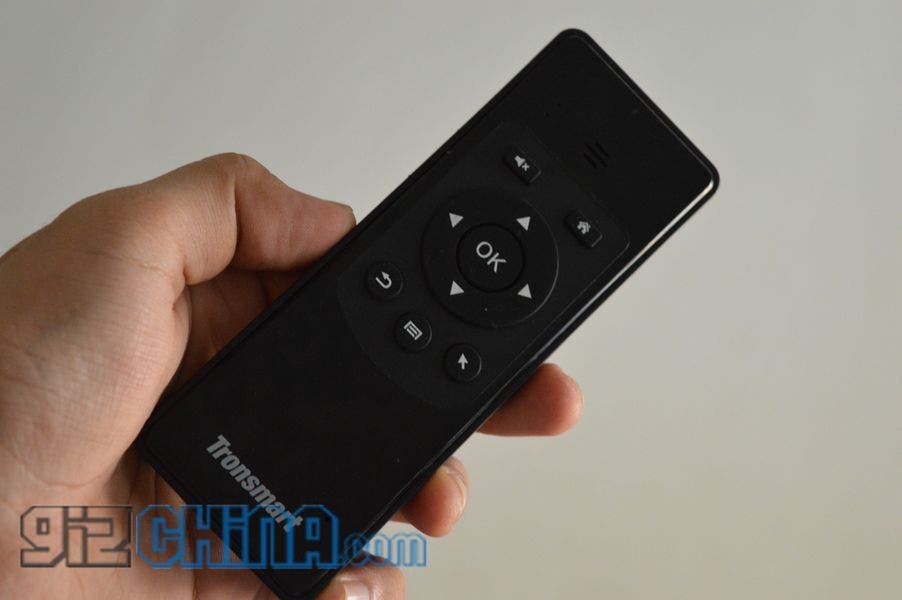 If you’re planning to set up a mini home theater using the Orion R28, you are strongly (can’t emphasize enough) advised to get the air remote (Tronsmart TSM G62C) as well. It costs just US$17, but makes the TV box WAY more usable.

It has the usual navigation buttons on one side, and a full fledged keyboard on the other side. Since it works over 2.4GHz wireless and not IR, it does not require to be in line-of-sight of the TV box, thus making it a lot more convenient to use. More about this in the next section. 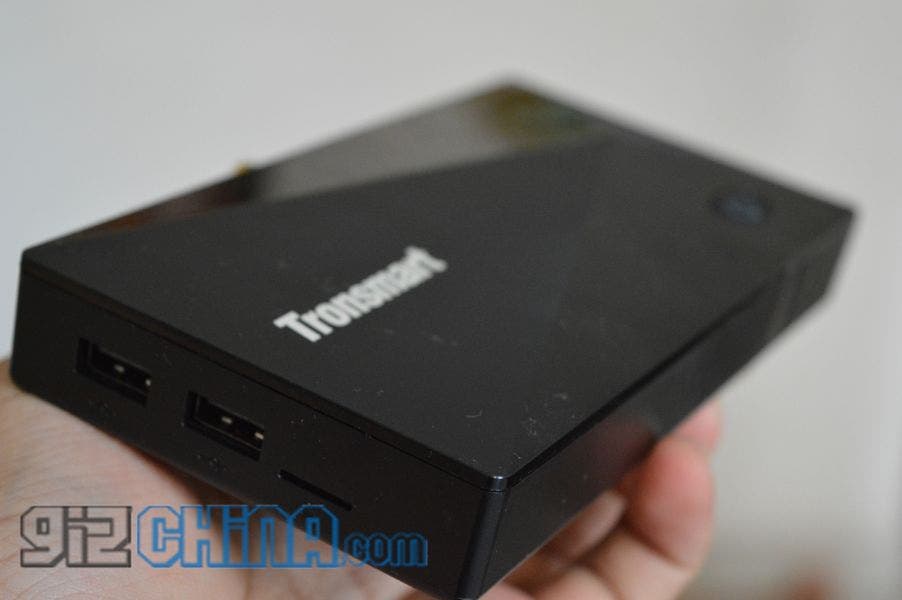 The Orion R28 boots up fast enough for you to not have think about the time. The first boot does take quite long (and I was even greeted with a recovery screen on first boot, but it looks as though it’s supposed to be like that), but that’s understandable. Just make sure you don’t disconnect power whilst the boot is going on since the system performs some sort of a flash/wipe before booting.

You’re greeted with an AOSP launcher made for touch-based devices, which honestly did disappoint me. TV’s are supposed to be quite a distance apart from the user, which means icons are text looks smaller than they actually are. An AOSP launcher doesn’t do good in this regard.

I didn’t spend too much time with it, and was quick in installing a launcher from the MINIX series. Surprisingly, not only was it a lot more easier to deal with, even the air mouse performance went up by a notch. If you wish to try the launcher out on your TV box, you can download it here. Google services come pre-installed on the device which is always a good thing, since you don’t have to waste time fiddling about trying to install those by yourself. The box was up and running in no time after it updated the services, and I added a Google account.

WiFi performance is extremely good, quite a lot better than the MINIX Neo X7 that we reviewed previously. However, you have to make sure you have the antenna attached at all times, otherwise you’ll hardly get any range.

We conducted some benchmarks on the device for those interested. If you trust word-of-mouth more than benchmarking apps, well, here it is: the RK3288 is a beast. Take a look at the benchmark scores the device managed. For some reason, the TV box did not want to proceed with the browser test on Vellamo.

Through the one and a half weeks of use, we had no compatibility issues whatsoever. There’s also XBMC preinstalled for those who care about it; this TV box has pretty much all fronts covered. I used it with (i) the Tronsmart TSM G62C air mouse, (ii) the Minix Meo A2 air mouse and (iii) the Logitech MK270 mouse/keyboard combo, and the TV box handled each of them without any sort of a hiccup. 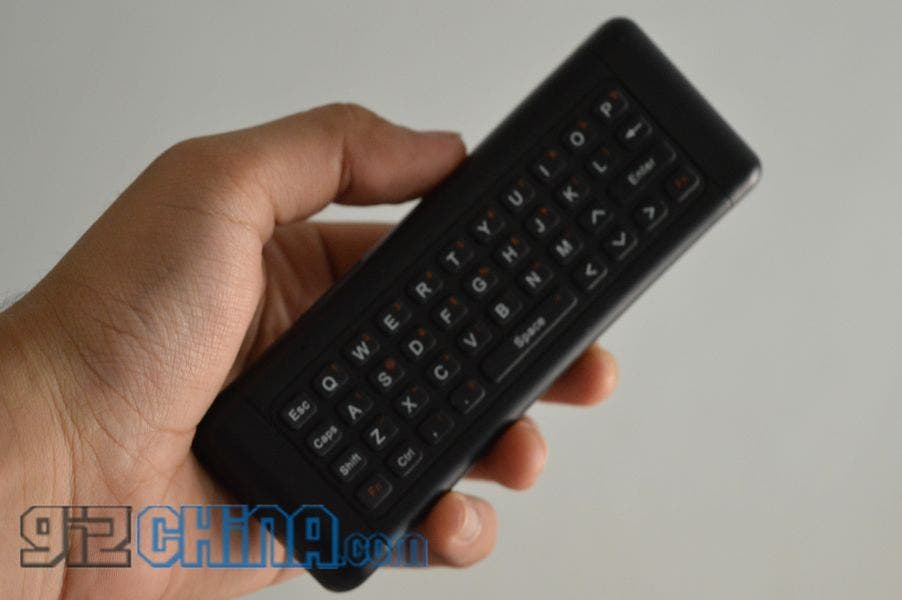 The TSM G62C is one of the most affordable air mice available as per my knowledge. However, this unfortunately does mean that the quality isn’t the best. The remote is pretty lightweight, which is a good thing in my book, but it doesn’t inspire a lot of confidence. The front side (the non-keyboard side) seems to bear the brunt of this; the plastic used is in a way, flimsy.

What is good about the remote is that its very easy to use thanks to the size. I’ve used the Minix Neo A2 air mouse in the past which is a bit larger, making it harder to type using the keyboard.

The TSM G62C comes with another feature that although does sound interesting, doesn’t work very well: audio routed via the remote. There’s a one-off button on the remote which you need to press to make audio from the TV box route through the air remote. For playback, there’s two options: you can either use the built-in speaker or plug in your earphones to the 3.5mm output jack. Pretty darn cool, no? But it’s a shame that audio is not sharp at all, not through the on-board speaker, not through the 3.5mm jack’s output. The feature itself does make a lot of sense, and one would hope to see better implementation of it in later revisions of such devices.

In all, get the Tronsmart TSM G62C air remote only if you are on a limited budget, and do not wish to use the supplied audio features.

The Orion R28 Pro is by far the best Android TV box I’ve had the pleasure to play with. Being a user of the Asus Chromebox, I’m a fan of devices that aren’t the ‘in your face’ type, but focus more on doing the job done than showing you that they’re at it. There’s a few things that the Android OS does need to handle in a better manner though: when you choose to turn on the hardware keyboard (on the air mouse), the search key needs to be manually clicked on the screen (hitting enter on the air remote does not do the job). This is something that I hope is fixed via future firmware upgrades.

It’s discreet, it’s lightweight and it’s blazingly fast; that’s what one expects from Android TV boxes.  What is also interesting to note is that the TV box comes pre-rooted, which suggests it means business and is meant for the power user more than a newbie.

The device is available for a starting price of just US$99 on GeekBuying.com, so go ahead and get one if you like what you read.

Next Chinese Xiaomi customers could be in for Mi4, MiPad and MiTV price cuts