Vivo might not mix it up on the social media channels as Meizu and Xiaomi do, but they aren’t shy about simply destroying the competition on specs and design. With that in mind lets look at the leaked specs of the next Vivo Xplay.

Earlier this week Vivo decided that Oppo had held the worlds thinnest title far to long (around a week) so decided that taking their new and all together thinner 4.75mm Vivo X5 Max to TENAA to get the green light for launch.

Now on Weibo an alleged leaked specification sheet claims to out the specifications of the next generation Vivo Xplay.

The Xplay has been Vivo’s flagship phone for the past few years. The current version, the Vivo Xplay 3S was the first phone to boast a 2K display, and the first Chinese phone with 3GB RAM, Snapdragon 801 processor and rear mounted fingerprint scanner. It’s a tough act to follow but Vivo might have done it. 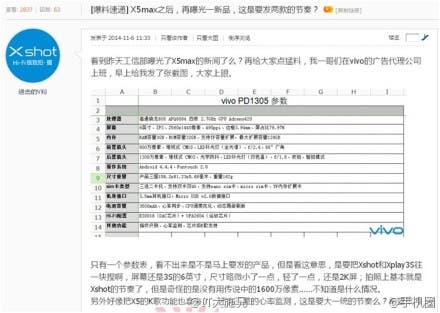 The last Xplay was launched around this time last year so the new phone is about due. We can’t wait to see this beast in the flesh and review the phone.

Previous Geely GC9 spotted on the road ahead of launch