Do you remember the Pipo W1? This was one of the very first Windows 8.1 slates from China back in 2013. We gave it a shot back then and found it to be a decent tablet, perfectly suitable for mobile productivity thanks to the useful type cover it came with. Last year, Pipo did release a successor of this tablet called the Pipo W3. With an admitted delay of several months, we finally got our hands onto this new Windows pad and put it to the test for over a week.

Before we have a closer look at the actual device, let’s first check out the specs. Like its predecessor, the Pipo W3 is a 10.1-inch tablet with 2GB of RAM, 64GB of memory and a 8,000mAh battery. So what’s making the Pipo W3 a new device? Well, quite a lot actually, as the screen’s resolution has been bumped up to a 1920 x 1200 pixels. The SoC hasn’t been left untouched as well, being an Intel Atom Z3775D with a maximum CPU clock of up to 2.4GHz. Pipo even included 3G support with the help of a Huawei UltraStick this time, so you are well in the game if you wanna access the internet on-the-go. What’s more, the W3 even delivers support for Bluetooth 4.0, Wi-Fi, HDMI, native USB 3.0, OTG and Micro SD cards. The operating system is Windows 8.1 with Bing, featuring a free one year Office 365 subscription.

When you order the Pipo W3, you basically get the same stuff as with the W1 once again. There is one large box containing the tablet and the type cover, and one small box with the wall charger, documents and OTG adaptor. The packaging’s design has been well done but doesn’t differ much from the W1. 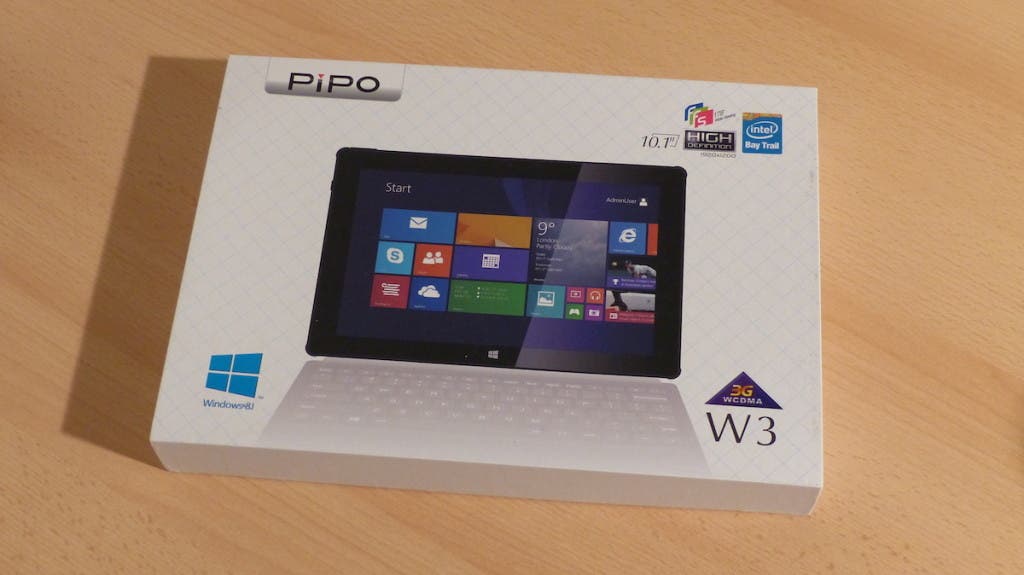 Something that has changed significantly though is the device. Pipo decided against a full aluminum body this time and went back to their tradition of combining a polycarbonate body with a brushed metal plate on the rear. Surprisingly this didn’t change the weight at all, which still is 588g. Other changed details are the stereo speakers which have been moved onto the upper frame and a removable plate on the right side of the tab, covering the slot for Huawei’s UltraStick. Something a little surprising in fact is, that the thickness of the body remains the same at 1cm, despite the added USB 3.0 host port.

The overall build quality is as good as we are used to from Pipo. The tablet doesn’t feel cheap at all. The only thing we noticed is a little squeaking when pushing onto the slates edges, plus the UltraStick cover, which doesn’t seem like a part one should remove too often.

The most popular of the first Windows tabs from China in 2013 have been the Cube iWork 10 and the Pipo W1. Both of them came with a type cover, but with different ones. Whereas the Pipo W1’s cover managed to satisfy with a solid metal ground-plate, leather flap and a multi-touch trackpad, the Cube iWork 10 had the better keyboard and a trackpad with physical buttons, but no leather and multi-touch.

The new Pipo W3 cover is kind of mashing-up the two older covers. It got a larger multi-touch trackpad with two buttons, a keyboard with a great key-travel and pressure points, indicator LEDs for stuff like caps-lock and a much more solid base, which makes the slate feel just like a notebook on your lap while using the cover. All this is a serious improvement, making the W3 even more of a workhorse. One thing we are missing though is the leather. The new felt-like material is one real dirt magnet.

The screen is another improved part of the W3. While the W1 came with a sub-FHD panel, the W3 is now featuring a 10.1-inch 1920×1200 IPS panel, which still doesn’t feature OGS however. The higher resolution means a much sharper picture, making it a pleasure to watch pictures and videos on this device. The colors are as amazing as they used to be with earlier Pipo slates and the brightness is up the standard that guarantees trouble-free outdoor use.

Intel’s x86 SoCs for tablets have always been quite some performance monsters, and while some might believe it is impossible to notice a difference between the Atom Z3740D and the now used Z3775D, we can certify there really is. The extra speed coming from the 2.4GHz max-clock is very noticeable when surfing on media-rich websites or using demanding applications like office suites or even video cutting tools. There’s something that became worse though, and that’s 3D performance. 6791 points in 3DMark’s Ice Storm Extreme aren’t much for a modern Intel Soc. It even is worse than with the Pipo W1. So what’s the reason for this gap? Well, we believe it is the combination of the higher screen resolution and less graphics memory. The W1 allocated a whopping 512MB of RAM to the Intel HD Graphics GPU, whereas the W3 only allocates 128MB in order to boost multi-tasking in exchange for a loss at 3D performance.

Another interesting part about the W3 is the internal eMMC memory speed. During our tests we noticed that the reading speed has been increased quite a bit (164MB/s), but the writing speed has been changed only a bit (50MB/s). Don’t worry about that though, as this is totally enough for everything you will do with this tablet.

We think there isn’t any reason to talk much about Windows 8.1 here, as this OS should be well-known among the majority of our readers these days. What we want to say once again though is, that Windows 8.1 is an excellent operating system for tablets. The workflow one can reach is amazing, as is the responsiveness. We also appreciate the possibility of running desktop applications on the go or even making the tab a full-blown computer by attaching an external memory with a HDMI cable. In terms of productivity, Windows slates are for sure way ahead their Android running competitors.

But there’s a catch, directly connected with the screens higher resolution. Windows isn’t fully optimized yet for screens with high pixel densities. Fonts and UI-elements need to be upscaled, else they would appear too small. Why this is working perfectly well across the modern UI interface, the opposite is the case with the classic Windows desktop. Some applications simply ignore the scaling level set inside the Windows control panel and look very small, including the 3G configuration tool. Some are simply not optimized and look blurry and pixely. While this isn’t anything overly dramatic, it still doesn’t look nice and leaves a bad aftertaste.

The number of Chinese tablets supporting the Huawei UltraStick is growing right now, which is something we like. The UltraStick is a removable (hot-plug capable) 3G modem, which means you can change the one you get with the W3 at any time for a model supporting LTE. This means you are saving money, as you won’t have to purchase a whole new tablet, once you wanna make use of LTE. During our test the UltraStick solution was working amazingly well, with one of the highest levels of reliability we’ve ever experienced while accessing the mobile internet with any wireless device. Even on a train ride it lost the signal very seldom, which is excellent for such a small device.

Featuring a 2 mega pixel front and 5 mega pixel rear camera, there haven’t been any changes compared to the Pipo W1. It even seems like the sensors remained the same, as the pictures taken with the W3 look awful. Those cameras are only suitable for video calls, nothing more. Bad thing? We’re like no, as no one will ever take his vacation pictures with a tab.

The battery capacity has been left unchanged as well at 8000mAh, which we don’t understand at all. After all, the high-res panel, the faster processor and the Huawei UltraStick 3G modem are all eating up energy, which of course means a worse battery life than the Pipo W1. Depending on what you are doing this means that you will run out of juice in between 5 to 8 hours. Still a very good battery life, but not outstanding.

The Pipo W3 is a consequent development of the W1, but is missing some important things like a larger RAM. This would have boosted the multi-tasking and 3D performance quite a bit. Also a larger battery wouldn’t be something we’d complain about, even if this would be traded in for a thicker device. Still the Pipo W3 is a very good tablet PC, and especially one we call a workhorse. It is perfectly suitable for productivity and made blogging on the go a breeze for us. If you aren’t in for mobile productivity but for entertainment yet still want a Windows tablet, we recommend you having a look at the devices offered by Teclast and Onda. After all the W3 currently priced at about 330 bucks in China, which is significantly more than those sub $200 slates, which still offer everything you need outside the business.

Thanks to German supplier Media-Kontor-Hude for providing us with a review unit.

Previous Nearly 1 million OnePlus One sold, OnePlus 2 expected in 6 months plus something new