Drones, especially those that have four propellers (i.e., quadcopters) are quite the ‘in’ thing this season. People have been buy these for their friends and family, and then end up keeping it themselves. That’s how much fun these little things are!

Although its usually companies like DJI and the likes that are in the news most of the time when we’re talking drones, a lot of up and coming, small and big time companies from China have been grabbing our attention lately. These Chinese OEMs have not only been making full-sized drones that are a pleasure to fly outdoors, but also some such as the Cheerson CX-10 and Bayang Toys X6, which allow you to have the pleasure of flying a quad indoors on a rainy day. 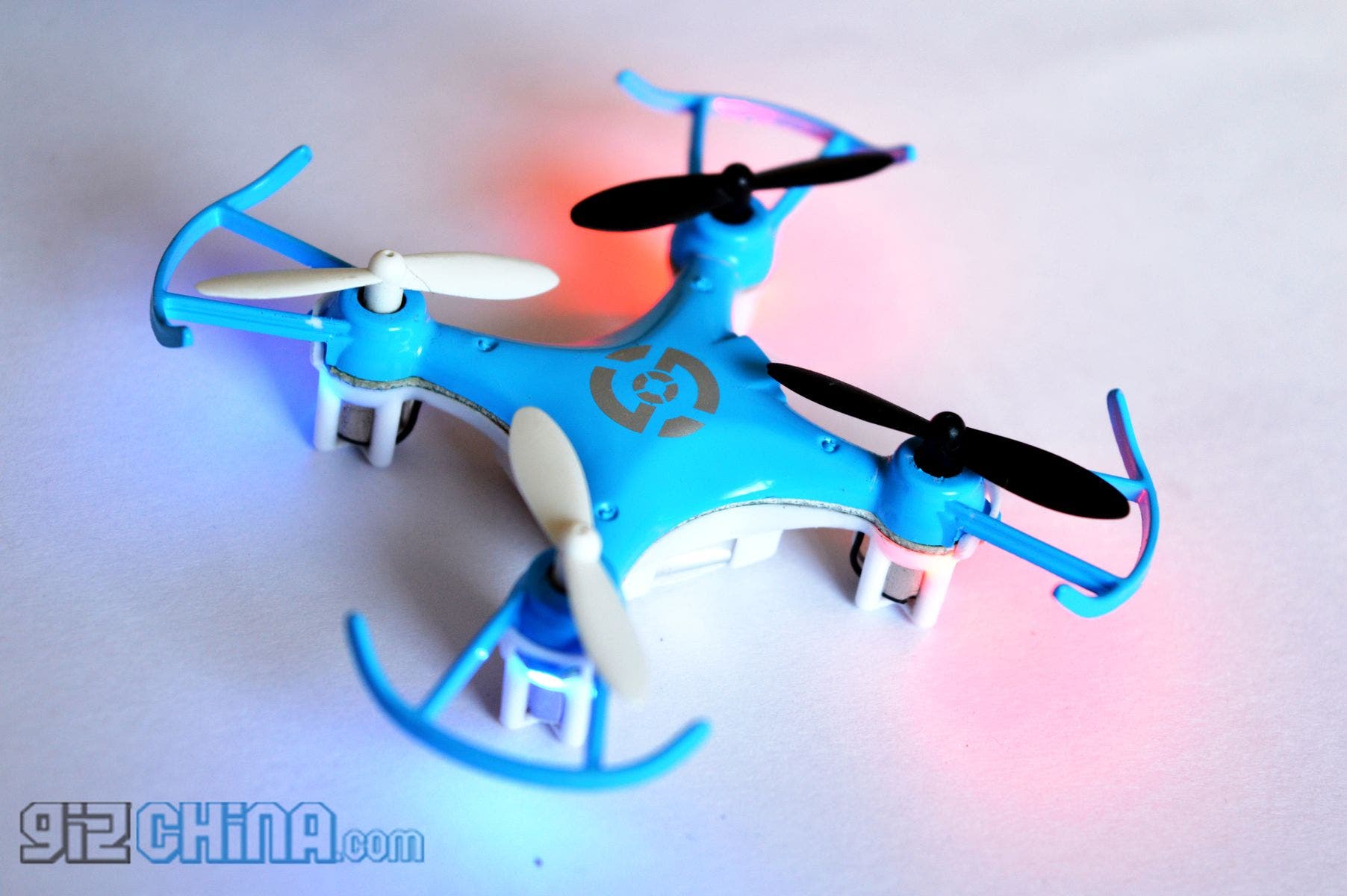 If you aren’t aware, the Cheerson CX-10 is the current world’s smallest commercially available quadcopter as of now. However, the little flier is meant more for the intermediate than the novice, since it has no prop guards out of the box. This is where the Bayang Toys X6 comes in with its full-fledged prop guards. Not only that, the X6 also comes with a much better controller, which not only is much easier to hold in the hands of an adult, but also has all the necessary trim buttons, etc. that are missing on the CX-10 one.

The quad itself looks a lot like the Cheerson CX-10, so much so that we’re convinced it’s from the same factory. Heck, it even bears the same logo on top of the body which seals the deal pretty much. But, like mentioned earlier, it’s the added prop guards that differentiate the Bayang Toys X6 from the Cheerson CX-10. 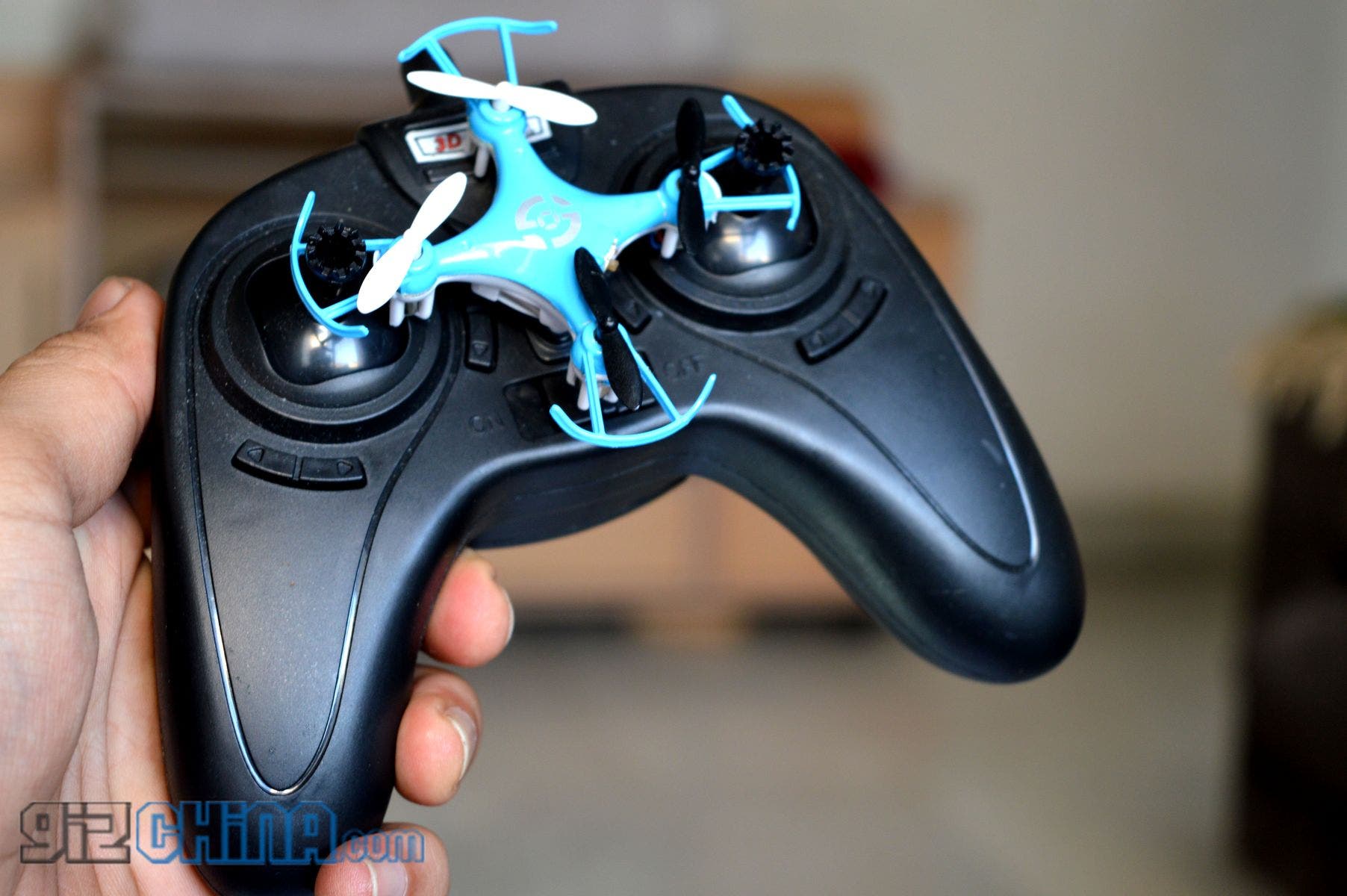 Not just that, the Bayan Toys X6 is also a lot easier to fly during the day thanks to the coloured props. In the night, the attached, colour-coordinated LEDs that sit next to the motors (blue and red) make orientation a breeze.

From edge to edge, the X6 measures 4cm, the same as the Cheerson CX-10. However, the prop guards add about 1.5cm each to make the quad 6.8cm in length, props in tow. Since the little drone is pretty delicate, there’s no option to take off the prop guards. This does take about 30 seconds off of the flight time, but we believe its much better this way. The props are extremely delicate and the extremely high RPMs mean that one crash could result in broken props. 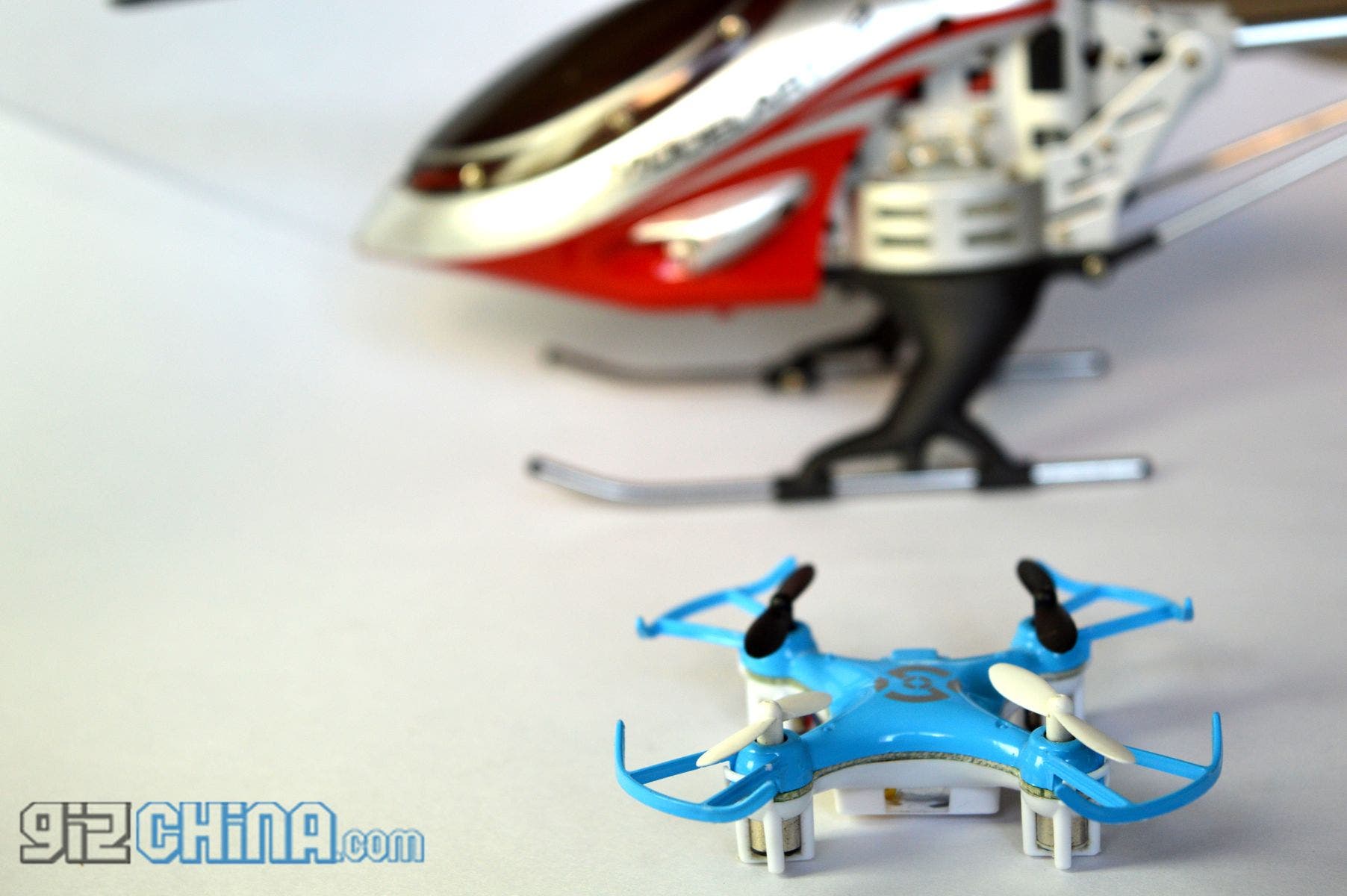 Speaking of broken props, you’re advised to fly the quad (i) in a room with a carpet laid throughout if indoors, or (ii) on a grass lawn if outdoors. If you don’t, and if you’re a beginner, you’ll soon end up with broken props after a certain number of crashes (which are bound to happen). Thankfully, the Bayang Toys X6 comes with another set of props which means you have time to order some sets from China. In fact, if available, you’re advised to get a few more propeller sets and perhaps a battery and another set of motors while making the purchase, if you mean to fly the quad for a few months.

The quad itself is extremely nimble, as you would expect. The controller can switch between three modes: 25%, 50% and 100%. These are basically levels of sensitivity; you’re best off starting with 25% till you’re confident of your ability to manoeuvre the quad around. An LED (red for 25%, green for 50% and red/green for 100%) on the controller and the number of beeps (one for 25%, two for 50% and three for 100%) tell you exactly what mode you’re in.  The yaw rate does change with each mode shift as well, which is something desirable. Once you get used to the added degrees of freedom, the quad is a hell lot of fun to fly even for adults.

With products such as this, there’s an extremely thin line that differentiates between lightweight and low quality. What makes it worse for manufacturers is that the position of this thin line is often very subjective. That being said, there are a couple issues with the quad, which is otherwise great value for money. 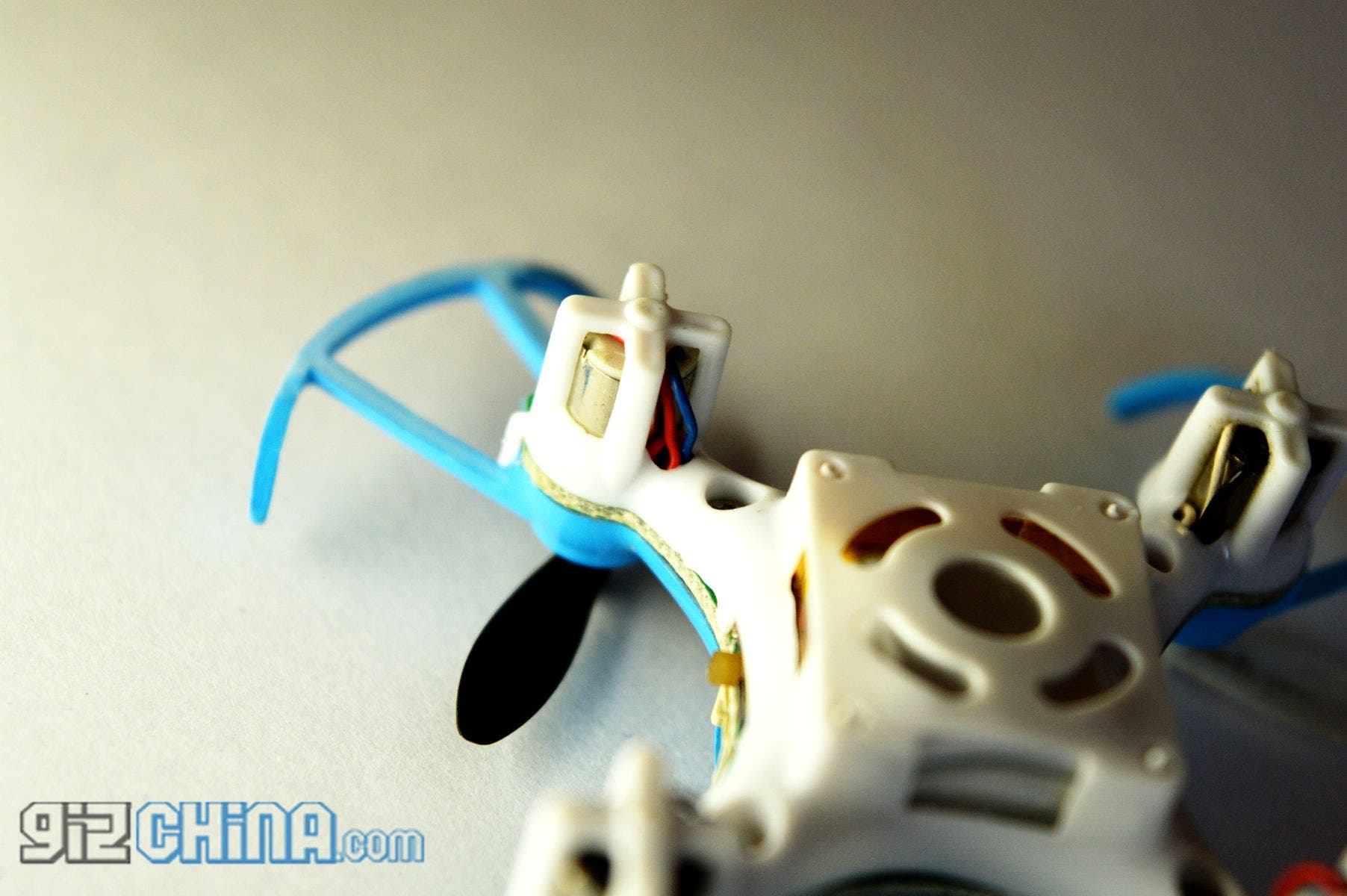 One, the props won’t last long. Especially so, if you’re a beginner. They also tend to attract hair on the floor, which makes the quad lose its balance. This means that you take off a prop to remove the wound strand of hair; this adds to the many inevitable crashes and decreases the longevity of the props. Thus, make sure to have a clean, hair free floor before taking the quad for a flight. Another gripe that we have with the X6 is that, like the Cheerson CX-10, the leads to the motors are exposed more or less. This exposes the risk of shorting, unless you’re willing to open the quad up and hide the leads in the frame itself, or simply enough, put a couple drops of hot glue to keep the leads in one place.

That’s pretty much it with the build issues. One thing that newbies might not like is the fact that the quad does not offer a user-replaceable battery (unless you’re willing to open it up). But that’s because the motors need some time to cool down before going for another high RPM spin. After all, they’re really, really tiny pieces of kit doing some high-tension jobs.

Note: To calibrate the quad, place it on a flat surface and hold both sticks on the controller simultaneously to the bottom right for a few seconds. This isn’t mentioned in the user guide.

Speaking of battery, the quad does about 4:30min of flight time which isn’t bad at all, considering it has only a 100mAh battery. It charges up in about 18 minutes, which again is not too bad. Please remember to unplug the quad from the USB lead as soon as its charged; the lead otherwise starts drawing power from the quad (to light the little in-built LED). 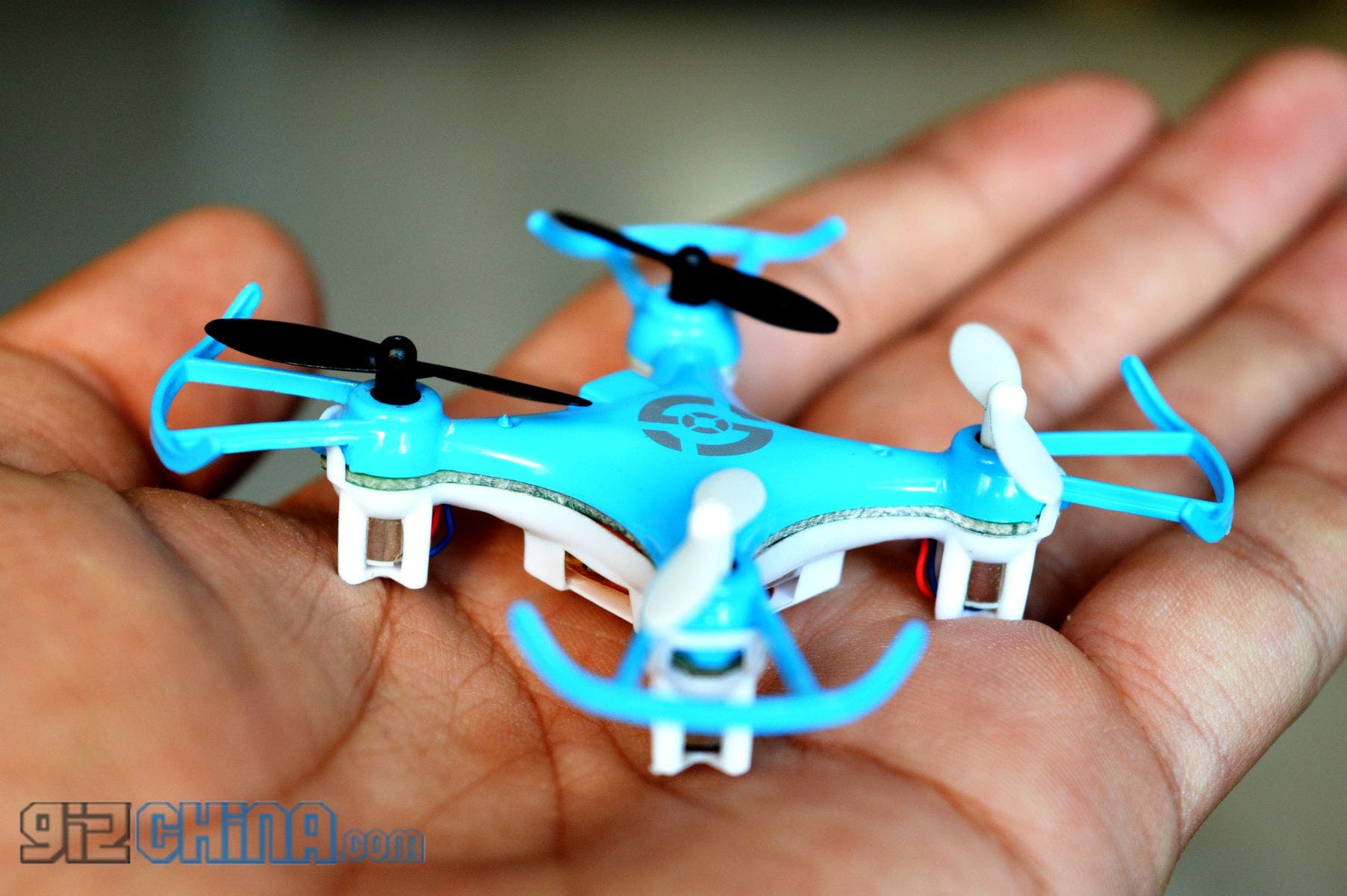 The Bayang Toys X6 is a great alternative to the Cheerson CX-10. At US$10 on top, you get a much better controller and added prop guards which make the quad one of the fun-nest things to do, indoors or outdoors. Just be sure to check for spares; what’s good is that Cheerson CX-10 spares should fit just fine… and the CX-10 is insane popular at the moment, so getting hold of your desired spare parts should be a breeze.

The Bayang Toys X6 can be bought at popular reseller Geekbuying for US$29, and is available in a variety of different colours including Blue, Green, Red, Pink and White.

Previous First Yureka sale over before you could even say Eureka!