Christopher from GizChina.de reviews the Teclast P98 Air tablet, and even shares his custom ROM so you can make your P98 run and perform like a dream!

Have you ever owned a device that you absolutely hated from day one, only to eventually fall head over heals in love it? Well that’s what happened to me when reviewing the Telecast P98 Air, I’ll go over all details in the following review.

The Teclast P98 Air was one of the first two tablets to make use of the Allwinner A80T octa-core processor. The very first available was the Onda V989, which we unfortunately had to send back, as it was unusable, slow, and had huge compatibility issues.

The issues with the Onda V989 were basically all down to that Allwinner processor, and with the Teclast P98 we wanted to give the SoC another shot. For specifications the Allwinner P98 boasts 2GB RAM, 32GB memory (with room for 128GB SD), 8000mAh battery, and 9.7-inch 2K display wrapped in an 8mm thick alloy body. If all that isn’t enough to get your heart racing then the fact Lollipop is making its way to the tablet just might!

So a promising specification and a nice design, so how well does it actually run? 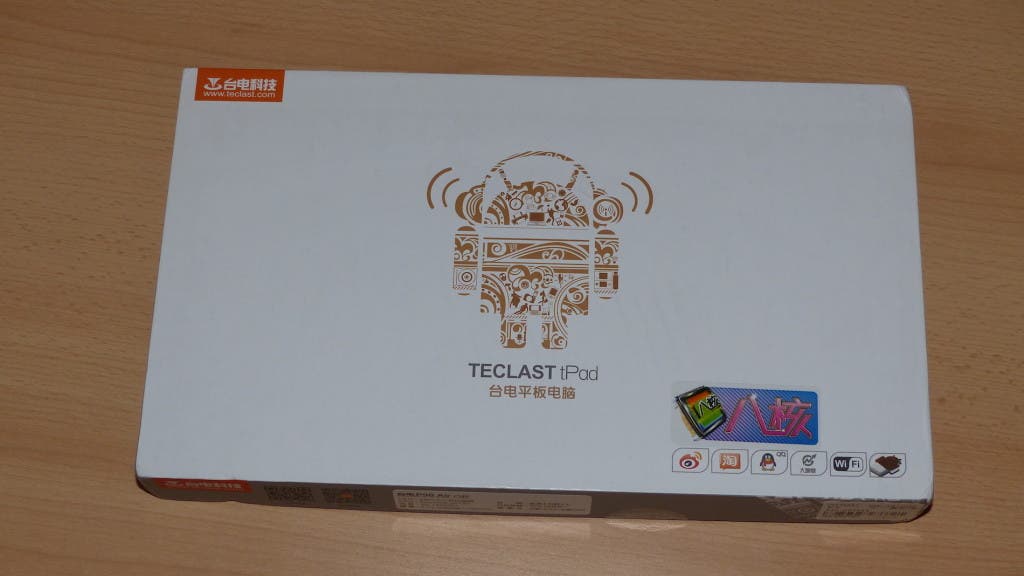 While Chinese phone makers do now release their phones with international packaging, tablet makers still ship all device in Chinese boxes. The box our Teclast P98 Air came is all in Chinese, but the various symbols and icons give us clues of what’s on the device.

Inside the box are no nasty surprises, and all the usual accessories are inside. Wall charger (2.5A), Chinese manual, micro USB 3.0 cable and OTG adaptor all present and correct!

First impressions were very good, with the design of the Teclast P98 literally blowing me away. Touching the tablet was as impressive as looking at it! It’s quite impressive at which price tags Chinese manufacturers are able to produce devices with a build quality that’s outperforming even some Apple products.

The Teclast P98 Air is simply flawless with its solid glass-covered screen, slim bezels and perfectly crafted piece of aluminum formed around the back and sides. No squeaking under pressure, no bending, no large gaps, even the physical power and volume buttons are solid and rattle free. The weight at 500g is just as impressive as the build, and adds to the quality solid feel.

Looking over the hardware of the Teclast P98, you might already becoming to the conclusion that it’s basically a slightly modified version of the Onda V989. I’ll agree that it’s a similar device, but once you set your eye’s on the display you will quickly change your mind.

The 9.7-inch IPS panel of the P98 Air boasts a massive 2,048 x 1,536 resolution and is extremely bright for a tablet PC. Outdoor use won’t be an issue at all with this one. What’s more, the panel features very nice color reproduction, being somewhere in between cold and warm. It’s just perfect, especially when viewing crisp 4K video!

Touch sensitivity is possibly the best I have experienced on a Chinese tab, totally on-par with the ones found on high-end devices like the iPad for example.

The build and screen are fantastic so what had me hate, then love the Teclast P98 Air? Here are the details.

To begin with the tablet had the very same issues as the Onda V989 we had back last year again. So apps crashing, very poor performance (to the point it felt like a dual core rather than octacore) and lots of compatibility issues. This time however, the tablet hasn’t been shipped back to China, instead it has been fixed by me (Christopher from GizChina Germany).

So how did I fix it? Basically I took what Onda and their developer community at ondaforums.com had done for the Onda V989 and created a custom ROM for the Teclast P98 Air. The fix makes the tablet fly, but don’t worry you don’t need to do all that as you can just download it all from here.

The reason for those issues mainly is the fact that Allwinner does indeed create amazing SoCs, yet doesnt perform so well at developing software. Both the Onda V989 as well as the Teclast P98 Air which was released a little later are based on the same framework, and that’s why both had the same issues.

The main problem with the original Allwinner configuration is, that the SoC is not reacting fast enough to increased workload, which makes the device appear very stuttery. Another problem is a little design mistake inside the SoC, which can cause the SoC to turn off all of a sudden under certain circumstances,  causing the crashes. Luckily for all of this there are software workarounds. To cut a long story short: “Chris’ custom ROM” achieved iPad smoothness and Antutu scores up to 70k points by unlocking the CPU to 1.8GHz vs. the 1.6GHz of the stock ROM, changing some driver configurations including the GPU driver and improving the CPU governor as well as a lot of other small things plus some improvements like a 8GB of app memory.

Now the Teclast P98 Air not only runs like a freshly oiled gear, no matter which apps or games you throw at it, but has fewer compatibility issues, especially within the gaming sector. We have to admit though, that Teclast is working on those issues the stock ROM has as well. The latest release “Chris’ custom ROM” is based on what was already a lot smoother than previous versions, and there is Android 5.0 Lollipop coming up, which many claim to be the final solution of all issues – at least on the Onda V989.

There isn’t much wireless to talk about this time, as the Teclast P98 Air only comes with Wi-Fi and Bluetooth. You are able to attach a 3G dongle through USB though. While using the Teclast P98 Air we noticed that the Wi-Fi is a little weak. It’s far from being unusable, but you definitely notice a limited range going on here. Again this won’t be much of an issue for most, yet it could be for those of you generally suffering from a weak Wi-Fi signal. Using Bluetooth the signal strength doesn’t seem to be limited in any way with up to 12 meters of reach using a Bluetooth speaker and flawless support of Bluetooth LE devices.

One far more interesting topic is how well the Teclast P98 Air handles multimedia playback. Now the Allwinner A80T isn’t just a powerhouse for apps and games, but for video content as well, which also is the reason why we mostly see this SoC within set top boxes these day. It’s capable of playing not only 1080p videos, but 4k content as well. It doesn’t stop there as we even stumbled upon playback support for 3D files, which is handy when pairing the slate with your 3D-enabled television. The SoC is even  capable of playing a 4k file at 60fps in multi-window mode while browsing a media-rich responsive website without any lags. Sounds impressive, and it really is impressive.

Audio quality is impressive as well with flawless, loud, bass-heavy and distortion-free stereo playback through the internal speakers and a well-balanced output through the 3.5mm headphone jack. We have two things to complain about though, first being the fact that the Xiaomi Pistons v2.1 somehow do not work with this tablet, second being the fact that the stereo speakers are a little misplaced in landscape mode, as they are both on the right or left side then, depending on how you’re holding the device.

While the camera specs of this tablet might seem impressive to you with a 13 megapixel rear shooter along with a LED flash and even support for recording 4k videos, in reality it isn’t. While the camera is surprisingly good for what we are used to from Chinese tabs, the pictures are far from being usable to show off your latest vacation and the recorded 4k videos do look more like 1080p. Are we complaining? Not at all. No one will ever take serious pictures with a tablet PC, just because of the sheer size.

Featuring a 8,000mAh capacity, the Teclast P98 Air might sound like a real battery monster that you could even use as a power bank.  While the Allwinner A80T still is better at power-saving than those Intel x86 BayTrail SoCs, while providing a similar performance, it is still quite a battery hog, much more so than for example the MT8392T.

If the battery life depends on how you use the tablet. We stuck to the normal mode for productivity and multimedia and only hit the speed mode setting in case we wanted to play games. This along with medium brightness settings, we’ve reached screen-on times of in-between 6 – 8 hours, depending on the workload. Watching a 4k movie non-stop was the biggest battery-drainer to our surprise, resulting in 5.3 hours screen-on time. Taking full advantage of the A80T’s capabilities by staying in speed mode all the time, results in a screen-on time of 3 to 4 hours, again depending on what you do. That’s not a bad result, but far from being high-end. Charging the slate will take you around 3.5 to 4 hours with a 2.0A charger.

This time building a final conclusion isn’t all that easy. On the one hand we have one absolutely amazing tablet PC here with a perfect build quality, beautifully crafted design, amazing screen, insane performance, great multimedia capabilities and a good battery life. But on the other hand there are those software bugs you are confronted with out of the box and the need of flashing before having a working tablet. This is something the average consumer just doesn’t want to do, nor should they have to.

So in the end we have to say the following: If you have an open mind towards software mods, there’s no reason why you shouldn’t consider giving the Teclast P98 Air a shot. After all it is one of the most powerful Android tabs you can get right now plus features one of the best price-performance ratios we’ve seen so far. But if you just want to have a device  that’s working without the need of software mods, that you just unbox and start using, stay away at all cost. You won’t be happy with this one. Instead we’re recommending you the Cube Talk 9X.

Previous Take a pinch of salt: Meizu rumoured to be working with Nokia on new MX4 model

Next Hannspree's Windows 8.1 PC-on-a-stick comes with licensed Windows (and available in Europe)