One of the big complaints we all had about the Xiaomi Redmi 2 was the lack of RAM, but a new TENAA filing shows that Xiaomi have fixed this issue.

Xiaomi announced the Xiaomi Redmi 2 not so long ago to a mixed reception from fans around the world. The general opinion is that the Redmi 2 is a good phone for the low asking price, but not the successor we were hoping for.

One of the issues was that fact the 699 Yuan phone boasts just 1GB RAM, at a time where most similar phones are starting to see an increase to 2GB RAM. 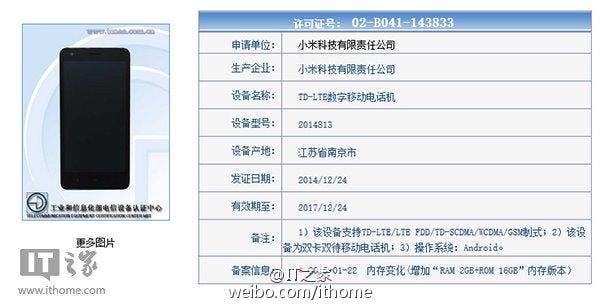 A recent TENAA approval shows that Xiaomi have taken this in to consideration and will also launch a 2GB RAM model in the near future. The phone will get the same Snapdragon processor and colourful rear shell options as the first Redmi 2, but will likely cost slightly more.

Previous LeTV could beat the Meizu M1 Note and OnePlus One with new phones! Leaked specifications

Next Vivo X5 Max L is larger but still thin at only 5.1mm