When Oppo launched the R5, we’ve been blown away. 4.85mm – that’s how thin this phone is. As a matter of fact, that’s the same thickness that the battery alone does feature in most phones. Still Oppo somehow managed to squeeze in a Snapdragon 615 octa-core SoC, 2GB of RAM, 16GB of memory, a 5.5-inch Super AMOLED panel, a 13 mega pixel camera and a 2,000mAh battery with support for Oppo’s VOOC rapid charging technology. But is a phone that thin really something that’s worth the price-tag or just a gadget that’s nothing more than nice to have? We tried to figure that out for you!

Unboxing the Oppo R5 is pretty much the same experience you get with all the other Oppo devices. It comes in the same square plastic box with rounded edges as all their other phones available these days. Inside: The phone, a VOOC charger, a VOOC charging cable, Oppo headphones and a rear protection cover made from transparent plastic. 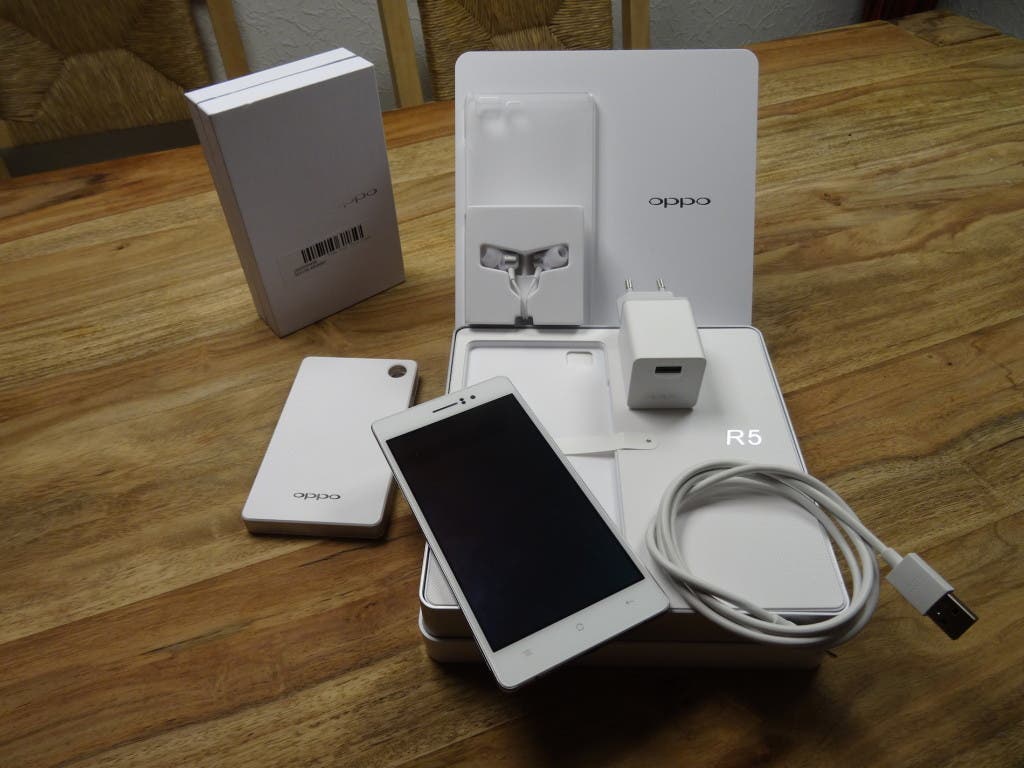 The Oppo R5 itself does look quite stunning. The main eye-catcher of course is the thickness. With exactly 4.85mm (without the camera) it is the second-thinnest phone right after the Vivo X5 Max. In case you heard about rumors telling the Oppo R5 in reality is 5.15mm thick, we can tell you that this is nonsense. There is a protective film applied onto the screen which indeed makes the device thicker, but after pulling it off you get the advertised 4.85mm.

The Oppo R5’s front is white with silver touch buttons below the screen, which by the way features quite thick bezels. Somehow disturbing is the fact that the touch buttons do not light up and that there is no status LED that we somehow expect to get with a phone priced at $499. The remaining body is mainly made from one piece of metal, which includes the frame and a larger part of the rear. The upper and lower areas of the rear are covered by white pieces of polycarbonate. The upper one houses the rear camera which is standing out 2mm, the LED flash and a camera microphone. On the left side the SIM tray is placed, the lower side comes with a micro USB port and voice microphone, the left side houses the on / off switch and volume rocker. There’s no 3.5mm headphone jack on the phone and you will need to use an adaptor for that.

All in all the handset is looking very nice and sleek. There are no loose parts and no squeaking. It even is quite impossible to bend the phone, which might make some iPhone 6 users a little jealous.

The Oppo R5 comes with a 5.2-inch full HD Super AMOLED display, which is the same screen technology used on Samsung devices and the UMI Zero, becoming more and more popular with Chinese phones these days. We probably don’t have to tell you that OLED panels are amazing. The level of color-intensity and contrast plus the perfect black those screen provide is simply outstanding. Of course such intense colors aren’t anyones piece of cake, but we really do love it. What’s more, this screen is perfectly readable under direct sunlight, much more so than any LCD panel out there, making it a pleasure to use on the go.

Now with the Oppo R5 there’s a catch though. We are not sure if this was just a problem with our review unit or if all devices have this, but when pushing the brightness down to the lowest level we noticed that one half of the screen does look a little greyish, while the other half doesn’t. This does look strange but isn’t that much of an issue since it can be resolved easily by pulling the brightness up a little.

The Oppo R5 is (or was) the first Oppo phone to come with a 64-bit SoC. Vendor of choice is Qualcomm and their Snapdragon 615. This SoC is based on eight ARM Cortex A53 cores of which four are clocked at 1.7GHz and another four at 1GHz. Graphics processing is done by the Adreno 405 GPU. On the paper this SoC doesn’t seem to be much different from the MT6752, yet the difference is huge and we mean that in a negative way – unfortunately.

The Snapdragon 615 is significantly behind Mediatek’s competitor not only in benchmarks but in real-life as well. The performance really isn’t on a level you would expect from an up-to-date mid-range device. The OS is suffering from lags, Apps sometimes take ages to open up and doing multi-tasking will result in a flash-back to the good old days of using phones with the MT6582 SoC. There has been a firmware update recently which improved the performance a little, yet it seems there isn’t much more left to squeeze out of this SoC. The lack of performance will be especially notable when playing games. Not even older 3D games like N.O.V.A. 3 are running smooth – it’s more like unplayable. We also doubt that this is due to compatibility, as other games aren’t running well as well, while they to on Mediatek’s competing SoCs, the MT6752 and MT6732. This has been a real let-down for us as we expected way more. There still is some hope left for the update to Lollipop though.

Luckily the bad system performance doesn’t affect the ability of playing videos. We tested several full HD files including streaming content through YouTube and didn’t stumble about any issues here. They were running very smooth without micro lags or fractals. Audio quality is very good as well, even through the internal speaker of which the Oppo R5 does only feature one – the phone call speaker. It’s very loud and despite not much room being available for some resonance going on it features surprisingly heavy basses. Something we didn’t like at all is the missing headphone jack. Using an adaptor for headphones which has to be plugged into the micro USB port isn’t the most convenient solution. Vivo managed to build in a 3.5mm jack into an even thinner phone, so we don’t quite get why Oppo couldn’t do that. 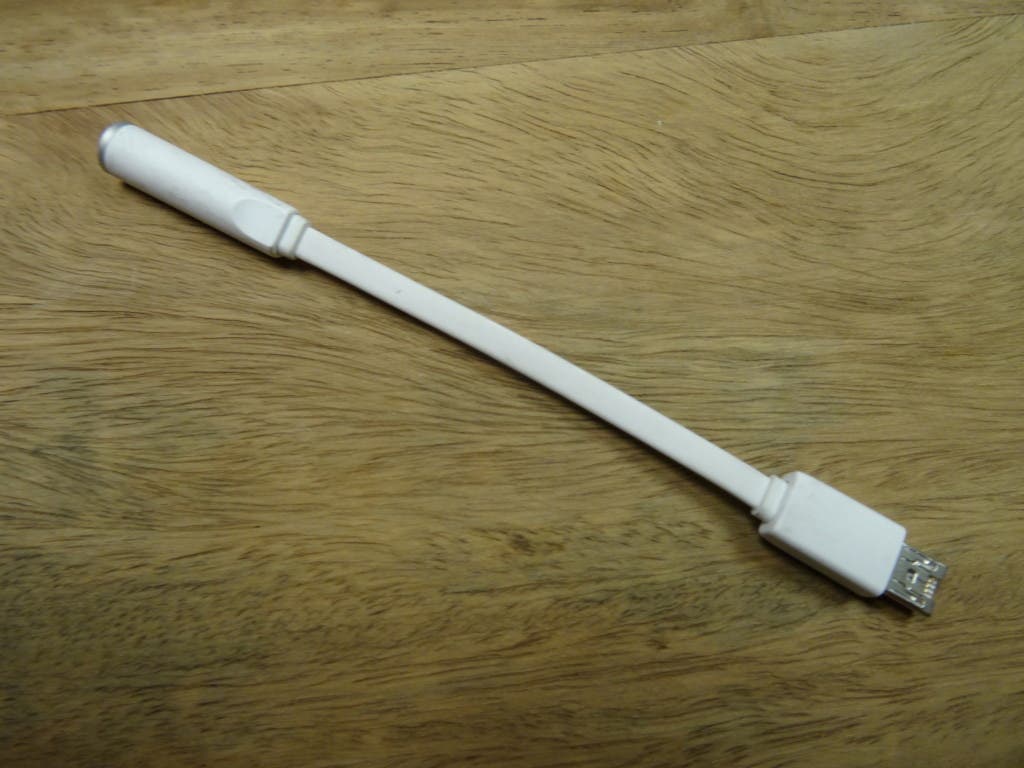 As far as reception quality goes there isn’t much to say simply because of the fact that we didn’t encounter anything negative here. It’s working flawless all the time and phone calls had a very good quality. GPS was working outstandingly as well with fix times of below 20 second even within closed rooms and no window nearby.

The Oppo R5 comes with a 13 mega pixel rear camera and a 8 mega pixel selfie shooter on the front. It for sure is no camera phone, but it isn’t even advertised as such. The camera does quite some nice pictures under daylight but kinda sucks in the dark even though the LED flash is very bright. We also didn’t like the video quality which is far away from being perfect. All in all we consider the camera as a little disappointing but not as a total failure.

2,000mAh doesn’t sound like a lot and it really isn’t. Battery life was even worse than we expected it to be. Without making use of the power saving mode the battery did last roughly half a day, which is nothing. Kicking in power saving will extend the battery life to a days, but we never were able to use the phone longer than until 7:00PM which really sucks if you want to go out in the evening. It seems like the Snapdragon 615 is a very inefficient chipset when it comes to power consumption and we hope that this can be improved in the future with software updates.

Luckily the Oppo R5 does support VOOC rapid charging which most Oppo phones do support these days. This means that you can re-charge the battery to 70% within only 30 minutes. A full re-charge from 0% to 100% takes about one hour. This really is fast and you can literally watch the phone charging. Still this doesn’t fully cover up the flawed battery life in our opinion, especially due to the fact that those cells have a limited cycle count you will eat up in no time. Of course you can’t replace the battery yourself, so we really have some issue going on here.

Ordering the Oppo R5 from OppoStyle at €399 in Europe or $499 internationally won’t just buy you a new phone but a free Oppo VOOC power bank worth 70 bucks as well. This power bank does offer a capacity of 6,000mAh which is enough for two charging cycles of the R5. It does re-charge the phone as fast as the wall charger, which can be handy on the go. Re-charging the power bank is also done through Oppo’s rapid charging technology which takes about 1.5 to 2 hours depending how much juice you left inside. We did really love the fact that you don’t need to carry around your USB cable to use the power bank, as it comes with a built-in charging cable. Thanks to the slim Oppo R5 you can even carry around both devices in one pocket even though that doesn’t make much sense as it would be easier to just buy a thicker phone with a larger battery.

The Oppo R5 is a beautiful handset which is quite impressive as far as technology goes, but fails to fully convince us when it comes to battery life and performance. We just don’t like if we have to adapt the way we use our phone on a daily basis to a bad battery life a device has just because there was some design-target that had to be met. This is the reason why we consider the Oppo R5 more of a failure than a great invention. It might be a great device for those who mainly care about design, but anyone after a functional smartphone should stay away from the Oppo R5 at any cost. $499 really can buy you some amazing handsets and shouldn’t be invested into something like this.