Looking at the budget tablet market in Europe or America we for sure see a lot of devices, but nothing that would blow us away. This isn’t much different with the Chinese market. Of course you get slightly better specs for the same amount of money you spend on devices in your home country, yet still nothing mind-blowing. Well, that’s been until recently. With the availability of devices boasting Mediatek’s latest 64-bit SoC creations featuring a good amount of more boom for the buck at similar price levels like previous devices, gadgets featuring older Mediatek SoCs actually do become way cheaper now. Exactly this is the cause for what’s happening right now: We see new devices popping up at insanely low price-levels, totally unreached on the western markets.

One of those new devices that catched our attention is the Colorfly G708. Don’t worry if you’ve never heard about Colorfly before, as tablets aren’t the main business of the company “Colorful” that’s behind this brand. Colorful is more famous for making high-end MP3 players and graphics cards. Still they somehow managed to create quite an impressive slate boasting a 7-inch screen, octa-core SoC and 3G access at only $80. If you wonder if such a potential powerhouse for the cheap can be anything good, you hit the right place to be as we are going to answer you this question right now!

Unboxing the Colorfly G708 already was quite a surprise. We did expect the most simple packaging possible yet were delighted to see a black “flip to top” box inside a white wrapper with Colorfly branding. Opening the box didn’t unveil much as besides the tablet the box only packs a flat ‘n black micro USB cable, a 2A wall charger and a warranty card with quality check stamp placed inside a well designed envelope. 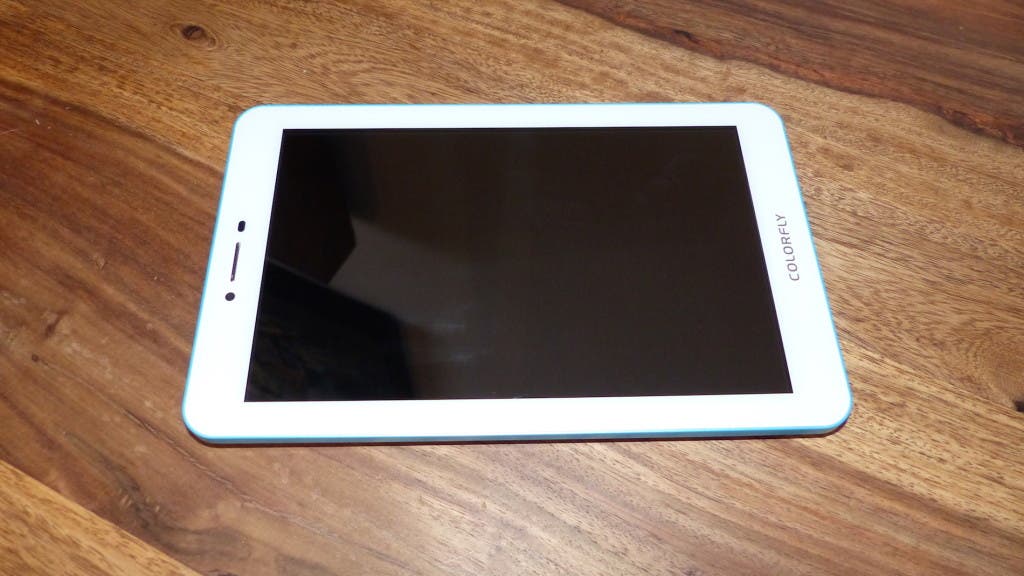 The tablet itself might look like what you call a little childish, being all-white and featuring a baby-blue frame that actually looks a little metallic yet is still made from polycarbonate like the whole remaining body except the front, which is glass. However, following the motto “don’t be so serious” we wouldn’t call the slate ugly. It might just not be everyone’s piece of cake.

Spread across the tablet’s frame we find a voice microphone, the usual hardware key combination of power button and volume rocker and a 3.5mm headphone jack along a micro USB port with OTG support on the top. The front camera, call receiver and sensors are located above the screen. Looking for touch buttons below the screen will remain without a result as there only is one silver Colorfly logo present.

The rear contains again one camera, a Colorfly logo on the bottom area and a pattern consisting of lines which doesn’t only look nice but also makes up for the lack of grip due to the slick polycarbonate. The upper part of the rear can be pulled off, giving access to the micro SD card slot and micro SIM slot.

To our surprise there isn’t much to complain about the build. It feels solid, there are no large gaps and edges and if you shake the device you will hear absolutely nothing. The only thing we noticed is that you can push the rear of the slate inwards slightly, which does make noises indeed but is nothing that would happen without force. What’s more, the Colorfly G708 isn’t quite the slimmest tab out there at 185 x 117 x 11mm and 264g of weight. 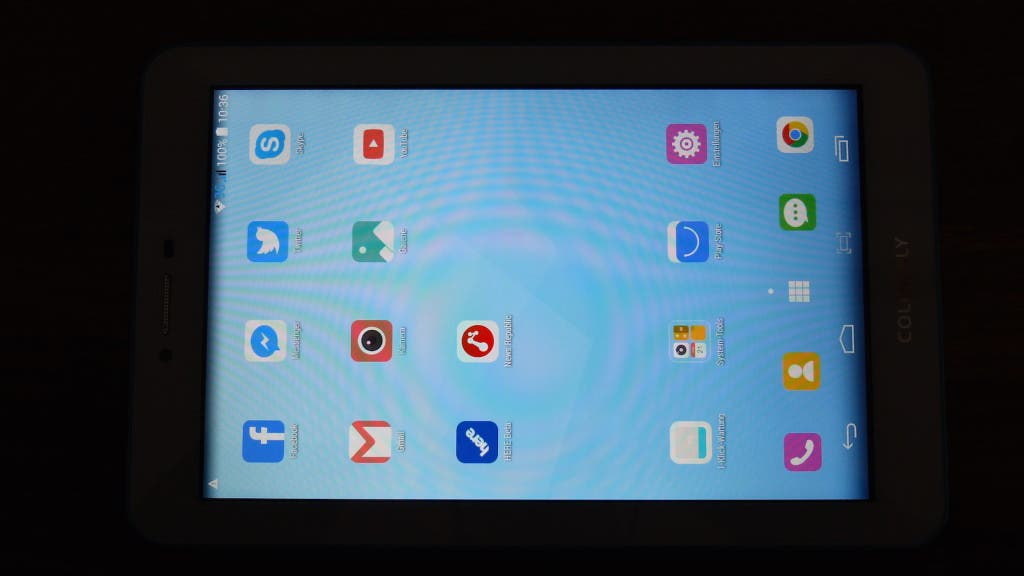 One of the biggest reasons for concern when it comes to low-cost devices often is the screen. Let’s face it: You can’t expect high-end on the low-end. What you can expect though is a screen that actually is usable and doesn’t make you suffer from eye cancer within minutes. The Colorfly G708 definitely is delivering here, as apart from a rather bad contrast which makes colors look a little washed out and missing OGS this 7-inch panel really isn’t all that bad. You might say that 1280 x 800 pixels of resolution are bad, but actually it isn’t. We never got this pixel-fetish going on these days. Even if you got used to a high-res screen, you will get used to this panel in no time. It only took us a day and we didn’t even notice the lower pixel density anymore. Indeed you can’t even see single pixels if you hold the tablet away from your eyes in a normal distance. You need to come close to about 14cm until you can see them.

That being said, we’ve been satisfied by the screen at this price level. Brightness is very high, enabling barrier-free outdoor use and the digitizer is reacting very precise and without much pressure. We also did like how the finger glides on the glass, making it much easier to operate the device.

Being equipped with a Mediatek MT6592M SoC, featuring 8 ARM Cortex A7 cores clocked at 1.4GHz and a Mali 450MP GPU the Colorfly G708 is much ahead anything you probably expect to get at $80. Of course the 1GB of RAM aren’t that much as are the 8GB of internal memory, yet we think that still is acceptable inside such an affordable device. After all this device isn’t supposed to be high-end and 1GB of RAM still are enough for basic multi-tasking, internet surfing and of course some older games. During the time we tested this device we’ve been well impressed by how well those old Mediatek SoCs can make a low-cost device perform. Larger websites: No problem. Full HD videos: No problem. Older gaming favorites like Dead Trigger 2 and Zombiewood: You name it, no problem! We believe the benchmark results below should do the remaining job and switch right to the next chapter.

The Colorfly G708 is running Android 4.4.2 KitKat which has been left mostly unmodified. The only changes Colorful did incorporate are a pre-installed Lewa Launcher which we removed immediately due to it being quite buggy and a screenshot button that has been added to the software button bar. The latter one we didn’t like so much as it happened numerous time that we hit the button by accident, taking a screenshot without wanting it. It probably would’ve been better to move this button into the quick-settings. Another rather negative thing is the fact that only 1GB of the internal memory can be used for applications. 1GB is fine if you are using a micro SD card and only run apps on the slate, but as soon as you install a few games you will run out of memory quickly, as you will never be able to move the entire app from the internal memory to the SD card.

There are positive things to report though, and that’s the excellent system performance and the fact that Colorful is updating the system. During the time we tested the device two OTA updates arrived and we hope this will continue for a while, maybe even with a Lollipop update arriving within the next months.

After a whole bunch of exciting things to tell we now hit a less exciting topic, and that’s audio quality. Both through the internal media speaker and headphones the tablet sounds just awful. We’re not exactly sure why this is the case, but it appears to be a software bug which hopefully will be fixed with some future OTA update. The bad audio quality is especially disappointing due to the fact that Colorful is known for being a manufacturer of high-end audio players which would make you think that something like that couldn’t happen. Well, world is full of surprises and this is just another one.

Being used to low-cost devices not offering outstanding connectivity the Colorfly G708 came out to be quite a boomer here. Throughout our tests we’ve been able to enjoy flawless reception quality of both 2G and 3G networks. The signal strength usually has been one bar below the one of an high-end phone under similar circumstances. This doesn’t only ensure mobile internet access, but a good audio quality during phone call as as well into both directions. The only thing we have to complain is the volume which could be a little higher and the matter of fact that this slate does only support WCDMA at 2,100MHz.

Wi-Fi and GPS did totally blow us away, which again came as a surprise. With most devices we have to switch routers while moving through the building, but with this tablet this wasn’t the case, meaning that it does feature a very good Wi-Fi antenna. This does apply to the GPS as well, which for an old MTK chipset is working outstandingly well. When we went outside for the GPS test we expected not to get a signal away and pretty surprised to see a fix for 8 satellites after just a few seconds with the accuracy being 2 meters. That’s really far ahead anything we would’ve expected from a $80 tablet PC.

A 2 mega pixel rear camera and a 0.3 mega pixel front camera doesn’t sound all that good? And yes, you are right. Both cameras come without auto focus and LED flash and the overall quality isn’t anywhere near the level it would need to be to take proper pictures. Both cameras are good for video calls or quick snapshots and that’s it.

Guess what? The battery life actually is one of the most amazing parts about the Colorfly G708. You might wonder if we are still completely sane, as 3,000mAh in a tablet boasting a MT6592M SoC might not sound like the battery monster everyone would like to own, but this tablet is just a perfect example for the fact that it doesn’t only need a lot of capacity, but a lot of optimization of the remaining hardware and software with regards to energy consumption as well. Exactly that’s what Colorful have done amazingly well here, as the tablet is able to reach a massive 8 hours of screen-on time with enabled Wi-Fi, 3G and about 30 – 40% of brightness, as the PC Mark battery benchmarks was able to demonstrate. We used this tablet every day during work which resulted in an average battery life of two days. Even more exciting: The G708 does support fast charging. It only takes a bit more than one hour and you are good to go again. Amazing – that’s how we call it once again.

Who would’ve believed that $80 can buy you a full blown tablet PC that actually is more than usable? Probably no one. After one week of using the Colorfly G708 we are still amazed by how well this device does perform. It is capable of handling everyday office tasks, features an outstanding battery life and a good build quality. What else do you want at such a low price? There really isn’t anything left to say except the fact that we can give you a full purchase recommendation for this device if you are looking for a very affordable couch-surfing, e-book, navigation or office tablet while being able to cut down on the display-needs.

Thanks to eFox-Shop who provided us with a review sample.

Next Wickedleak tease their new Titan model in promotional images