Indian phone maker Wickedleak are teasing another new smartphone that they plan to unveil in the coming weeks.

Wickedleak have begun promoting their new Android smartphone named the Wickedleak Titan. Obviously at the time of writing the full details of the phone haven’t been disclosed, but a few hints in teaser images have grabbed out attention.

In the promotion material Wickedleak are using the number ‘4’ to promote various details of the phone. “4 x 4” rear camera is rumoured to be a 16 mega-pixel Sony sensor while the “4 x 2” on the front an 8 mega-pixel. The teasers also ask what “4” could mean? Suggestions which have been offered range from the possible size of the battery, e.g 4400mAh, or even 4GB RAM. Personally we think it will be something a little more down to earth such as 4G LTE from a 64bit Mediatek processor. 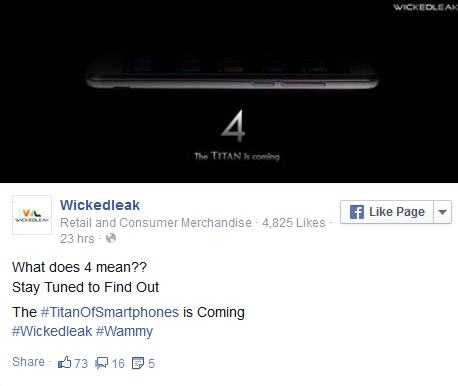