The last flagship we saw from Gionee was the Elife E7, and with that phone now heavily discounted we have to wonder what’s next? Could it be the Gionee Elife E8.

We know that Gionee are planning to launch a new thin phone at MWC, but could they also be preparing a new flagship device to replace the ageing Elife E7 too? Well that’s what leaks from today are suggesting, and if accurate it’s one to keep an eye out for.

Leaked specifications claim that the next generation Gionee flagship phone could boast a larger screen, more RAM and higher resolution camera than seen on the previous phone. The specifications aren’t firm and suggest either a 5.7-inch or 6-inch display are candidates for the new phone and Android 5.0 Lollipop. 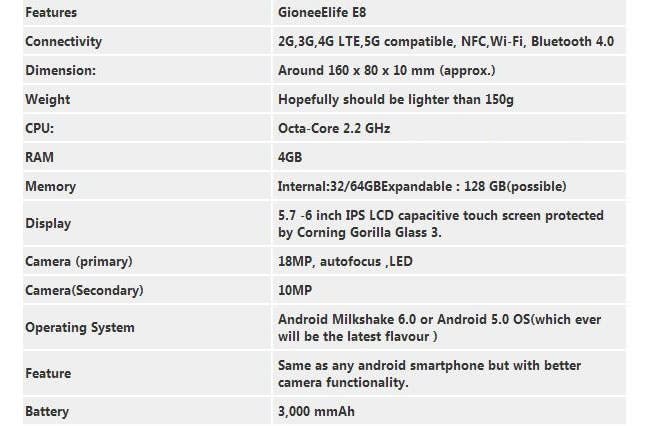 Specifications go on to say that Android 6.0 may also be consider the OS of choice for the octacore 2.2Ghz chipset, which will enjoy the luxury of 4GB RAM. Other details include an 18 mega-pixel rear camera, 3000mAh battery, LTE and a low weight.

The hardware sounds good, perhaps to good to be true, but we will certainly be on the look out for the next Gionee phones.

Previous How long will it take GooPhone to clone the Galaxy S6 now it leaked?

Next Poll: Rumours of a Chinese Nexus, Who do you want to make it?