Huawei’s latest tablet isn’t much larger than the biggest flagship phones and you can even make phone calls on it? Is this really a small tablet or a large phablet?

In the past we had seen Android phone makers blur the lines between tablet and phablet, but we though we may have finally put those days behind us until we entered the Huawei media city at MWC.

The Huawei Mediapad X2 is the 2nd generation Mediapad and features a more glamorous gold finish which matches the Huawei Mate 7, oddly enough this tablet almost matches the Mate 7 in size too. 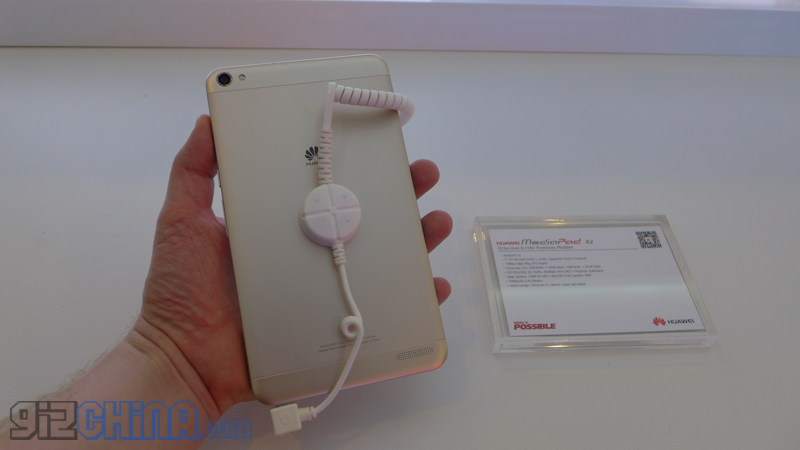 It’s almost as though that Huawei really wanted to make a huge phone and thought the best way to get away with it was to brand it and market it as a tablet. So the Mediapad X2 gets the narrow bezel treatment, is quite lightweight at only 239g and measures only 7.18mm.

Like a lot of the newer Huawei products the Mediapad is a lovely looking device, and although I don’t know if I should call it a tablet or phone, I would happily give it a home in my backpack once I feel the need to replace my MiPad.

The 7 inch display offers a resolution of 1920 x 1200, while Android 5.0 Lollipop (with EMUI) runs on a octacore Kirin processor and either 2GB or 3GB RAM. Those of you keeping up to date with the latest Huawei processor tech will recognise the 930 in the X2 as LTE enabled meaning 4G comes as part of the package, as does a 5 mega-pixel front and 13 mega-pixel rear camera.

Huawei didn’t confirm the cost of the Mediapad X2 but imagine they will make it publicly known along with availability very soon.

Previous So the OnePlus One is finally going to be available in all EU countries!