Xiaomi aren’t the only ones to have a new sports action camera this week, ZTE also had their first such device on display at MWC.

GoPro have made such a good job at building a usable action camera that anyone can own, that a whole new industry has been created just to compete with them, with the latest rivals coming out of China.

We have already seen SJ Cam, and the Xiaomi Yi action camera, but now a larger player is in the field. 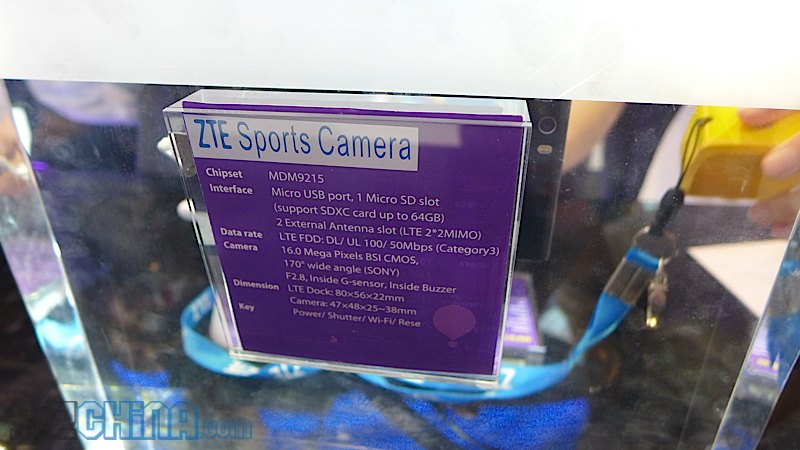 ZTE made no song and dance about their ZTE Sports Camera at MWC, only one yellow device was their to be seen and it was quite clearly an early pre-production sample. Specifications are promising with a 16 mega-pixel Sony camera, space for up to 64GB SD cards and even an option LTE dock for transferring recorded video and photos.

What wasn’t mentioned was the video capture support. We are guessing at least 1080 as the camera sensor seems to be the same as the one Xiaomi are using, but with GoPro now on 4K users might be excepting more.

Apparently the camera will come with an external case to keep it waterproof and to protect the large 170 degree Sony lens, but the case wasn’t on display. ZTE had the Sports Camera linked up to a smartphone via WIFI which can show a live preview, useful for getting alignment correct.

From what we saw this looks like a solid entry in to the action camera market, how well it will sell is based on the performance, final specifications, availability and pricing, all of which will be finally announced in the second half of 2015.

Next Xiaomi power banks, headphones and more to be sold officially in Europe via Mi.com