Rumour mill is rife churning out word that the next Nexus phone will feature a Huawei chipset. Although we’re far from confirmation on that as yet, but a little bird told us a couple days back that it could be the Kirin 930 that rocks beneath the next Nexus.

Today, however, a contradictory report landed in our hands from nowhere else but the homeland of Kirin chipsets, i.e., China. It appears as though the rumour mill was quick to jump the gun on the Kirin 930; it might well be the 940 or even the more powerful Kirin 950 that powers the next Nexus phone.

Of course, this left us curios about what exactly the Kirin 940/950 were about. Thankfully, there’s a bit of info on that as well; all the three SoCs (930/940/950) will feature essentially the same architecture of a quad-core set of A53 cores and another with A57 cores, with the main difference in the clock rate.

According to the same report, the Kirin 940 will debut between the 2nd and 3rd quarters of this year, whereas the more powerful Kirin 950 will show up in either the 3rd or the 4th quarter. This means that the Nexus phone will take its own sweet time in coming, if this report has any truth to it.

More details about the chipsets can be found in the chart below; do let us know what you think of the new reported HiSilicon Kirin SoCs and the whole idea of a Nexus phone being powered by a Kirin processor. 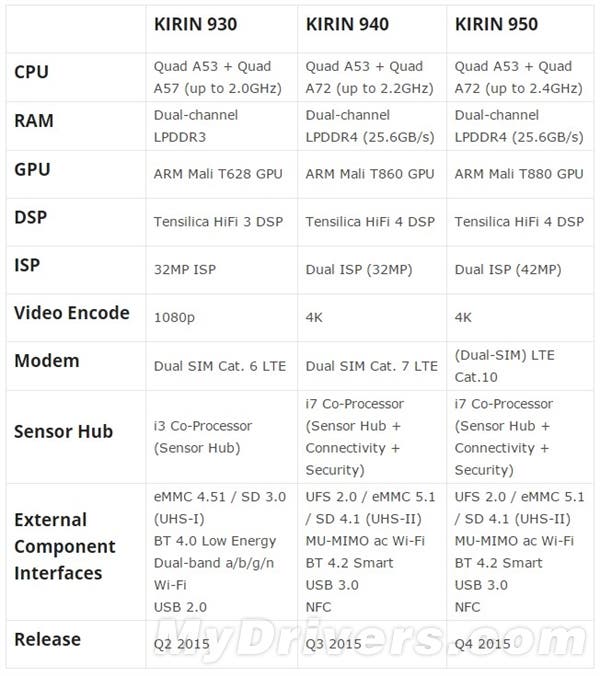 Previous Open Thread: What will be the biggest game change in smartphones for 2015?

Next iOcean show off Android 5.0 Lollipop update for the iOcean X8 Mini