With the launch of the Meizu m1 note and MX4 only a few months away the big question on many people’s lips is “why is there an update launching so soon?” the reason could be a failed legal battle against ZTE’s Nubia!

Physical home buttons on Meizu phones are not a new feature. The Meizu M8, M9 and the MX all had varying styles of physical home button, only making way for a capacitive ‘halo’ design in more recent Meizu models.

Of the current range the Meizu MX3, MX4, m1 note and m1 all feature the halo home button, and this might be the reason we are seeing new Meizu phones launch so early on in the life cycle!

According to Chinese media reports, ZTE’s Nubia brand has taken legal action against Meizu suing the Zhuhai based phone maker for patent infringements. The patents (20,123,048,192.3, and 200820116764.7) refer to the appearance of the Nubia Z5 and in particular the ring capacitive home button arrangement. 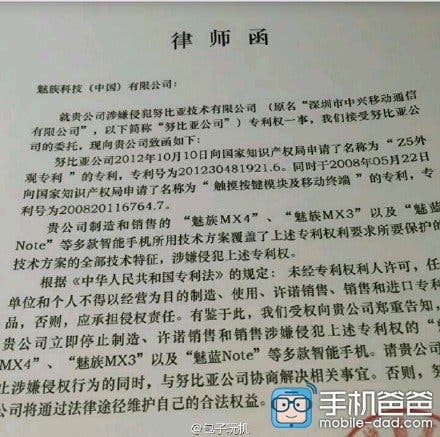 The letter above is reportedly from lawyers dealing with the battle of the two companies stating the case and listing the Meizu MX4 and MX3 as two of the phones which infringe on Nubia’s patents.

So have Meizu been forced to launch new versions of their phones due to legal issues by ZTE? And didn’t Meizu launch with a halo style home button before Nubia with the launch of the Meizu MX2 back in 2012?

Meizu have been quiet about the news at this time. What do you make of this news?

Next The Battery Monster Bluboo X550 in a new video!