The Ulefone Be Pro was the phone-makers entry into the 64-bit world and also the device which made them popular in both positive and negative ways. Now one of the biggest flaws this handset suffered from was the bad screen to body ratio which made the 5.5-incher unnecessarily large. It didn’t take long for “Ulefans” to demand a smaller version of the Be Pro, and Ulefone indeed delivered – or at least tried to do so.

The result is the Ulefone Be Pure, which does look almost the same as the Ulefone Be Pro, yet comes with a significantly smaller 5-inch screen. Unfortunately the Be Pure isn’t quite the device anyone expected, since apart from the design it has nothing in common with the Be Pro. We really don’t get why, but Ulefone went for specs no one wants to see in a phone in 2015. It comes with a MT6592M 32-bit 8-core processor clocked at 1.4GHz, only 1GB of RAM, 8GB of memory and a small 2,000mAh battery. With the handset not even offering LTE support, can this be anything good at a seemingly way to high price-tag of $130? Let’s figure it out!

The Ulefone Be Pure is delivered in the very same packaging as the Be Pro, just a lot smaller. It’s a rather simplistic white cardboard box with one Ulefone logo on its top and a small sticker with the devices specs on the rear. Inside, Ulefone packs a wall charger, USB cable, multi-language security notes and one screen protector. 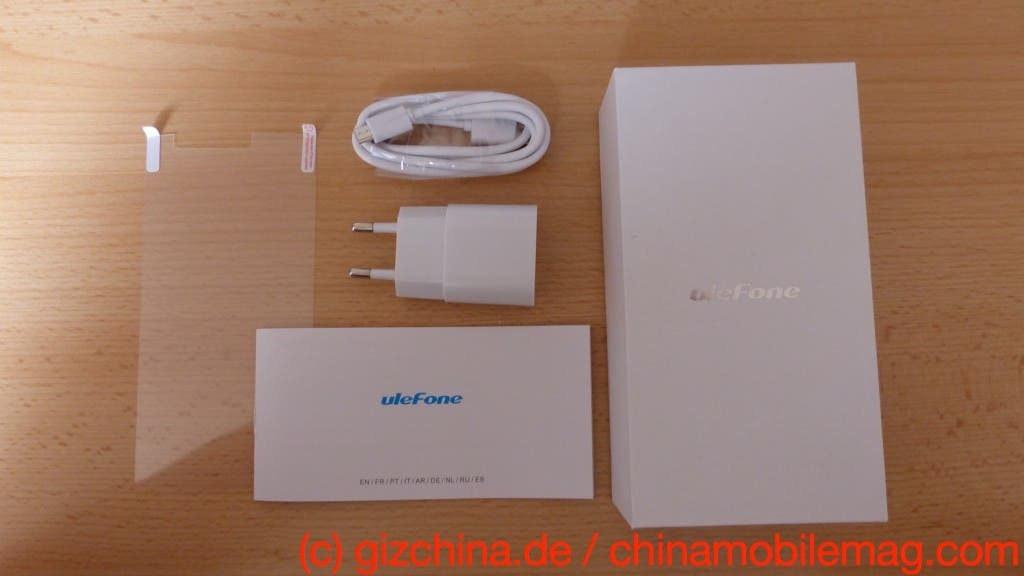 The device itself does look almost the same as the Ulefone Be Pro, just a lot smaller at 144 x 72.5 x 10mm. The biggest differences are the missing status LED, backlit touch buttons and the back cover which now features a rough texture but also feels cheaper. The rest of the design remains the same, and that sadly includes a big downside as well: The buttons still don’t offer enough resistance, meaning you will press them accidentally all the time. Besides this the build quality isn’t too bad, but definitely nothing you would call “amazing”.

Now 720p at 5-inches isn’t bad at all and comparable to 1080p at 5.5-inches – at least that applies if the panel is a quality one. Sadly, Ulefone apparently tried to save money here, which we don’t quite understand since the specs aren’t all that good at a price tag of $130. You would think they could at least offer a JDI or LG panel with the savings they made on the cheap spec. In the end, it’s just a mediocre IPS OGS display with washed-out colors, bad contrast and not enough brightness to fight sunlight. Together with a cheap and laggy digitizer it is simply auful.

If you already used devices with the MT6592M, you will confirm that this chipset is a bit outdated and struggles playing current games with a proper frame-rate, but it is enough for everydays apps, internet surfing, playing videos and other ‘basic’ task. Sadly, Ulefone made two mistakes with the Be Pure.

The first is the low amount of RAM. Let’s face it: 1GB is not enough for multi-tasking, period. Next mistake: The Android ROM. We don’t know what Ulefone did, but it simply isn’t running smoothly. Animations lag and the system gets stuck very frequently for a few seconds, even if just a single application runs at a time. There has been one OTA update already, but that hasn’t improved matters.

Now after all that bad news it is time for something more positive, and that (surprisingly) is audio quality. Ulefone have built an amazing speaker into the Be Pure. Considering the fact that the Ulefone Be Pro’s speaker didn’t perform too well, this came as a big surprise. It’s loud, very balanced and offers (for a phone) heavy bass playback. It really comes close to the Oppo Find 7 or OnePlus One, which you probably know both sound amazing. Please Ulefone, stick to that speaker supplier for future devices!

Regarding the headphone jack we have no complaints in place as well. It sounds good enough to drive quality headphones, and doesn’t have the plug incompatibility issues the Be Pro suffered from. Phone calls don’t sound too bad either with both the receiver and the mic doing a good job.

Now this is the biggest flaw of the Ulefone Be Pure. Receiving mobile networks is one of the basic tasks any phone needs to be capable off. Sadly, the Ulefone Be Pure struggles a lot with this. At least with our review sample it was near to impossible connecting to 3G networks and also the GSM reception quality was below average. Yep, we did take it apart to check if all antennas are connected properly, but with no result unfortunately. It doesn’t stop there though since the very same problems continues with Wi-Fi, too. Just one wall in between the phone and the router result in one signal-bar less. Covering the antenna with one hand will let the signal drop to one bar. GPS isn’t much better. With a maximum accuracy of just 12 meters!

The Ulefone Be Pure comes with a 13 mega pixel rear shooter and 5 mega pixel selfie-taker which apparently both do not use interpolation. Now we’ve seen a few reviewers claim the camera to be outstanding, which we can’t confirm. We don’t deny that it’s a decent snapshot camera and does a good job taking HDR shots, but it doesn’t even come close to the Xiaomi Redmi 2 or Siswoo C50 for example, which both are priced about the same yet offer up-to-date specs. Something we dislike the most about the Ulefone Be Pure camera is the fake dual-LED flash. It really looks like one at the first look, but on closer inspection you notice there is just one LED, and it isn’t even bright enough to be called a flash.

To be honest with you, we didn’t expect too much from the 2,000mAh cell inside this handset, yet in the end it came out to be not too bad. A fully charged cell delivers between 5 to 7 hours of screen-on time, depending on usage and screen brightness which translates to about a day of battery life, sometimes a bit more. It seems like Ulefone did well with the optimization part of both hard- and software plus, the cell offers a real 2,000mAh. There’s a big flaw though: Charging takes up to 4 hours! But in the end, if the battery lasts a full day you can charge at night, and while sleeping you won’t care, right?

The Ulefone Be Pure is a nice try to create a smaller version of a successful device. While the basic idea behind that is good, Ulefone totally failed making that idea a reality. This device really isn’t anything we’d like to use on a daily basis mostly due to the awful performance and extremely bad reception quality, and you guys will probably feel the same.

Thanks to Coolicool and Ulefone who provided us with the review sample.

Previous UMi to release details of their UMi Iron soon

Next As the U8 finally starts appearing, Oukitel is already working on the U9