A couple of leaked images this morning show the Meizu MX5 along with details of a fast charging technology Meizu are calling mCharge.

With the Meizu MX5 rumoured to be running a Mediatek chipset, and with rumours that the Taiwanese chip maker have bought major shares in the phone maker, it makes perfect sense that Meizu would add more tech from the partner in to their newest phone.

According to these leaked images, the Meizu MX5 will boast a fast charging system that can give the phone 25% power in only 10 minutes and 60% in just 40 minutes. Which sounds a lot like the Mediatek’s Pump Express Plus feature. 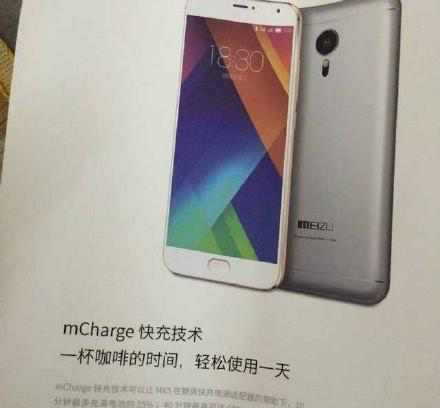 We’ve seen Pump Express Plus on the Bluboo X550 also, and looking at the charge times believe that the Meizu MX5 will have a battery size of around 3100-3300mAh.

In addition to the new charging tech and a Mediatek processor, the alloy bodied MX5 is also believed to have 3GB RAM, 20 mega-pixel main camera, with a Mediatek MT6795T running the show.

Next $65 No.1 Sun S2 smartwatch gets unboxed