With summer here you will want to be getting out in the sun and enjoying some outdoor fun, and what better way to capture the action with one of the new breed Chinese action cameras from smartphone maker Blackview.

GoPro might be the current market leaders in the action camera market, but their higher pricing and lack of included accessories can make their range cost prohibitive to some fans of the outdoors leading them to search for alternate models.

Chinese companies have been quick to oblige with Xiaomi, SJCAM and now Blackview offering action cameras, with similar GoPro designs and even a certain level of compatibility with existing GoPro accessories. 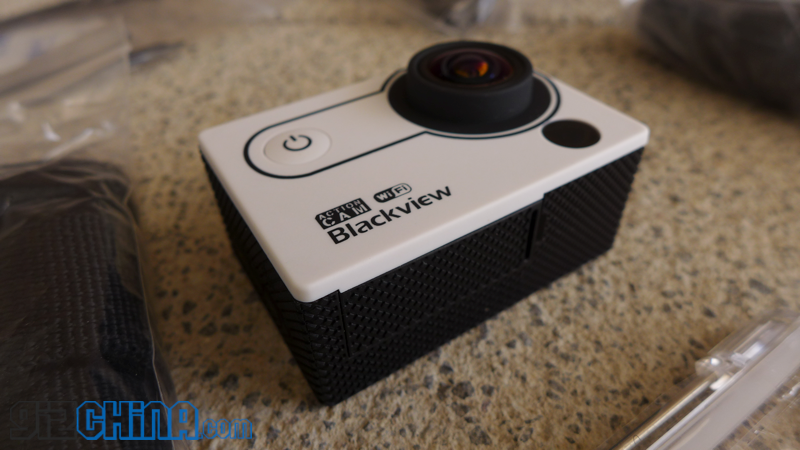 I received the Blackview Hero 1 recently which is one of 2 cameras offered by the smartphone come camera maker. The Hero 1 differs from the Hero 2 in that it offers WIFI support for control with a application on your phone, the Hero 2 comes with a dedicated wrist mounted remote.

Costing just $129.99, the Blackview Hero 1 is seriously cheaper than even the most basic GoPro, yet it offers a high level of features and comes with a monstrous amount of accessories and different mounting components. In fact if you were to price up the included accessories based on official GoPro alternatives you would be looking at over $100 of included parts with the camera! That’s value for money. 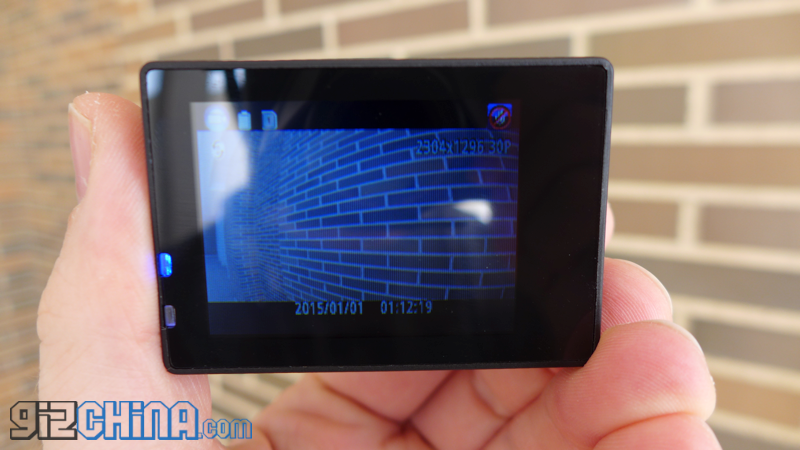 As for the camera itself well the features continue to impress. First up the rear of the camera is actually a built in LCD display. It isn’t the brightest and you will need to shade it with your hand to see in very bright sunlight, but just for ensuring your camera is pointing in the right direction it is more than enough. The screen is also used show and indicate various settings of the camera e.g the resolution, turning on WIFI etc.

An AMB A7LS75 chipset runs the simple menu system, and offers support for AV Out, HDMI Out, WIFI and there is space for a 64GB SD card. 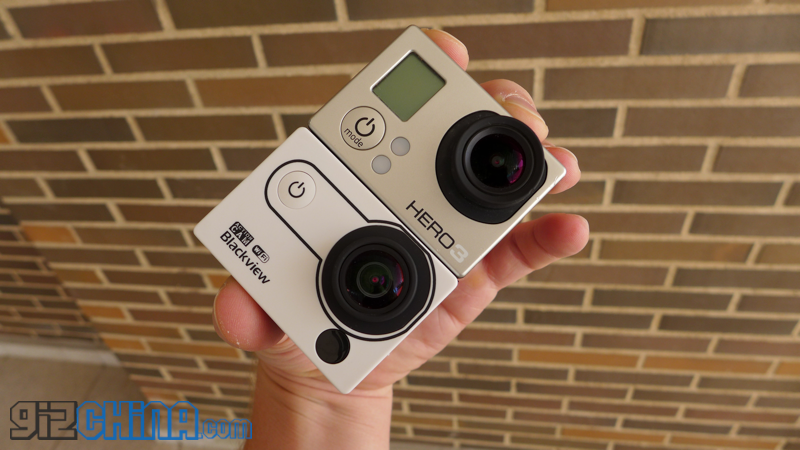 The design of the Hero 1 is similar, but not the same, as a SJCAM 4000. It is also similar to a GoPro in that it is a compact (5.9 x 4.1 x 2.9 cm) sports camera, but with more physical buttons and a built in display, the Blackview Hero 1 won’t fit in a GoPro case so it is just as well a waterproof housing comes in the box.

Like GoPr0, Blackview supply the waterproof case with an optional door with gaps in. These gaps mean that the sound quality will be better, but mean the camera cannot be used in wet or underwater conditions. Just remember it is the case that is waterproof and not the camera. 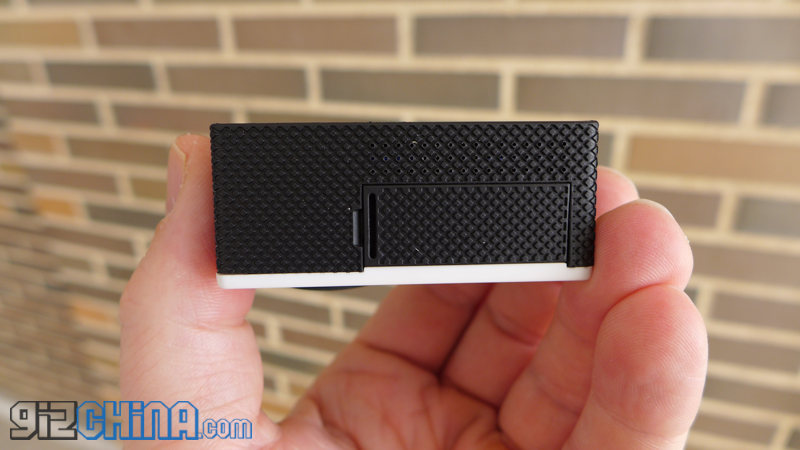 Our version of the Hero 1 has a textured main body (good for holding with gloves) with a white face. The front of the camera is where that 170 degree lens is, and a power button. At the top there is an ‘ok’ button for selecting functions and for starting the record features, plus notification LED. The left side has USB, micro SD card and HDMI out, while the right has up and down buttons.

The base is where the 1050mAh battery lives and the rear where the 2-inch, 240x 960 display and more notification LED’s are located. 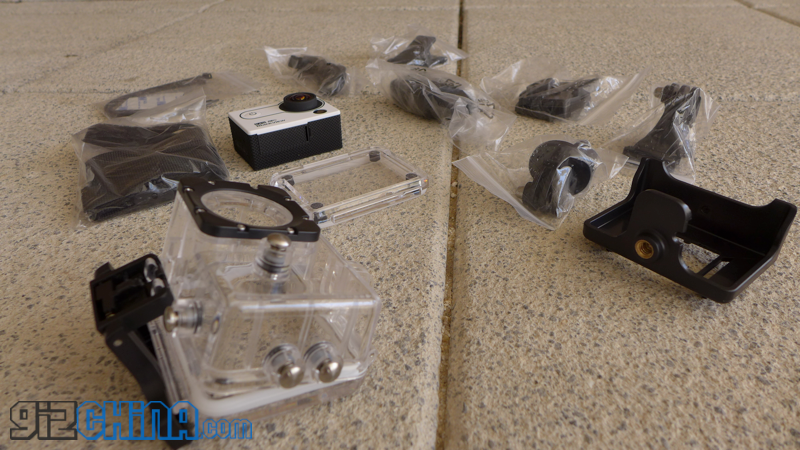 As already mentioned there are a ton of included accessories from sticky pads, to straps, helmet mounts and extensions. The foot of the connectors is similar in design to GoPro designs, but not all the accessories will work well with GoPro parts. For example the Blackview case cannot be used with a GoPro foot (due to size restraints), but the Blackview foot will fit in to a GoPro style mount if you already have one on your helmet.

If there is one complaint it has to be the system that runs on the Hero 1. If you are use to the simply controls of a GoPro the over complex menu system of the Blackview is going to irritate you. It’s not a simple system to pick up, and it appears that there is no option to switch from Video to stills without using the Android application to control the camera over wifi.

In fact I wouldn’t even bother trying to navigate the Blackview Hero 1 on it’s 2 inch display using the physical buttons. Instead just download the APK and do it all off your phone, it is much easier. The downside to this though is the WIFI and rear display really eat in to battery life and you WILL need a spare if you intend on spending the day at the local bike park. 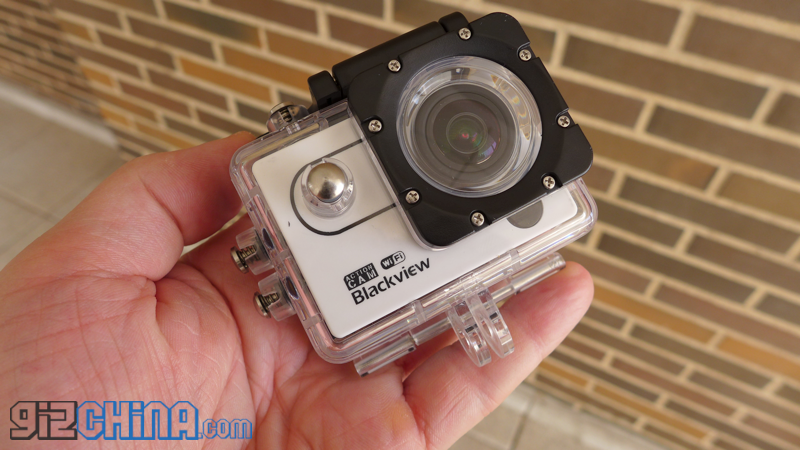 The Hero 1 is a good value camera with impressive 16 mega-pixel camera and a huge number of accessories. It is certainly worth looking at if you only intend to use the camera casually. Loose buttons, in the body, the power sapping screen and irritating menu system are what really spoil the camera for us and stop it from being a true GoPro alternative though, so if you are planning to take part in the next RedBull Rampage you will probably want to stick with the GoPro.

A full review is in the works with video samples so please look out for this in the coming days.

Next Chuwi Vi10 Review: Dual-boot tablet with a winning formula