India is on the rise, as many manufacturers turn to the emerging market as a way to increase smartphone sales that are cooling off in other parts of the world. Xiaomi, as a manufacturer that looks to expand its popularity, is no different. The company is celebrating its one-year anniversary in India with the announcement of an updated Mi 4i smartphone in the country.

The new Mi 4i, as opposed to the old one, provides double the storage as compared to the device released in April of this year. That means that new buyers of the updated Mi 4i will receive 32GB of storage as opposed to the 16GB of storage present on the three-month model. When you consider the storage space occupied by operating systems today, 16GB of storage is still too minimal for most consumers. 32GB of storage provides more than enough space for the typical consumer. Of course, app-hungry customers and diehard power users will opt for more, but 32GB is enough to keep the criticisms at bay, it seems. 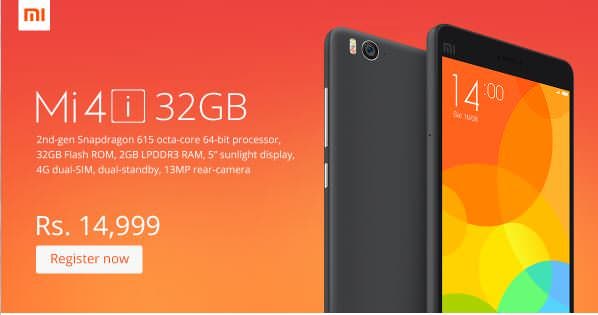 Xiaomi still refuses to implement SD card slots into the device, but the company has legitimate reasons for so doing. Chief among the reasons to exclude an SD card slot, as stated by Hugo Barra, pertain to the slower performance of SD card devices, as opposed to their non-SD card slot rivals. Samsung’s recent decision to exclude microSD card slots in its Galaxy S6 and S6 edge devices had everything to do with faster flash storage (UFS 2.0) and faster device performance overall. Considering that its devices are topping the AnTuTu benchmark scores at the moment, the logic is justified.

In addition to the 32GB Mi 4i release, Xiaomi is throwing a discount party at Mi.com for the next week, with buyers of the 16GB Mi 4i getting a coupon for Rs. 500. The latest special offer from the company concerns a new smartphone case as a bundle deal for buyers of the Redmi 2 or Mi 4.

Next Xiaomi Mi Note arrives in Malaysia, to go on sale July 28th