The phone that was on many of our lips has finally launched, so has the wait for the OnePlus 2 been worth it? Learn the full specs for the new flagship killer here.

With leaked images and video, and OnePlus releasing partial specifications for their latest device ahead of the VR launch earlier, there really wasn’t much left for OnePlus fans to wait for and learn.

Still there were some surprising additions and omissions of the OnePlus 2 that we learnt during the launch.

In standard form the OnePlus 2 will ship with a Sandstone Black rear panel. There won’t be a white baby skin version available off the shelf, but wooden style swap covers will finally be making their way on to the phone. I have to say that the odd styling doesn’t look quite as bad when those wooden covers are attached in place too.

Dimensions of the OnePlus 2 are smaller than the original OPO at 151.8 x 74.9 x 9.85mm. With a weight of 175g and a thickness of 9.85mm the OPT isn’t the lightest nor thinnest phone on the market, but that recoverable rear cover does add to the thickness as does the 3300mAh battery. Unfortunately the battery is non user replaceable and, although quite a thick phone, OnePlus didn’t manage to find space of fast charging, wireless charging, NFC or a SD card slot. 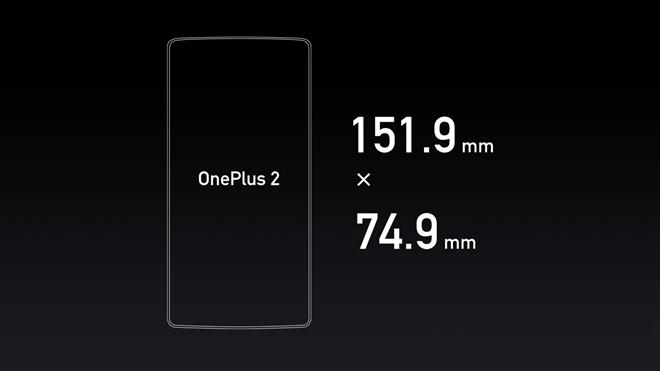 Moving on the display on the OnePlus 2 is a Corning Gorilla Glass 5.5-inch panel running a FHD resolution of 1920 x 1080. A good choice in our opinion. Above the display is a 5 mega-pixel distortion free camera and below a physical home button with in-built fingerprint scanner.

Dual speakers are found in the base of the phone as is USB Type C, while the rear is home to a 13 mega-pixel main camera. The rear camera boast OIS, dual LED flash and 6 lenses for reduced distortion and color aberration. The rear camera supports 4K video and 720p slow motion at 120fps. The 13 megapixel shooter also boast an F2.0 aperture and super fast laser autofocus.

Under the hood there are very few shocks. Qualcomm have supplied a 64bit Snapdragon 810 chipset running at an under clocked 1.8Ghz and Adreno 430 GPU. There is 3-4GB RAM, options for either 64GB or 16GB memory, and dual SIM.

Supported bands for the OnePlus 2 (international model) are;

As you are all probably aware the OnePlus 2 comes with OnePlus’s own Android ROM named OxygenOS. The system is based on Android 5.1.1 and looks clean and stylish, but not to far removed from a standard Android install. 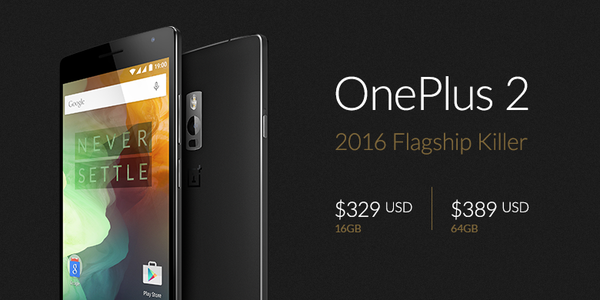 You are all also probably be aware that to buy the OnePlus 2 you are going to need an invite. The first invites will begin on the 11th August and phones will cost $389 for the 4GB RAM 64GB memory version. A $329 3GB RAM 16GB memory model will be also launched but at a later date.

So that’s the OnePlus 2. Now that it is official what do you think of the phone? Is it everything you hoped? Are you upset for the lack of NFC, SD and fast charging? Will you buy one? Let us know in the comments below.

Next Poll: Now the OnePlus 2 has launched have you changed your mind?