It’s been a while since Elephone have been on a roll, which is something they’re well known for. That might soon change with the launch of the upcoming P9000 though, a phone that just got its specs leaked thanks to a store listing.

The listing mentions that the P9000 will have the deca-core MediaTek MT6797, a chipset that also seems to be built in to the upcoming Meizu phone. Nonetheless, there’s some other info that leaked along with that, so lets take a look. 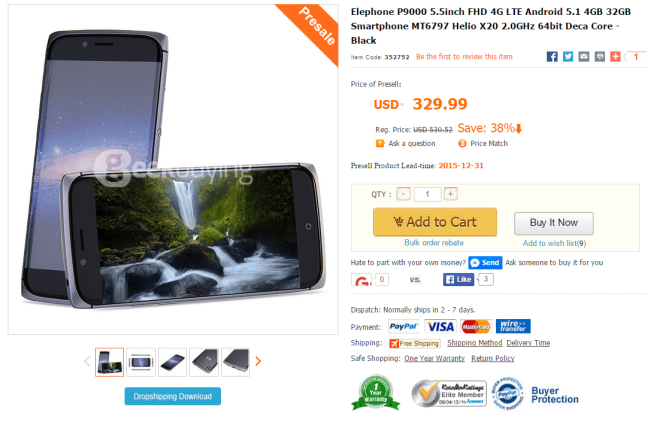 First and foremost, the pricing; the P9000 has been listed for US$330 which would make it the most expensive Elephone from the P series, unless of course the pricing gets changed. Furthermore, the listing suggests that the P9000 will have a 5.5-inch FHD display, 4GB of RAM and 32GB of on-board storage.

Cameras will be a 16 mega-pixel sensor on the rear and another 13 mega-pixel on the front. Needless to say, there’ll also be a fingerprint sensor but the renders aren’t really convincing as far as telling us the location of the sensor goes.

The Acer Predator 6 is the only phone so far known to feature the deca-core MT6797, could the P9000 be the second?