Lenovo is all set to officially take the wraps off of the Vibe Shot in India next week.

The phone will be launched the same day Xiaomi announces its Mi 4c, i.e., on Tuesday, 22nd September. The Vibe Shot, if you aren’t aware, is a photography-first phone with a neat design around the 16 mega-pixel OIS sensor.

91mobile reports that Lenovo might not have a traditional launch event for the phone, but instead stream a live feed on YouTube. 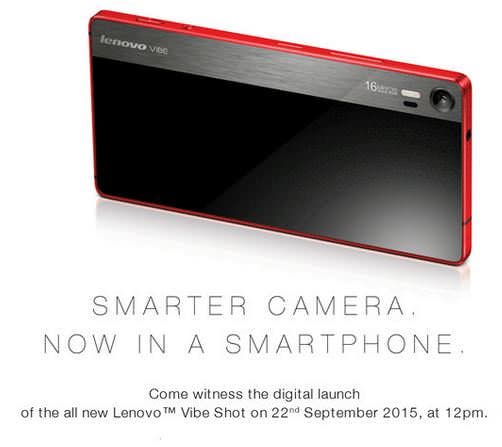 If not the camera, the specifications of the Vibe Shot will remind you that the phone is strictly aiming at the shutterbugs; it comes with an octa-core Snapdragon 615 SoC, which is fairly mid-range. Along with that, the Vibe Shot packs 3GB of RAM (not very mid-range), 32GB of ROM, a 2900mAh battery and a 5-inch 1920 x 1080p display.

There’s Gorilla Glass on the front and back of the phone to add to the visual appeal and the ‘feel’, and while at it, make the sides a little scratch-proof. Lenovo hasn’t announced the pricing yet, but considering what it sells for elsewhere in the world, buyers in India will want to keep 23,000 INR ready if they want to purchase one.

Next Xiaomi Mi 4c confirmed to have USB Type-C, Snapdragon 808