Read our Uhans U100 Review, a phone designed to copy the looks of a luxury smartphone at the cost of a budget phone.

Uhans are a phone maker that are not really too concerned with the hardware of a phone and like to take a little more time building something that is different from the norm. Take the Uhans U100 for example, it is a phone that costs just $100 but it’s main selling point is a leather cowhide rear panel! In comparison to rivals this is a strange move by Uhans but they already have a niche following.

The design of the Uhans U100 is a real talking point, and splits opinion right down the middle. It’s a love or hate design, and Uhans know it. They realise that not everyone is going to fall in love with the U100, and this actually works in favour of Uhans. With such outlandish designs they have already started to build a cult following of design conscious smartphone users, a niche that really only they (and a few phones from Doogee) can really fill.

The fact that Uhans also realise they are a niche brand is refreshing to me too. All so often we see phone makers build a phone with the opinion “If its cheap enough people will buy it” as we have seen time and time again this is not true, and Uhans understand that. Knowing they see slow growth and a small niche market yet they continue to make phones, gives me hope that they are not a fly by night phone maker.

So after my glowing opinion of Uhans as a brand I obviously love the design of the phone right? Actually no I don’t. While I don’t see it as ugly, it isn’t a design I would be happy to show off to my friends or family, and it’s not a design that appeals to as a customer. 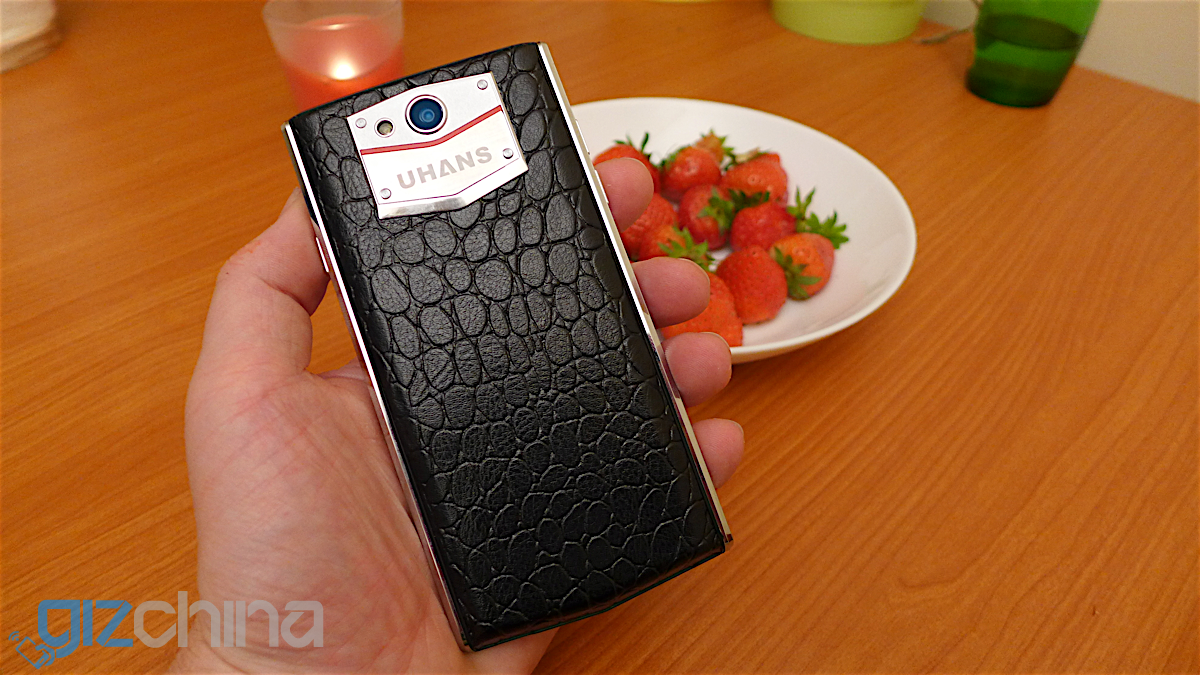 But not everyone shares my opinion and there are customers out there looking more style and design over the latest specs.

It’s the cowhide leather rear of the phone that really grabs your attention first, that and the big shiny “Uhans” plaque around the camera and flash. It’s not a subtle phone in any understanding of the word. The leather rear is highlighted further still with large chromed side strips that look like metal but feel like a plastic with metal look coating. The smooth curve on the rear of the phone is also the polar opposite to the harsh angles and edges on the front. 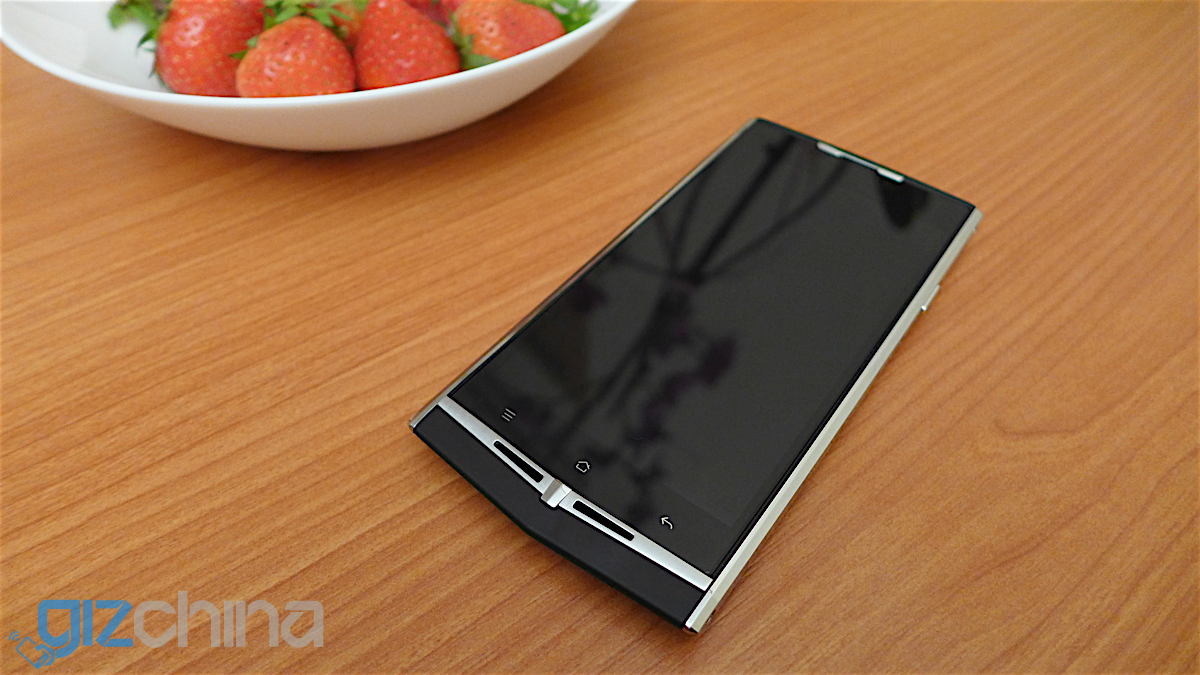 The most obvious comparison people come to is that the Uhans U100 looks like a Vertu or similar phone, but it also looks like a really upmarket mens electric shaver (from the 90s) too. Uhans have made the U100 a design that will really appeal to the same people who which a Channel bag looks good i.e gaudy metal and over the top leather. If that’s your thing the you will love the U100.

For such a visually aggressive phone, the hardware is quite tame. There are no cutting edge features, no fingerprint scanners, no eye scanners, everything is quite normal for a phone that costs $100. 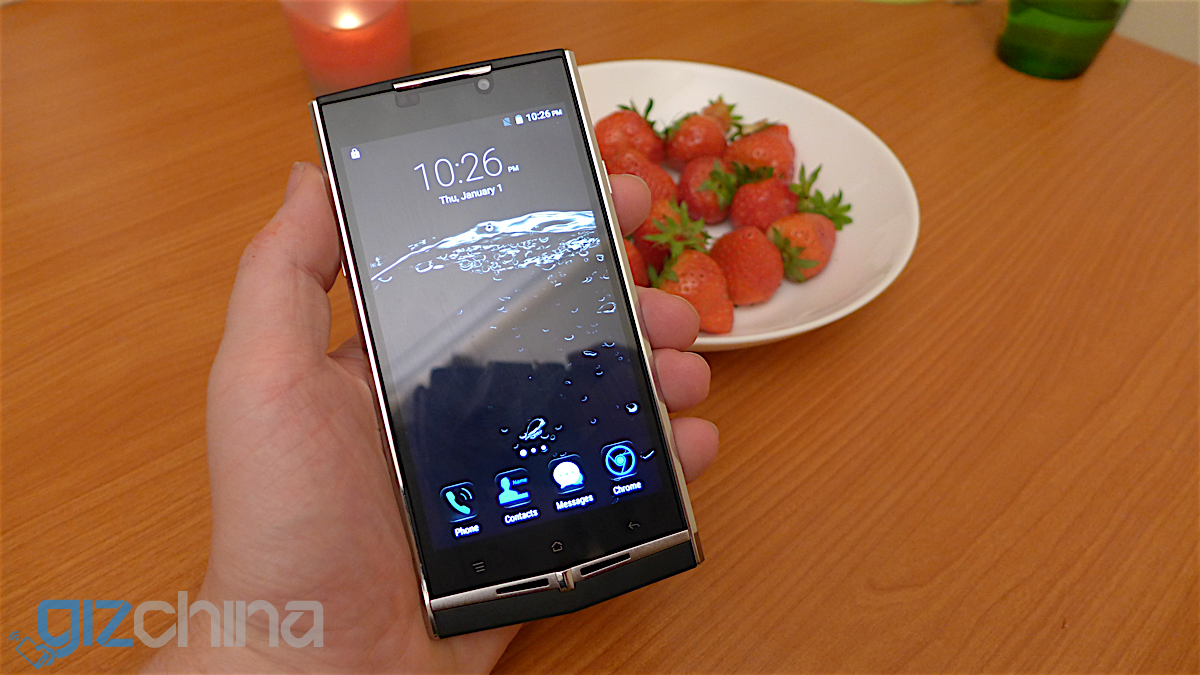 Up front the display is a 4.7-inch HD display with capacitive buttons along the bottom chin. Above the display is a 2 mega-pixel OV camera, and an LED notification light. Speakers are located on the front but limited to the metal ‘v’ section below the buttons.

Along the right side of the phone is a power button, and a volume control is located on the left. The base is left blank, and the top has a USB plug and 3.5mm headphone jack. 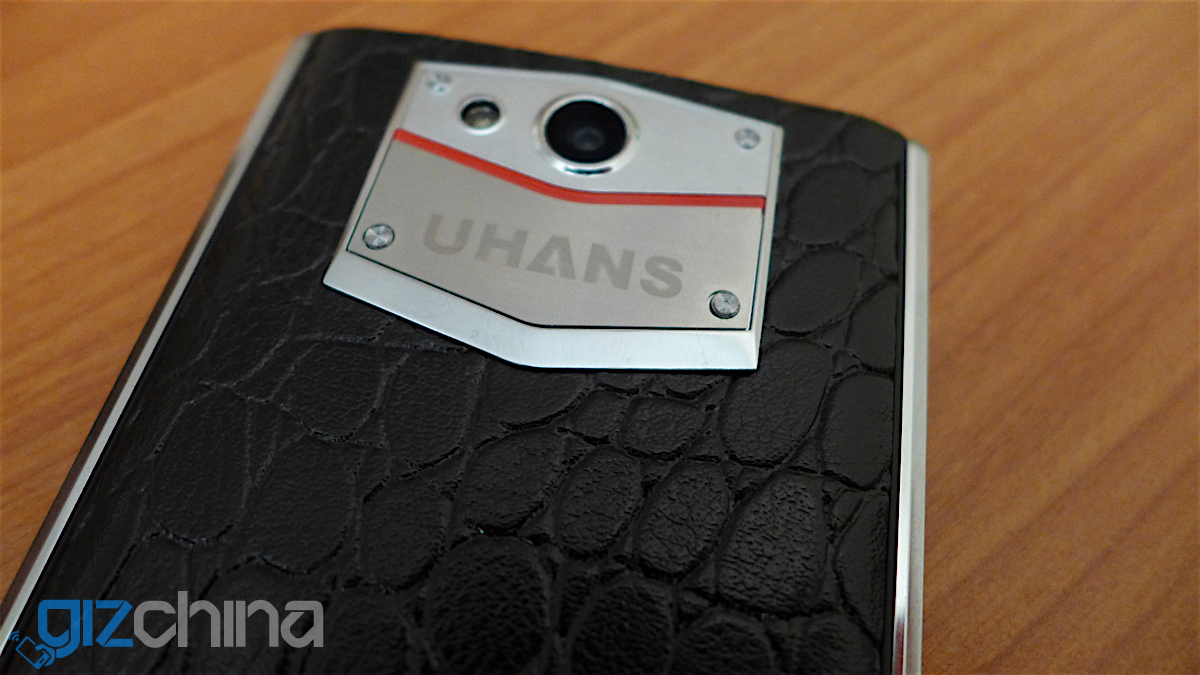 An 8 mega-pixel and single LED flash take up their position on the rear. You will have noticed there are no trays for the SIM or SD cards, this is because the leather panel is removable giving access to the dual SIM cards, micro SD card slot and BAK manufactured 2200mAh battery.

As style is the main selling feature of the Uhans U100 the hardware is simple stuff, and that’s fine. The Mediatek chipset is the MT6735P, this version of the quad-core SoC runs at only 1.0Ghz, which along with the smaller display, means the 2200mAh battery hasn’t much to worry about. The chipset has built in FDD-LTE support for bands 1/3/7/8 and 20.

Uhans have opted the RAM to 2GB LPDDR3, while the internal memory is 16GB, 11.57GB is available space out of the box, and an SD slot will take up to 32GB cards. As mentioned above the display is a 4.7-inch HD panel. It’s quite a basic screen not featuring OGS, and the blacks are more a dark grey, this is obviously one area that Uhans have saved significant money.

It’s hard to know what to write about that hasn’t already been said about this type of specifications set up. If you are a power user then you won’t even be looking at this phone, but for regular phone users who only require the basics then performance is spirited enough.

During my time with the phone I found WIFI and LTE signal strength to be fine, but the receiver speaker and external front speakers are a little tinny.

The 2200mAh battery is small compared to the thickness of the device, and rival phones, but for the specs its fine and you can easily get through a full day of normal smartphone usage.

Camera specs on various reseller sites say that the rear camera is a 13 mega-pixel while the front is 5 mega-pixels. This isn’t quite true and even the official Uhans website lists the actual camera specs as 8 mega-pixel rear and 2 mega-pixel front. Those inflated camera specs come from the software features that allow the phone to create higher resolution photos. This is a common feature on a lot of Android smartphones.

The speed of the camera can be described as slow. The auto focus is slow, and the time of capture and saving the image is slow. Even the shutter noise sounds slow. Taking photos of still life is all you can expect to achieve with the Uhans U100 and only when there is sufficient light. 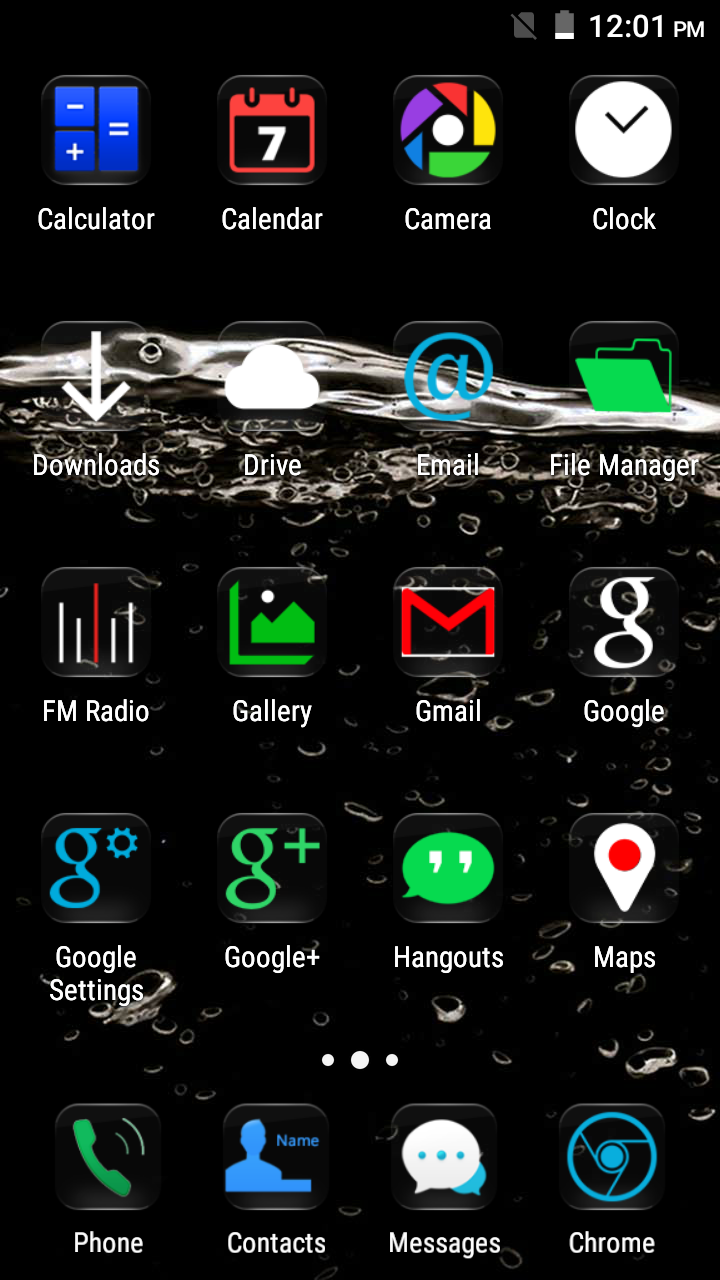 This being a phone designed for style first, it is not surprising that the launcher and icons have been switched to what Uhans consider to be stylish. App icons have a simple neon look to them and with certain backgrounds this can make it difficult to see what the icons are actually showing.

The only changes seem to be in the launcher and icons, and there is no app draw, and if you didn’t like them you can always download something else. Once inside the settings then everything looks like standard Android 5.1.

As already pointed out, Uhans are not designing phones to please the masses, they are building phones for people who want style over function and that is what they have achieved with the U100. 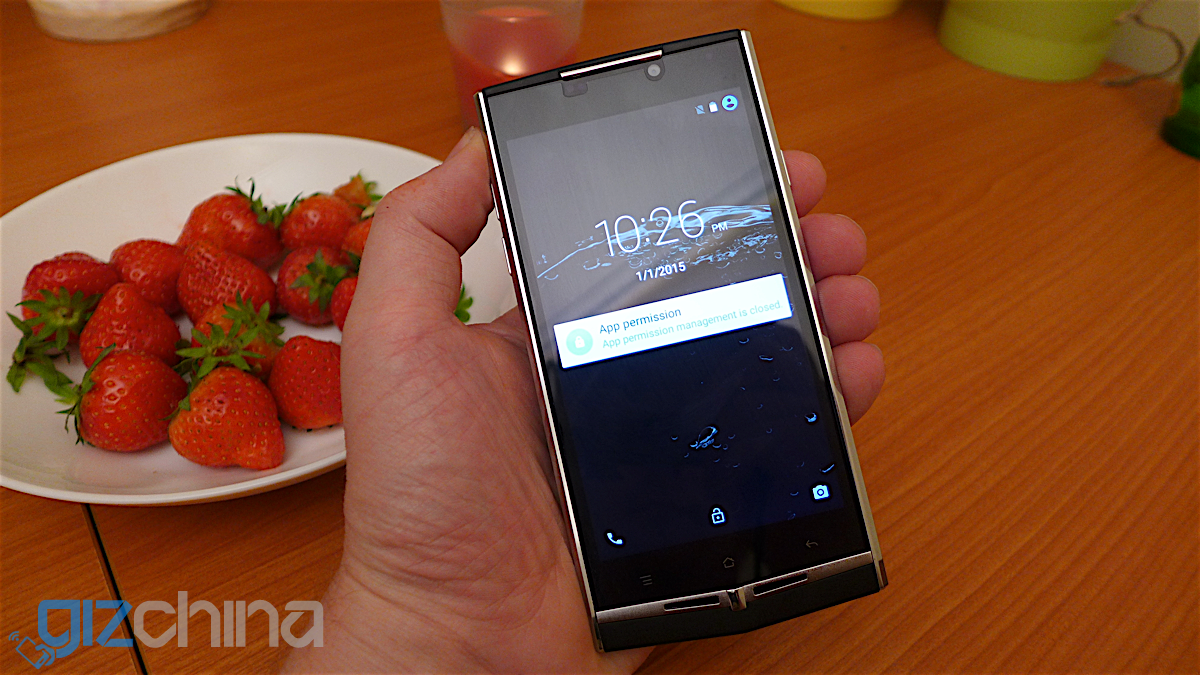 Those same people who like expensive leather bags and purses, but can’t afford genuine Channel, Gucci etc, will be drawn to the Vertu styling of the Uhans U100. It does everything you want it to do, but not quite to the same standard as other $100 phones and not as the same speed either.

Buy this phone for the looks only, not the performance or features.