Xiaomi’s sudden love for large batteries is comes as a bit of a surprise.

After shipping the metal-clad 5.5-inch Redmi Note 3 with a 4000mAh battery, the company is set to put an even larger one in the upcoming Redmi 3.

The news comes from a teaser sent by the company which mentions a 4100mAh battery on the Redmi 3. This is indeed a bit of a surprise because the Redmi Note 3 which launched only a few weeks back has a larger screen and yet a smaller battery. 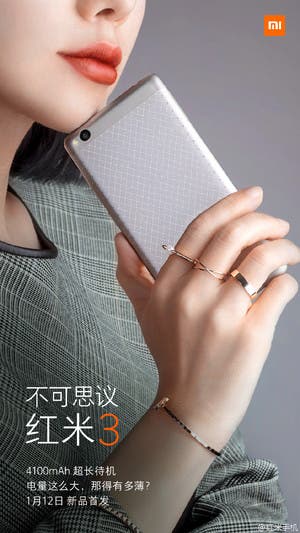 As for the other specifications of the Redmi 3 (which by the way, is due for a launch 12th January), word is that it’ll have an octa-core processor (most likely the Snapdragon 616), a 5-inch 720p display, a 13 mega-pixel rear camera, a 5 mega-pixel front facing camera.

Interestingly, Xiaomi claim to be using a new technology for the battery which allows them to cram double the density in the same footprint. This is what also fuels the rumours of the Redmi 3’s thickness being a mere 8.5mm.

What the Redmi 3 is also going to be is an all-metal phone akin to the Redmi Note 3. So if 5.5-inch phones aren’t your thing, you might soon have another option to choose from.