Xiaomi have pulled a fast one on us all and actually officially announced full specifications and pricing for the Xiaomi Redmi 3 a day earlier than first thought with sales starting tomorrow.

The dates on the Xiaomi Redmi 3 teasers said the 12th, but the actual official announcement for the new budget Xiaomi took place today (the 11th) in a surprise move which marks a new strategy for Xiaomi on how they handle new phone releases.

This time around the rear of the all metal, 5-incher was officially shown off last week and specs of the phone had been slowly trickling out on Xiaomi’s social media outlets with full hardware parameters finally becoming official earlier today. 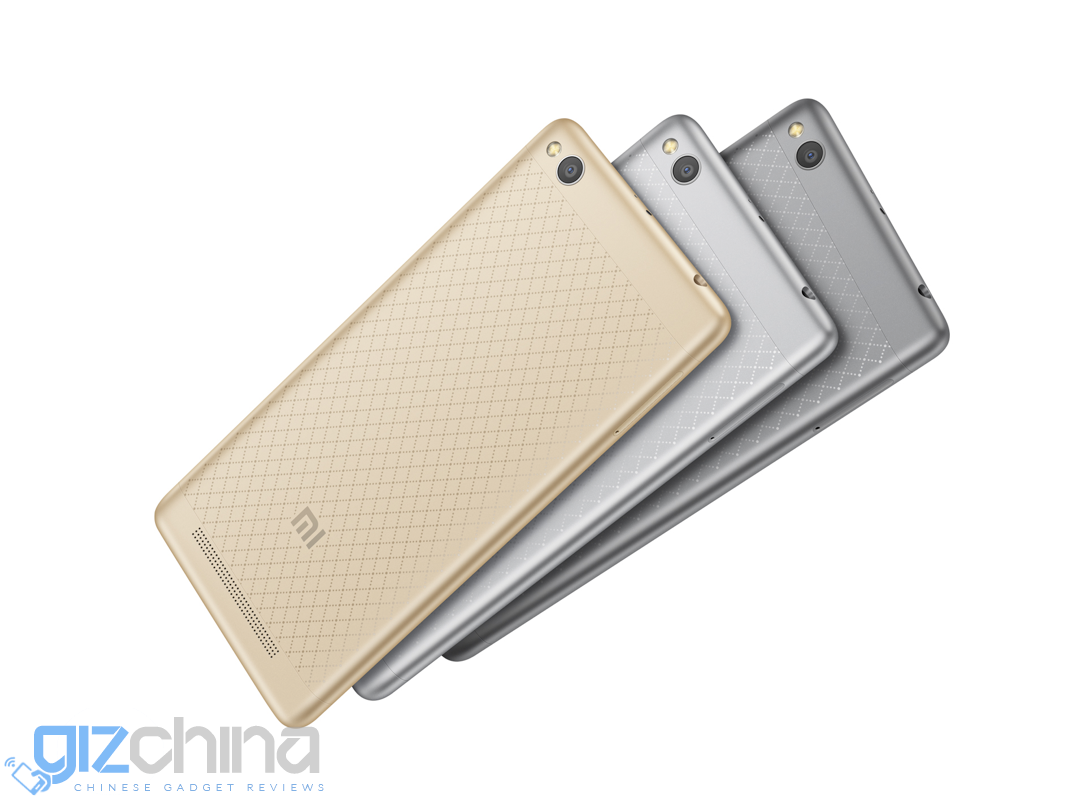 If you had been keeping up to date with all the leaks so far then the Xiaomi Redmi 3 announcement today isn’t going to hold many surprises and only confirms our earlier guesses and reports.

The 3rd generation Redmi is the first all metal version and features a new lattice design on the back made up of 4166 stars etched together to give a diamond arrangement effect. The new metal body measures only 8.5mm thick, and will come in gold, silver or grey.

As we saw in the Redmi Note 3, the Xiaomi 3 gets a new large battery in this case a huge 4100mAh unit with 5V/2A fast charging extending talk time by as much as 80%. Optimizations to MIUI 7 mean that the user can get as much as 25% more usage from the Redmi 3 on a single charge compared to the Redmi 2.

The metal bodied phone can still support dual SIM cards with all networks in Chinese networks supported, but unlike the Redmi 2, only a single SIM card can be used if an SD card is desired. With only 16GB available internally we are sure many customers will opt for running a SD card (up to 128GBs supported).

As our reports from yesterday suggested, the Xiaomi Redmi 3 has a 13 mega-pixel camera with PDAF fast autofocus (like the Redmi Note 2 and 3) with F2.0 aperture. This is a huge update over previous Redmi rear cameras. The front camera is a 5 mega-pixel F2.2 camera.

Other specifications include a 5-inch 1280 x 720 display, 2GB RAM, and an Octa-core Qualcomm Snapdragon 616 processor. The use of a Qualcomm chip rather than Mediatek leads us to believe the Redmi 3 will also launch in India and other official Xiaomi launch territories later in the year.

Last but not least is the pricing. Once again the Redmi range see’s no price increase despite the huge hardware and build changes! Customers in China will be able to buy the Xiaomi Redmi 3 for 699 Yuan ($106) from the 12th January!

So those are the official Xiaomi Redmi 3 specifications and pricing details. What do you think? Let us know in the comments below!

The Xiaomi Redmi 3 can be pre ordered on Shop.GizChina.Com now.

Previous Xiaomi Mi5 spotted in the wild with home button