This partial roadmap from Mediatek shows us a couple of new processors to look forward to for the coming year.

Starting with Q1 Mediatek are set to release the Helio X20 chipset. This processor is the much anticipated successor to the Helio X10 sporting 10 cores built in to a tri-cluster (full Mediatek Helio X20 details here). The roadmap also lets us know the X20 can handle up to 25 mega-pixel camera’s, 4K video, Cat 6 LTE and 2560 x 1600 displays.

What’s really surprising to see is the Helio P20, and the fact the specs listed here meet the rumoured details we posted last week. 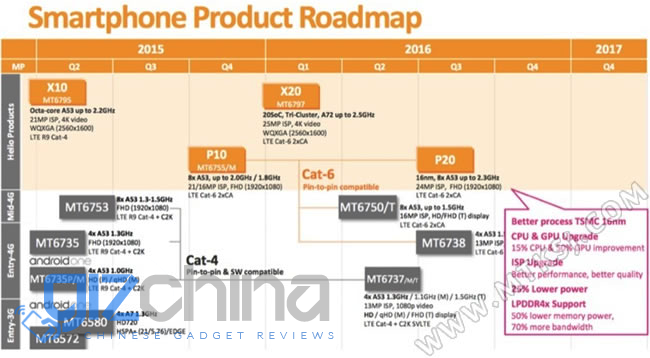 The Mediatek Helio P20 is confirmed to have a 16nm architecture just as we posted last week. the Processor will power up to FHD 1920 x 1080 panels, offer 24 mega-pixel camera support plus Cat 6 LTE.

The roadmap doesn’t detail Q4 of 2016 but we assume this is when we can expect the Mediatek Helio X30 to arrive on the scene.

What are your thoughts on Mediatek’s plans for 2016?

Previous Xiaomi and Meizu phones now available in the U.S