Xiaomi have shown an image of a silicon case for the Xiaomi Mi5 revealing the camera placement of the phone and giving us an idea of the overall size of the phone.

Taking in to account the size of the Xiaomi Mi5 cover in the hand of the model in the image it looks like the new flagship MIUI phone is going to be roughly 5.2-inches. This would tie in with previous rumours and make the new phone slightly larger than the current Mi4 but smaller than the Mi Note.

The image tells us that the silicone case will measure just 0.45mm thick, so just thick enough to add a little protection to the phone, but not thick enough to ruin the compact size and feel of the new phone in the hand.

Take an even closer look to the image and we can just make out the camera location at the top left of the phone. The oval cut out looks to be just right for a single camera and dual LED flash set up, but doesn’t appear big enough for a dual camera design (a feature some Chinese manufacturers will be offering this year). 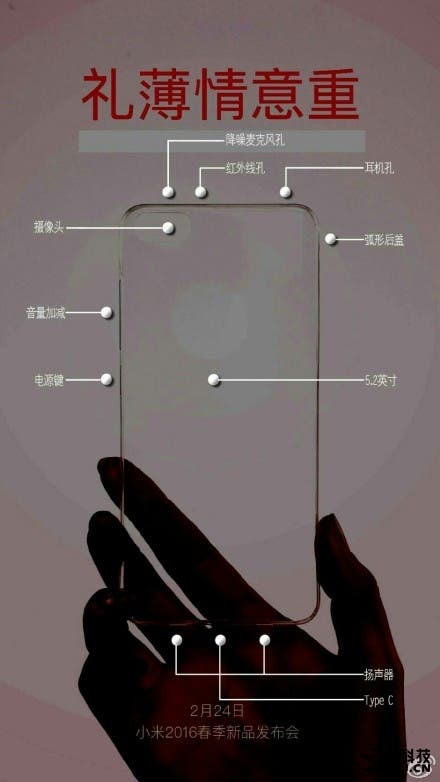 Playing with filters with the image reveals the power and volume button locations on the right of the phone (true to all Xiaomi phones), and there appears to be a circle on the rear which might be where a fingerprint scanner could be located.

There also seems to be 3 cut outs in the bottom of the case for dual speakers and a USB type C.

Xiaomi will launch the Xiaomi Mi5 in China on the 24th but will also have a special media presentation of the new phone during MWC so watch out for that during our MWC reports later this month.

Next How to teardown the Oukitel K6000