Following on from this mornings GFXbench leaks are images that confirm specs of the Vivo Xplay 5. Keep reading for more.

Looking at the most recent GFXbench listings, and these newly leaked Vivo Xplay 5 advertisements, it looks like the Vivo Xplay 5 specs are pretty much confirmed and that includes 4GB RAM and the curved display.

The images posted on Weibo today (which could still be fake) show the Vivo Xplay 5 in pink, gold, silver colour options, with a touch fingerprint scanner on the rear, dual LED flash and rear 16 mega-pixel camera. The design is similar to the current Vivo X6 Plus, but with a screen size of just 5.43-inch the physical size of the phone will be smaller.

Speaking of the display, the images clearly show a curved front panel in the same style as the display on the Samsung S7 Edge, but which less of a curved area. The screen is listed as being a Super AMOLED model with 2K resolution (which matches this mornings benchmarks). 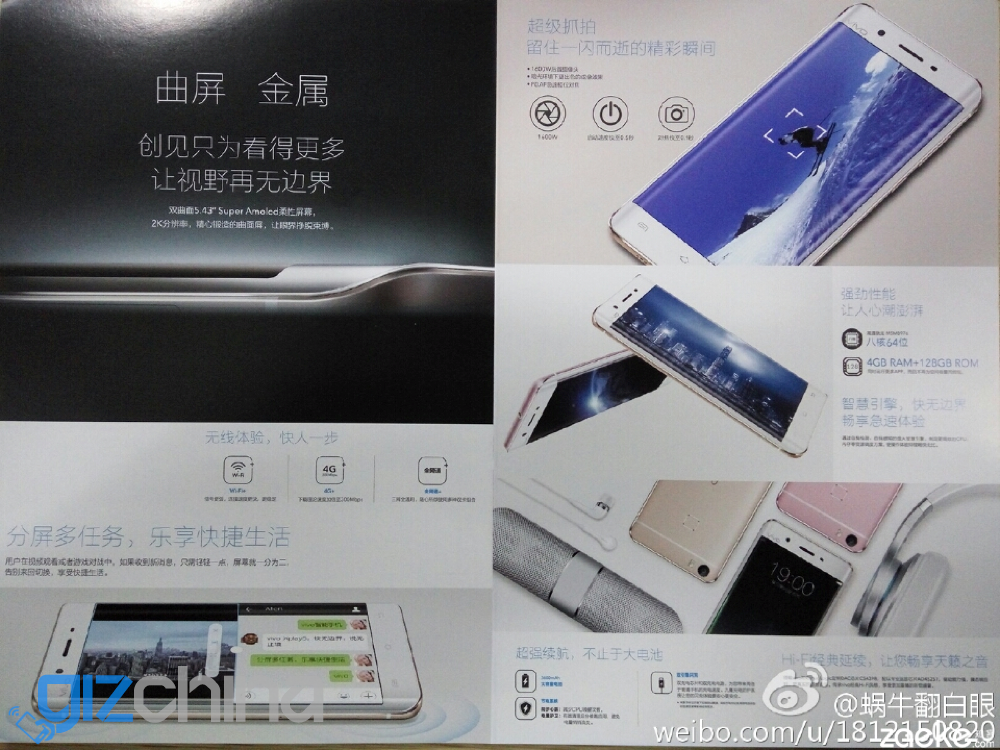 The specs also list just 4GB RAM, where as Vivo’s own teasers mention 6GB RAM. 4GB RAM is also what the benchmarks listed, so is this a ‘lite’ version of the Xplay 5? We won’t know for sure, but very early Vivo Xplay 5 leaks did mention that Vivo might be using 2GB memory for graphics only, were not sure if this is the case or how that will work with the Snapdragon 820 but it would explain the difference in specs. There could also be 2 versions of the phone launching that would explain these specs and the earlier teasers.

Internal memory of the phone is listed at 128GB, or which 111GB is expected to be available to the user.

For those of you planning to buy the Vivo Xplay 5 from China and ship it home it might be worth noting that the specs here list the phone as having only FDD-LTE support for bands 1 and 3, however in the past Vivo (and Oppo) phones have been proven to work on more international bands than officially listed and hopefully this might be the case here.

One last interesting detail is the left hand image on the second leak. This photo shows that the Vivo Xplay 5’s Funtouch OS has dual screen support built-in meaning you can run 2 apps at once! Very cool.

It still remains to be seen if these leaks are the real deal, but we will know for sure tomorrow.