Sources in the know have released an image of the Huawei P9 and its dual camera design boasting the Leica branding.

Back in February it was announced that Huawei would be working with Leica in the future, the news came as a great surprise to many as Leica are well-regarded in the camera industry for offering some of the best lens and camera software in the business.

Rumours soon told that the dual camera design of the Huawei P9 would benefit from Leica input, and now a leaked image seems to confirm those suggestions. 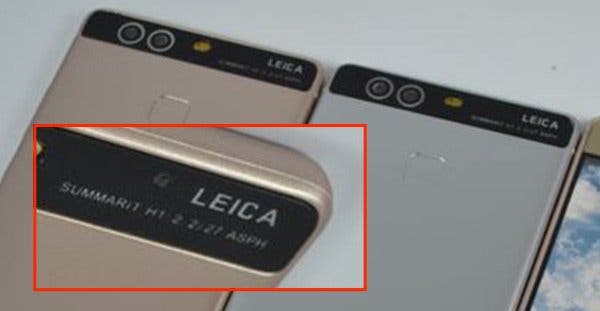 The photo shows the rear of the Huawei P9 (which we have seen in numerous leaks already) but this time with Leica decals too.

We can also see from the rear that the P9 will come in gold or silver, and we once again see areas for the laser focus and dual LED flash.

The Huawei P9 is set to launch this month in numerous guises, the top of the range version running this dual camera design, 5.2-inch 1920 x 1080 display, up to 4GB RAM, and a Kirin 950 chipset. There is also a Huawei P9 Lite rumoured to come but without the dual camera design and an Huawei P9 Max too.

All phones are expected to launch at an April 6th event. Stay tuned for details.