Speaking on Weibo, Huawei head honcho Yu Chengdong has spoken out against the use of 2K displays and how they are a ‘waste’.

Huawei have long stood against the use of 2K displays on phones stating that it’s not necessary to use such a high resolution on a mobile device and that the higher res would effect battery life and performance.

Huawei aren’t alone either, as many smartphone users agree including myself. While 2K might sound great on a spec sheet or when bragging to friends, there really isn’t much of a need (I was this as a daily user of a Vivo Xplay 5 and OP2).

Earlier today though Huawei boss Yu Chengdong has gone a step further saying that 2K screens are a waste. He goes on to post that a good HD screen can be good (using the iPhone as an example) and that a 1080 panel is more than good enough. 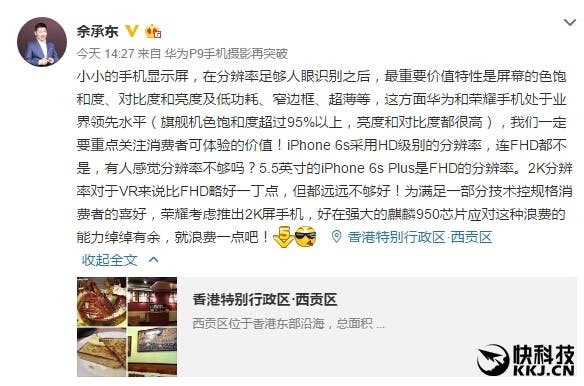 Although the company does feel that 2K screens aren’t worth adding to phones it doesn’t mean that we won’t see more 2K Huawei phones in the future. In the same Weibo post Yu also admitted that ‘enthusiasts’ wan’t 2K phones which could lead to more 2K devices going on sale rather than being a beneficial feature.

What are your thoughts on this? Are 2K displays a waste in a mobile application? Are you happy to stick with 1080 FHD? Or do you want to see other screen innovations rather than just higher resolutions?

Next UMi Super rumours hot up with Snapdragon 820 possibility