The Doogee P1 is a pint sized projector with some great ideas, but how does it perform in real life?

Doogee sent over the P1 Projector a while back and it’s taken me a bit longer than usual to get the review up for two reasons. 1) I’m super busy, and 2) I was unable to get the device to fully work.

The first issue is entirely on me, but the 2nd issue is a bit odd. At MWC I saw the P1 Projector work with iOS (iPhone) and a Macbook Air, but my test model refuses to connect to anything but Android through Miracast. I’m not the only one either, other reviews have had luck with iPhone’s but not their Mac’s. 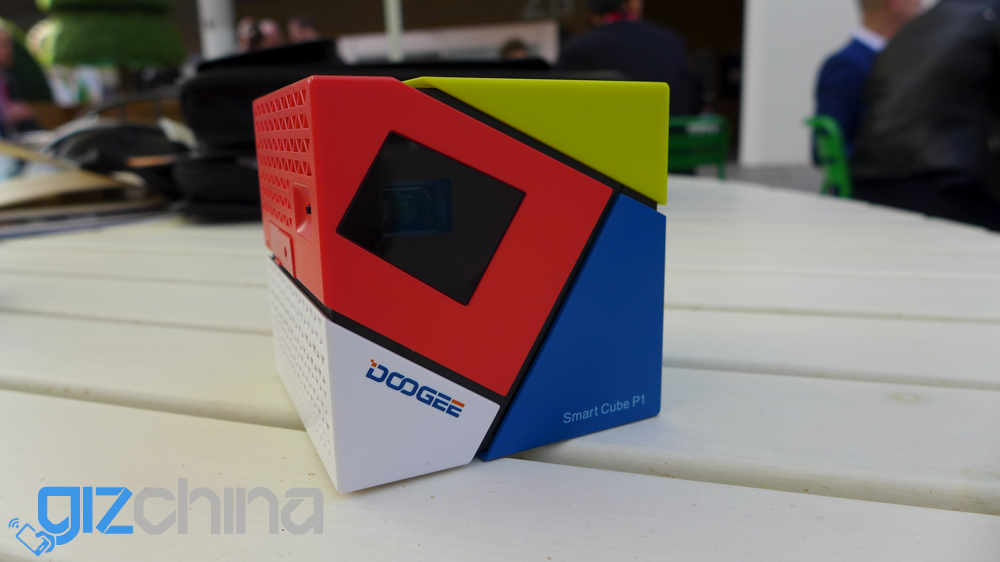 So this review is entirely based on my use of the P1 with Android devices. Im in touch with Doogee and will update you if I’m able to get the P1 to work with other devices, and I will try as the idea behind the product is a good one. Doogee have designed the P1 to look like a Rubiks cube, implying that the product is fun, playful and simple to use. The bright coloured box measures in at 62 x 62 x 62mm and would look right at home in a kids room, but the bright colours and design look out-of-place in a living room (mine at least).

The front of the P1 is where the lens is located, and behind that is a 70 lumens bulb. To the right is a focus dial for the lens, power button, and USB plug for charging. On the left is a USB 2.0 so you can plug-in a USB device for playing content directly or to even use the P1’s built in battery as a power bank for other devices.

The rest of the Doogee P1 is left blank save for the bright colours and a few vents for the cooling and speakers. The small simple design is what really draws me to the idea of the Doogee P1, I can think of numerous possibilities for the little box of tricks. One idea was to take to the bike park and use it to play GoPro footage over at the end of the day, another was for watching movies while camping, and we planned to use it as a movie screen in the kids room for when their friends came over.

The P1’s hardware means that it should be able to connect to Android, iOS and OSX devices (there isn’t any current support of Windows). 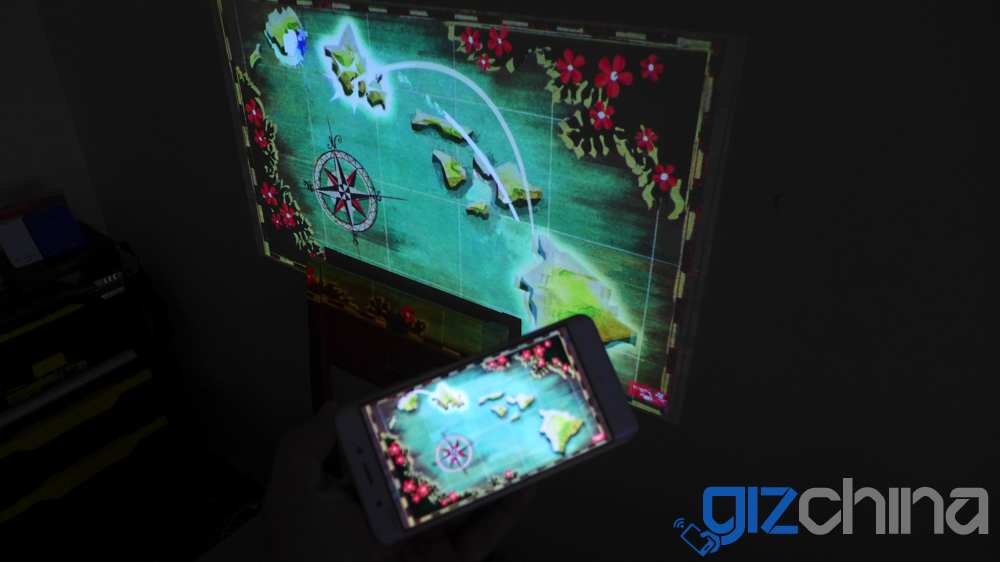 Android devices can be mirrored using Miracast and your Android phone/tablets wireless screen setting, while the PI is meant to support OSX and iOS devices, however in my testing I was unable to get either to work.

I know for a fact that OSX and iOS mirroring can work on the P1 as I saw it for myself at MWC, but my version of the produce refused to play nicely with Apple.

The P1 boasts 2.4Ghz WIFI for streaming content from your device to your wall, but you will need to make sure that both the P1 and your mobile device are on the same wireless network for it to all work. To do this you can use the P1’s app (available for Android and iOS). The app allows you to control the P1, and also head in to the setting and run you through the set up. Although the playful design suggests that the P1 is easy to use, the initial set up is annoying, buggy and unstable. After hours of trying to get my iPad Pro connected and failing I moved over to Android. It’s a much simpler process but it’s not something a novice user would find exceptionally easy.

Once you have your phone connected to the P1 you can then switch the P1’s WIFI to your home WIFI network, then you can reconnect your phone. This will allow you to not only mirror your device, but also stream content from the web on to your chosen surface. 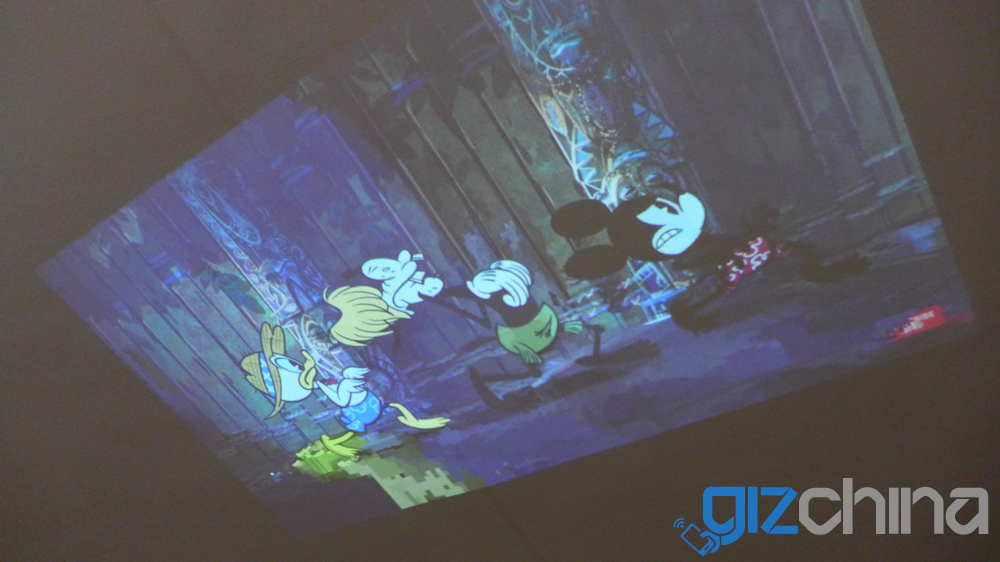 In my experience (using a Xiaomi router, and Vivo Xplay 5A) the stability of streaming is poor, to the point that even Mickey Mouse projected on the ceiling couldn’t keep my children entertained for long. Video will stop, buffer, and audio will be out of sync all to often. This is a huge shame as I really wanted the P1 to become apart of my digital lifestyle.

If streaming doesn’t work out for you though you can always plug-in a USB dongle or even load up content to the P1’s internal 8GB memory. Also take in to account that the P1 runs Android so you can (in theory) load games, apps etc on the device and use it as a self contained unit. 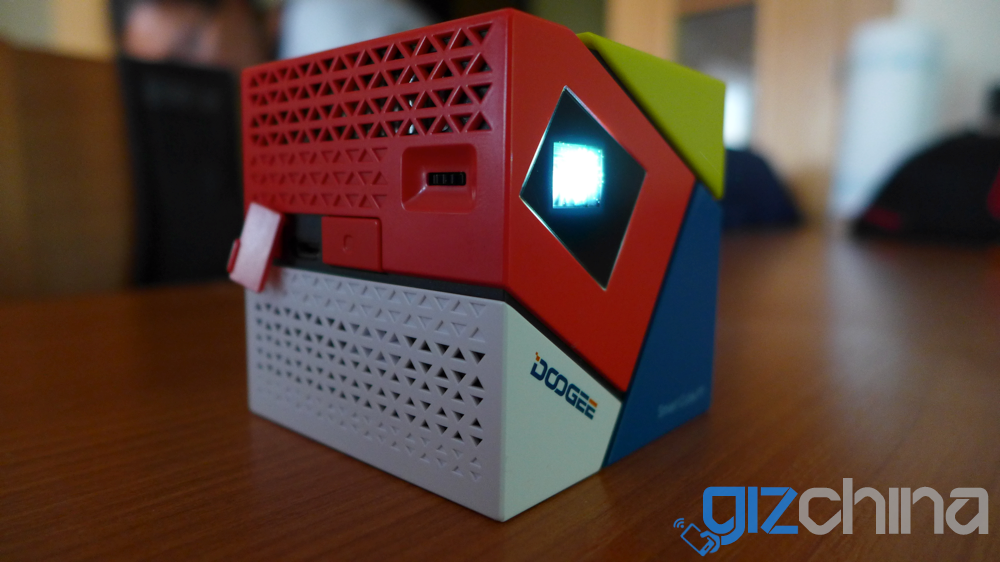 The Doogee P1 also has a built-in speaker, which has been praised for being quite loud, but in my case it was almost inaudible! Thankfully the P1 has Bluetooth 4.0 and I was able to connect an ADO Mate 3 to the box and run Audio through that. But this detracts from the idea of the P1 being a one stop media box, I don’t want to have to carry the P1 and a speaker with me.

Once you have the P1 projecting you can get a pretty huge image from the little box and even with just a 70 lumen bulb the image is clear in a lit room. With the 4800mAh battery full charged the P1 is claimed to give around 3 hours of usage, but my time with it resulted in closer to 1 hour 30 minutes. With content coming internally without WIFI you should be able to stretch this but not double it.

I was excited to see the P1 at MWC and I hounded Doogee for a review unit. I could see a ton of possibilities for the projector and really did try to get the thing working.

In my experience the set up is frustrating, the streaming poor, audio terrible and connectivity is limited to just Android devices. I’ve spoken to Doogee a lot about the problems I’ve had and to their credit they have been very helpful and they have even made videos that attempt to solve these issues (indicating other reviewers have had the same problems).

Despite their best efforts though the P1 still isn’t working as advertised and Doogee’s final word on the matter was “this is a pre-production version” the standard response when things don’t work. Hopefully updates will solve the P1, and perhaps the productions versions are better, but we can only go off what we have experienced ourselves.