Elephone burst in to the action camera scene last year and since then have released subsequent devices including one of the most affordable 360 camera’s on the market, but is it any good?

Elephone gained quite a bit of a reputation over the past few years. The company is known for headline grabbing specifications and prices, but are equally infamous for their delays, bugs and other issues. Despite their mistakes though, Elephone have gathered quite a fan base which gave them ample opportunity to expand their business to include other devices. 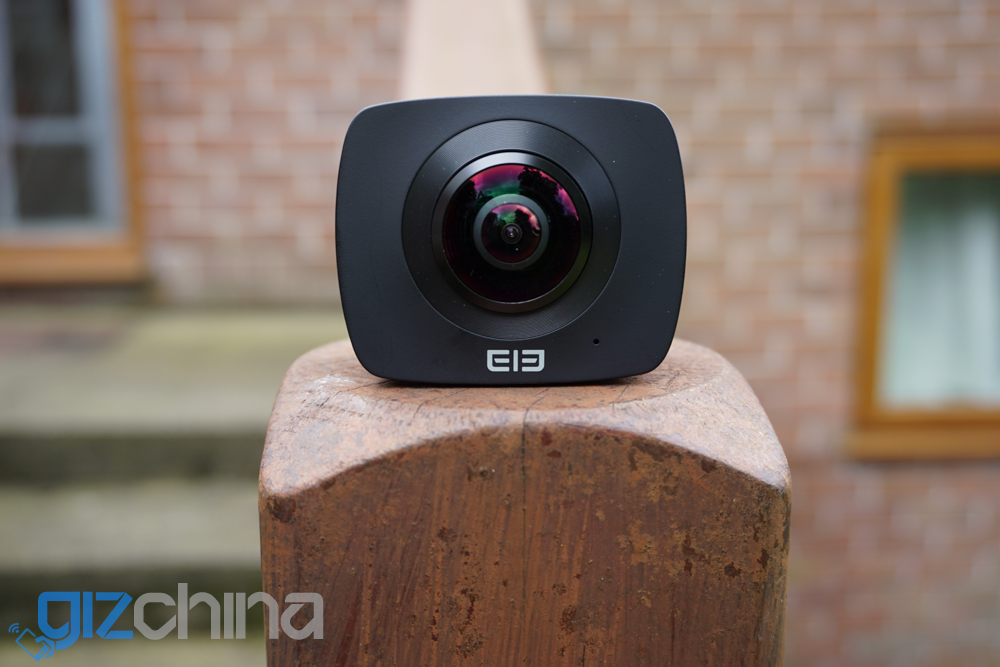 To help support their phone range, Elephone have released accessories as far flung as an E-cigarette to action cameras, and it’s action cameras that they are sticking too.

Elephone EleCam 360 Review – What is it? Elephone already launched their Explorer and Explorer Pro, but the problem was that so many other brands also had very similar cameras. To make the Elecam sub-brand really standout Elephone really needed some special and that’s where the EleCam 360 fits in.

Not only is the EleCam 360 come at a time when big names are venturing in to the 360 space, but it also comes to the market as the most affordable (at the time of writing) method of getting in to sphere photography and video. 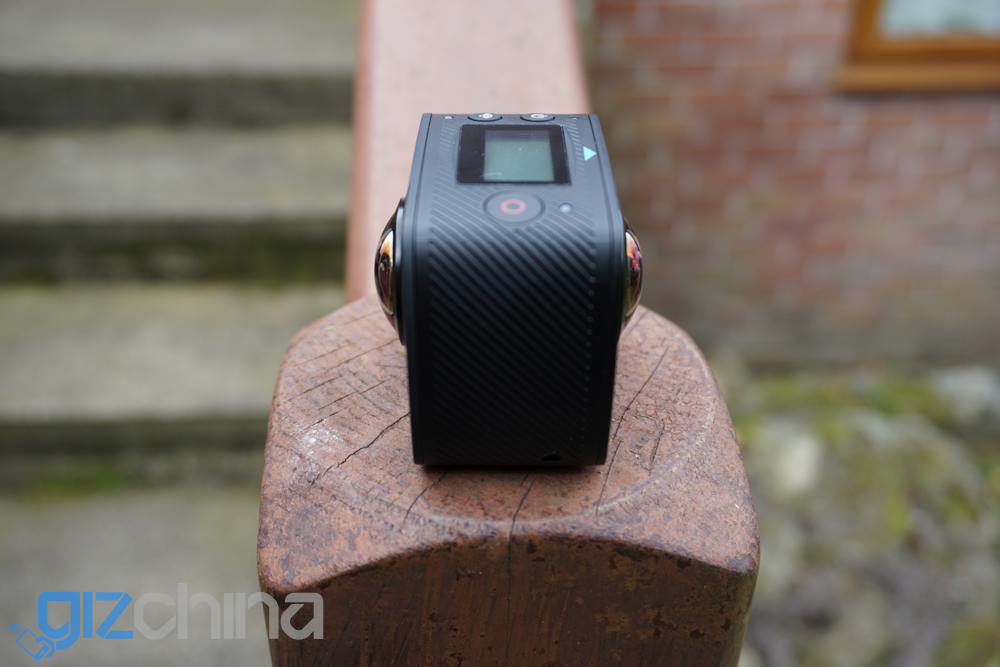 With 360 cameras still being rather new on the market we have seen plenty of variation in design and implementation, and in this case we have an Elephone device that looks like nothing else on the market. 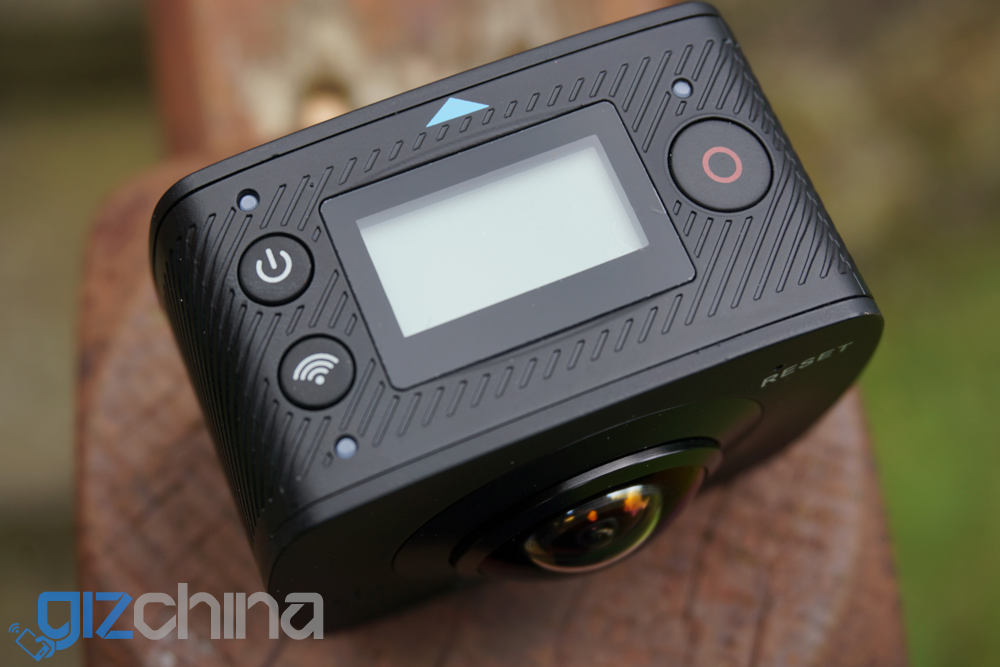 The body is a simple black plastic structure with a basic, but easy to read LCD display in the top, while the front and rear of the camera has a camera each behind a bulbous glass lens. These dual camera and super wide-angle lenses (both offering 220 degree views) are what makes 360 video and photos possible with the new EleCam. Images are taken simultaneously from the lens and then stitched together by the SPCA6350M processor to give live sphere views that can be viewed either via the Elephone EleCam 360 app and hand gestures, or using a set of VR googles. 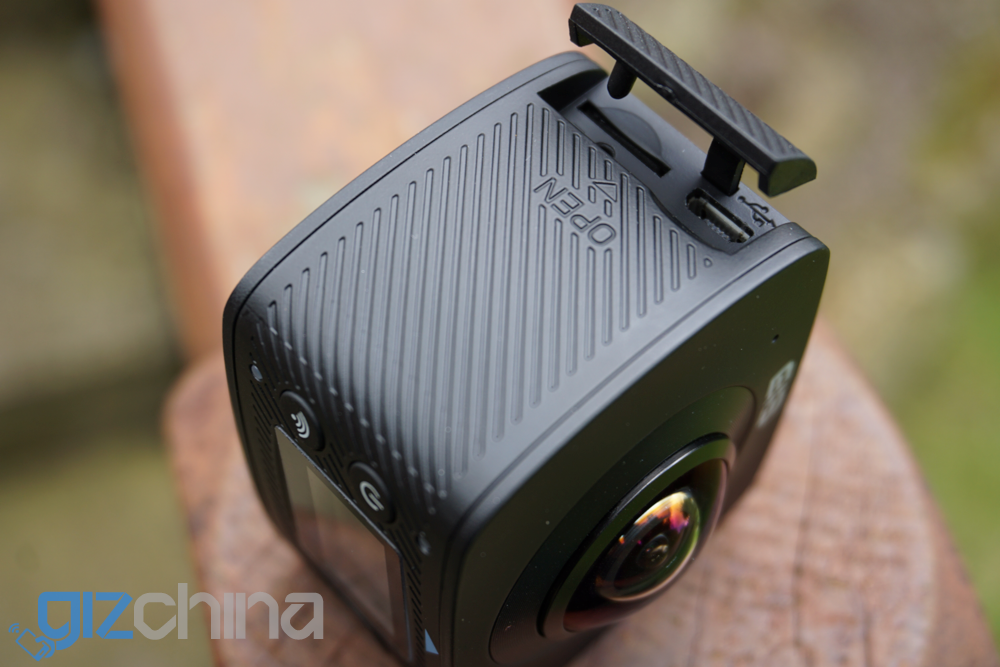 Images and video are recorded on to SD cards (up to 32GB) and can then be transferred to your PC, of if you like you can connect to the camera via WIFI and move media that way instead. 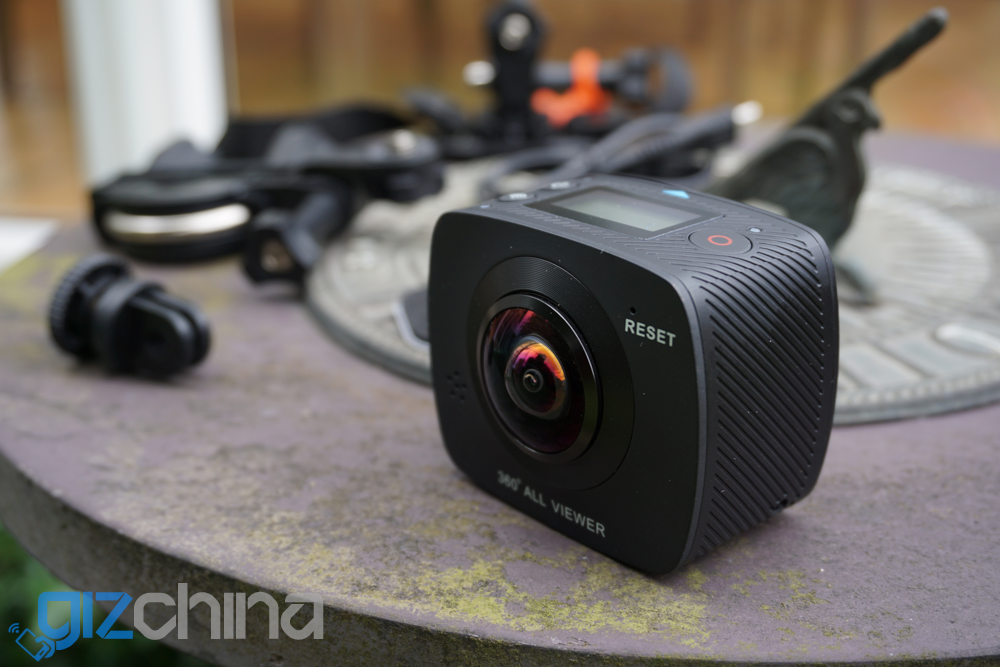 I’ve already mentioned the dual 220 degree lenses, well behind them are a couple of Omnivision OV4689 images sensors. According to the Omnivision website, these sensors are 4 mega-pixel shooters that can record video at up to 1920 x 1080 @ 30fps which is exactly what Elephone claim on their site too. 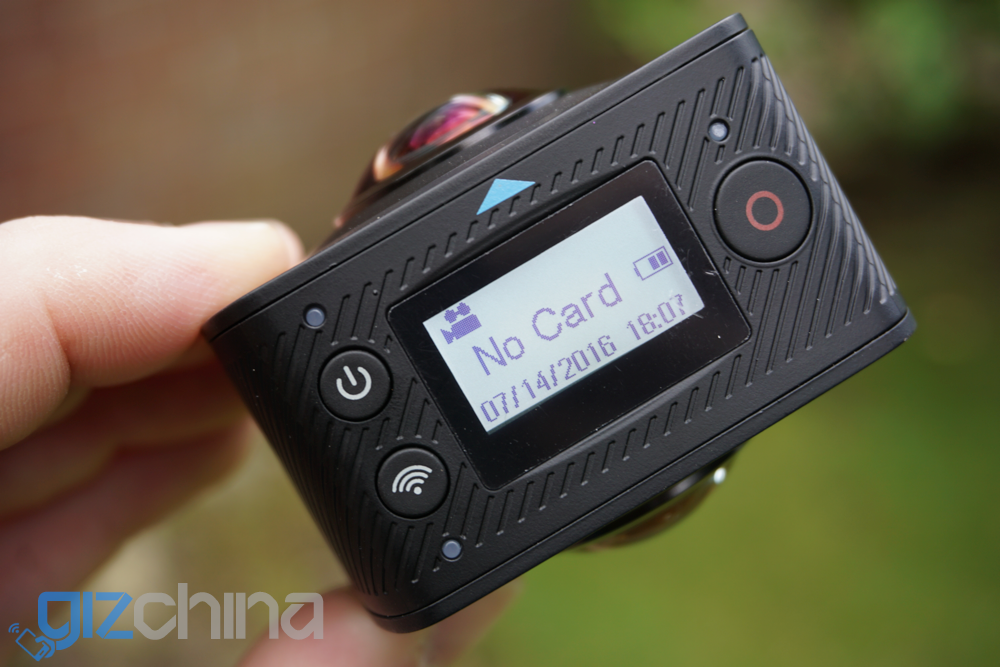 At the top of the camera is a small LCD display which gives basic information and setting details. The top is also where we find the record button, a hardware button for setting up WIFI and a power button.

There is only one door on the EleCam 360 and that opens up to show where the USB port and micro SD dock are located. The door isn’t sealed to protect the camera from the elements so don’t go diving with the EleCam 360, or use it in the rain. In fact the design doesn’t seem all that rugged really with no protection for the two large glass lenses and no visible protection against dust either. Usually EleCam cameras are supplied with a waterproof housing, but in the 360’s case there isn’t one. 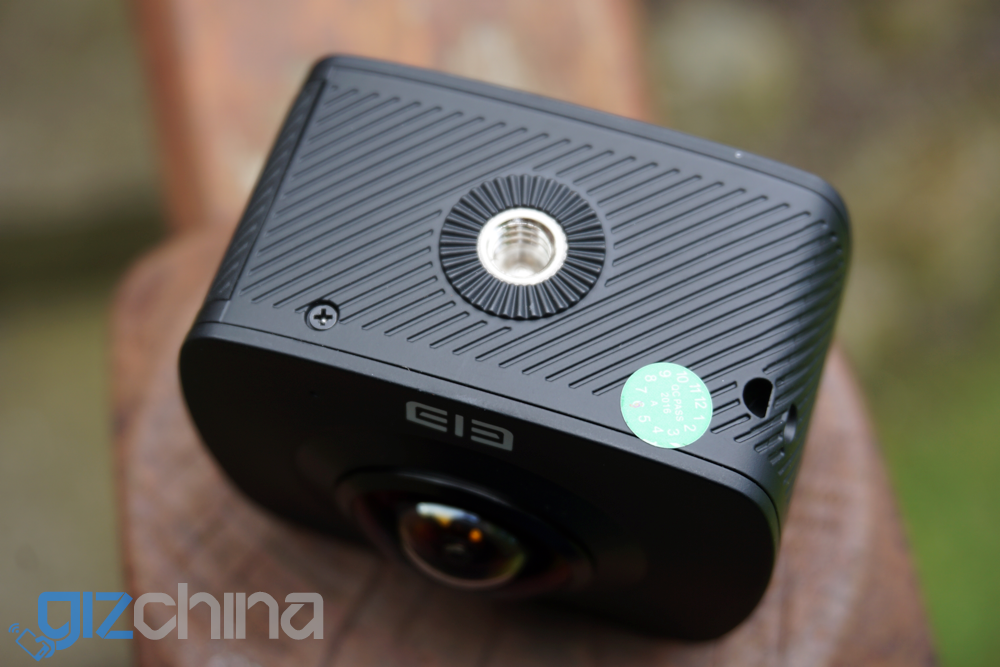 The lack of case also means that you don’t get a GoPro style mount built-in to the camera, but there is a mount which screws in to the tripod mounting in the base of the camera which can be used with GoPro style attachments.

Also finally the compartment door on the EleCam doesn’t give you access to the battery which is sealed in to the device. While a sealed in battery might not be to everyone’s taste the good news is that it’s a large 1500mAh battery which enough juice to get your through a full 60 minutes of video recording. 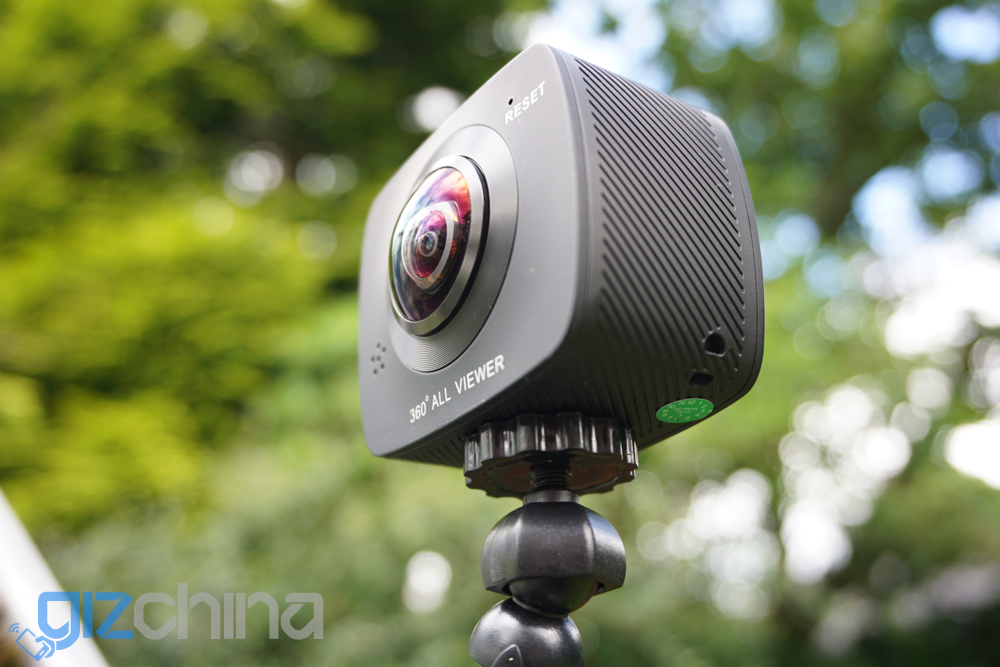 As mentioned above the EleCam doesn’t come with a waterproof case, but they do offer a helmet mount, handle bar mount, chest mount, tripod, USB cable and a couple of double-sided 3M stickers with the camera to help you mount the device where you like.

Booting up the camera is simple and the default language setting is English (but you do have the option to change that). I downloaded the EleCam app on my OnePlus 3 to start with, but the EleCam refused to be seen and I couldn’t get the camera to connect with any Android device. I did however get the camera to see my iPad and connect to it with the Elephone app.

Once connected to your device you have an option of views. You can either see a live view as a sphere and use onscreen gestures to move about, or you can switch to a motion view so you have to actually move your device around to see different views (this is the setting you would use when choosing to view media through a pair of VR goggles).

Overall the effect is good, and easily as good as 360 cameras from the big names, and on the surface that sounds like great praise, but in reality all current 360 cameras are generation 1 products and none are perfect yet.

As with other cameras there are times the camera will overlap certain areas, show something twice and the odd occasion there might be a black gap in an image, but overall the performance is about as good as current 360 tech can take us for now. 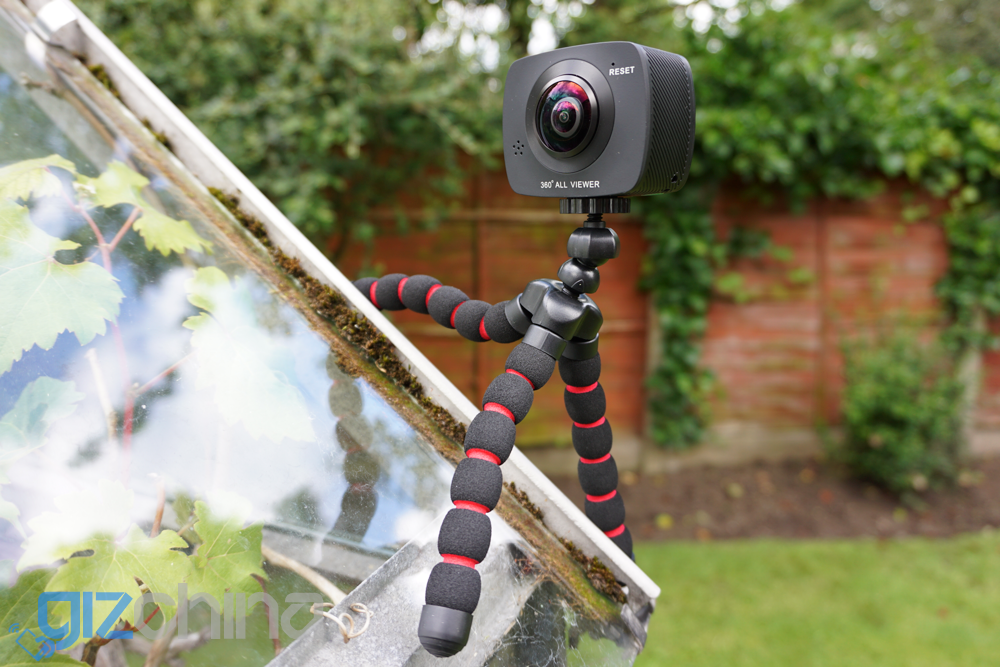 So what we have here is a 360 camera that works just as well as similar devices from LG and Samsung, but costs on a faction of the price and is easily available to buy now. Elephone’s timing is perfect too, for those of you who like to adopt new tech early the EleCam 360 is financially a better purchase and doesn’t lack in features or performance (but remember this is all gen one tech and none are perfect). 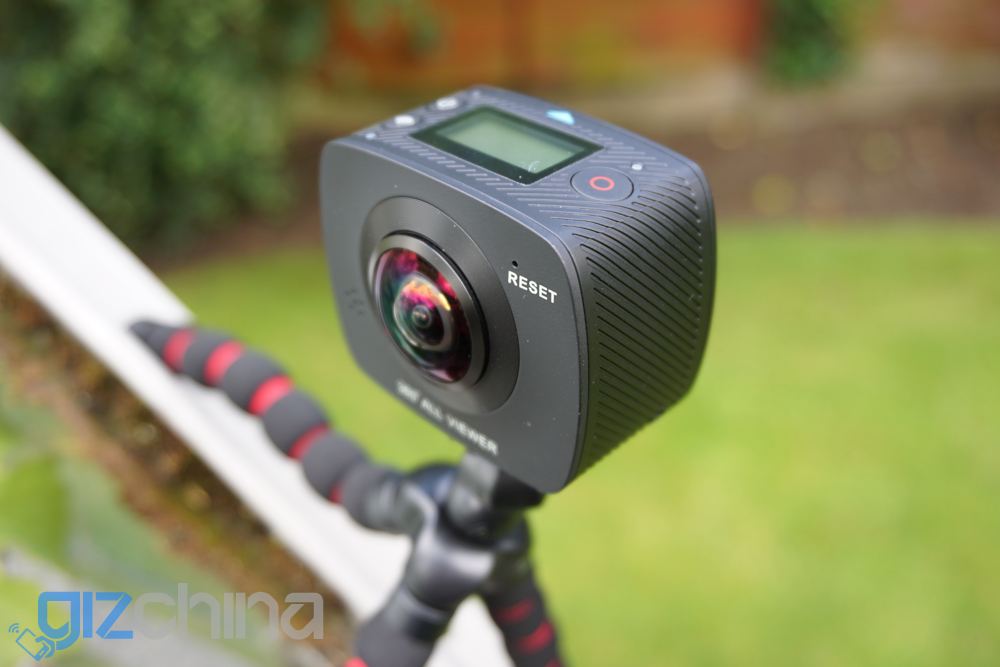 In my experience with 360 video too, I believe the Elephone EleCam would be the 360 camera I would personally buy too, simply because I don’t really see the need to use such a device. 360 is fun for messing around with for a while, but I don’t think we are at a point yet that the technology is going to replace regular photos or video.

The EleCam 360 can be ordered now from Shop.GizChina.com.

Next In pictures: Xiaomi Redmi Pro (rear) and Mi Notebook