If there’s one product that we’ve been waiting to review, it’s the Huawei P9. The Chinese company’s flagship phone has been earning quite the hype thanks mainly to its dual Leica rear cameras, and Huawei has been pretty smart about cultivating that hype. We’ve finally gotten one for review, and today we’ll be seeing what the device looks in person.

Huawei’s P-series of devices has always been focused on design and features before specs. While that may not appeal to the tech geek, they’ve committed a lot of resources to make the device look and feel as premium as possible, and that starts with the packaging which is much different compared to the packaging of their previous devices.

While P-series devices usually come in black and gold boxes, the P9 comes in a minimalistic white box with Huawei and Leica branding. Once you open the said box, you’ll see the phone inside (gold in our review unit’s case), along with the words Huawei Design.

All in all, it’s your typical Huawei packaging, not much in the way of surprises.

I’ve seen plenty of videos with the Huawei P9 in them, and I thought the design was quite nice. But there’s quite a big difference between seeing the device on the screen and when you’re actually holding the phone in your hands – and believe us, photos don’t do the phone justice. It’s definitely one of the more visually stunning devices I’ve had the chance to use, up there with the Mi5 and Galaxy S6. 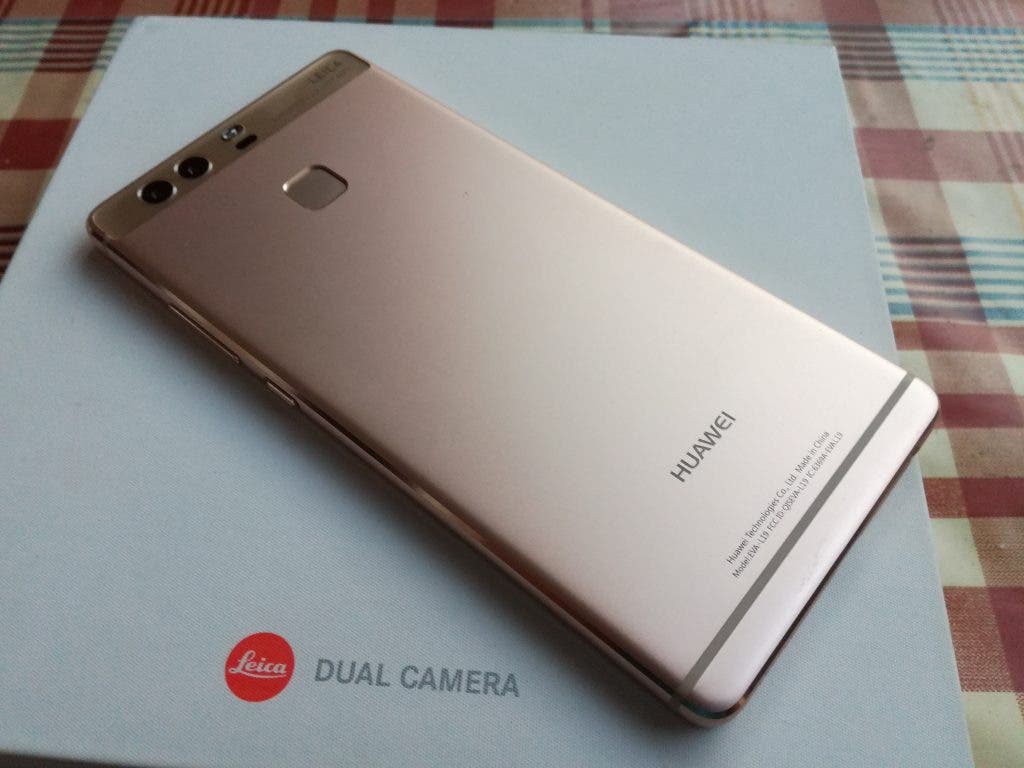 The Huawei P9’s design is relatively simple to explain, so let’s start at the back. The phone has a matte metal finish that subtly shines in the sunlight. It’s very premium looking, and the dual cameras do grab quite a bit of attention. The phone is also pleasantly light, which works to the P9’s favour.

The metal frame of the device has beveled edges, and the dual 12-megapixel Leica cameras with an f/2.0 aperture, paired with an dual tone LED flash and laser autofocus. I haven’t thoroughly tested the camera, but from the brief period that I’ve played around with it, it seems quite impressive. Low light shots especially are handled very well.

The SIM and microSD tray is on the the left of the device, while the power button and volume rocker are on the right side. The phone’s 3.5mm jack and USB port are both at the bottom of the device, just like previous P-devices.

Up front you’ll see the 5.2-inch IPS full HD OGS display, as well as the 8-megapixel front camera with an f/2.4 aperture. The phone doesn’t have any capacitive buttons, instead opting for software buttons. Despite that, the phone still has a chin decked out with the Huawei logo.

While Huawei’s P-series devices have traditionally had rather average hardware, the P9 is an exception. The device packs Huawei’s own Kirin 955 octa-core processor paired with 3GB of RAM and 32GB of expandable storage. The device runs on Android Marshmallow 6.0 with Huawei’s controversial EMUI 4.1 on top of it.

So far, I’ve ran into no performance problems, be it just doing menial tasks or playing games like Need For Speed and Pokemon GO!. While the spec hungry may be left wanting more, the device is still more than powerful enough to handle everything you’d want it to do, and the device also doesn’t get as hot as its predecessors when under pressure.

That’s pretty much it for now. We’ll be taking the phone out and using it as our primary phone in the next few days.If you’ve got any questions or things you’d like to see in the full review, feel free to write about it in the comments!

Previous Xiaomi launch another cool gadget and I really want it

Next Can you see some similarities between the UMI Max and iPhone devices?