Xiaomi could be set to launch a new home device along with new phones tomorrow, with they mystery device expected to be called the Mi Brain.

We are all fairly certain that Xiaomi will launch the Mi5S tomorrow and it is possible that the Mi Note 2 (Mi5S Plus as it might be called) could also be announced, but what about the Mi Brain?

Rumours today are that Xiaomi could launch a new device for the home that might merge Xiaomi’s TV box features with those of a smart home hub. In theory, this could mean that all of your Xiaomi smart home devices (robot vacuum, washing machine, air purifier, light bulbs etc) could be connected to the “Mi Brain”.

This leaves the only question being “Why?” after all, all of Xiaomi’s home devices can be connected to your Mi Account and operated via a single app on your smartphone, so what possible features could the Mi Brain offer? 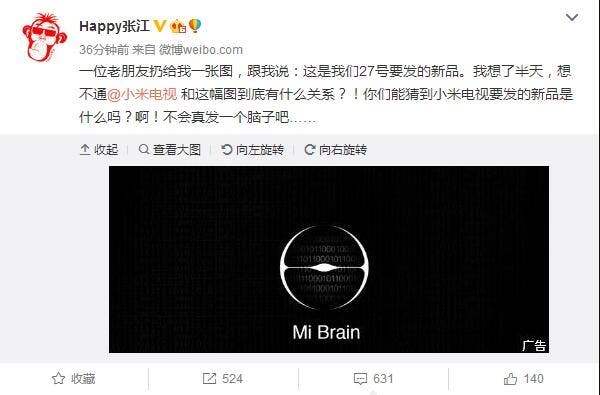 One possibility could be that the Mi Bran will feature voice control features meaning not only will you be able to interact with your home through voice control, but could also allow you to order food, products and play media through it too. Think of it as the Chinese equivalent of Amazon’s Alexa voice service.

Whatever the Mi Brain might be we only have a few hours to wait and see.

Previous Xiaomi Mi 5s: All we know so far!