Earlier today Meizu announced the Meizu Pro 6S and already the phone is up for sale via resellers.

In the run up to the launch of the Meizu Pro 6S we saw many rumours and leaks and got to wondering exactly how this new phone would differ from the original Meizu Pro 6, well today that question was answered along with a few more details.

The Meizu Pro 6S is essentially the same as the previous Meizu Pro 6 only the new phone has had some improvements by way of a larger battery and a better rear camera. 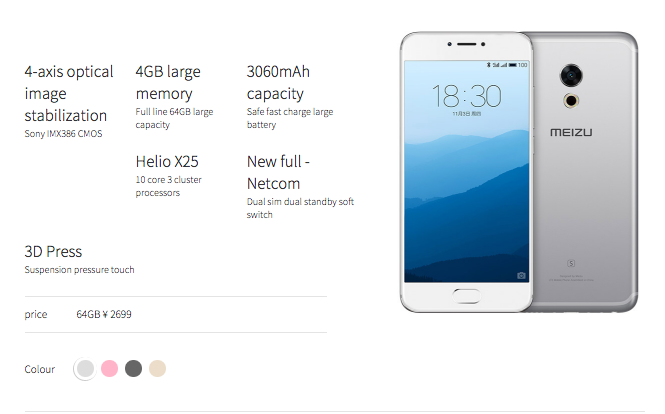 Meizu has ditched the 21 meta-pixel sensor that they used on the original Pro 6 and replaced it with a 12 megapixel sensor. Now on the surface that sounds like a downgrade but in reality the new IMX386 sensor with 4 axis OIS and F2.0 aperture should perform much better.

The second upgrade is in the size of the battery, with the Meizu Pro 6S getting a significant battery increased from 2560mAh to 3060mAh.

Other than those two changes the rest of the phone remains unchanged with the phone running a Mediatek Helio X25 chipset, 4GB RAM, 64GB internal memory, and 3D touch pressure sensitive display.

Pricing in China is a reasonable 2699 Yuan while resellers have already listed the phone and have it priced at $561.09.

For those of you wanting the Meizu Pro 6S you can order the Gold, Silver and Black variants online right now.