Just a day ago, there appeared on Twitter a certain tweet that made theorists put on their thinking caps. With the Samsung Galaxy Note 8 launch not coming anytime in the next month or two, and the rumors of it being the first Samsung phone with a dual camera setup, this tweet comes as a surprise. Not just this, the same source has now shared an image which might be hinting towards a Samsung Galaxy C phone with a dual camera setup.

The image of the sketch shared by the source does show the phone having a dual camera setup on the back. But there is no confirmation on how official this seemingly hand drawn sketch is. 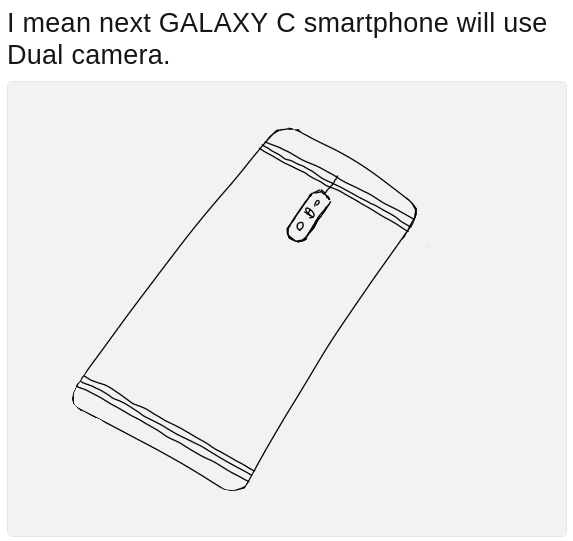 From what we can infer from the image, the LED flash seems to sit between the two camera sensors. Samsung launched a few Galaxy C-branded phones last year and a few planned for this year have popped up on TENAA. So there might be a possibility of a new Galaxy C branded smartphone.

Some expected the Galaxy S8 and S8 Plus to feature dual camera setups on the back, but Samsung chose to use the same 12MP sensor they used in the Galaxy S7 and S7 Edge. The chances of the Samsung Galaxy C coming to the market before the Galaxy note 8 are pretty high considering the fact that there is no date on when the phone will be launched.

Previous Huawei MediaPad T3 Lite 10 gets certified by the FCC