Vernee is about to launch their first model with a massive battery and the Vernee Thor E is getting an unexpected spec bump just few days before it’s out. That’s never a bad thing and the original budget-like specs are now looking slightly better, even though the upgrade is made with an older type of processor.

Yes the chosen one to replace the originally announced MT6737 processor is our old friend octa-core MT6753, but strengthened with adding more RAM so now sporting 3 GB. The phone will have 5-inch display with HD resolution, 16 GB of internal storage, 8 Mpix camera, Android 7.1 as the OS and mainly the big 5020 mAh battery with 9V/2A fast charging support. In the list of specs is still haunting the “E-ink ultra power saving mode”, but from the video below it’s quite clear it’s really just a mode activated with a special button and not really the E-ink screen itself.

Vernee Thor E should be out really in matter of days, because the release date is planned for early May. And even with the upgraded specs the announced price shouldn’t go up so it will stay at the $130 mark. You can already reserve your piece at the Vernee’s website and doing as such will reward you with a $20 coupon for buying it. 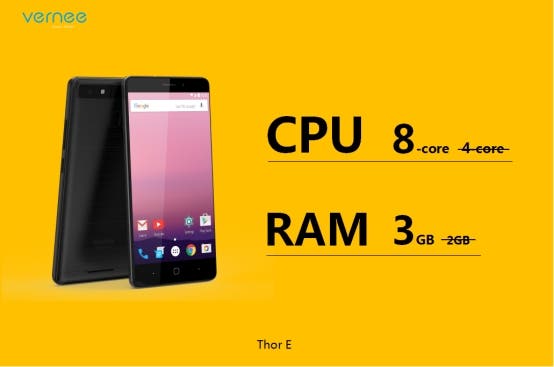 Next Blackview Holding May Discount Event