The Nubia Z17 has been a hot topic for many weeks now. With leaks and news coming from every nook and corner, there’s hardly any time left before Nubia unveils their flagship smartphone. There have been rumors of the Z17 sporting a near bezel less design, and having a pressure sensitive display. The latest news to pop up is the presence of Quick Charge 4.0 on the Nubia Z17, which will make it the first smartphone to feature QC 4.0. 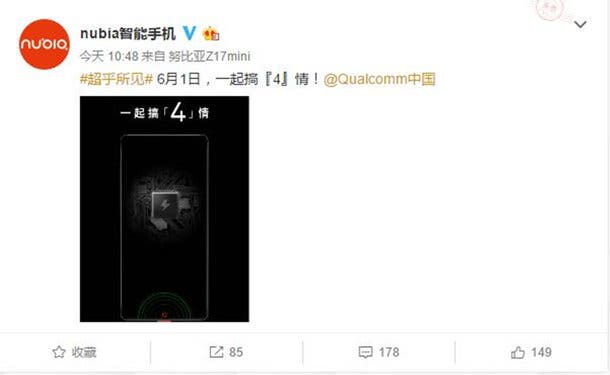 Quick Charge comes with the Snapdragon 835, which is currently the flagship favorite chipset. However, the Samsung Galaxy S8 and S8 Plus do not feature Quick Charge 4.0. Rather, they feature 15W QC 2.0.

The leaked specs of the Nubia Z17 confirm the presence of the Snapdragon 835 with 4GB of RAM and 64GB of onboard storage, as listed on TENAA. Speculated to launch in June, the presence of QC 4.0 will put the Z17 a step above the other flagships.

With all the leaks and news floating around, the Nubia Z17 sure looks like a promising device. Watch out for more!

Previous Andy Rubin's Essential ready to be unveiled on May 30

Next ZTE Blade V8 Mini pops up on FCC