The upcoming budget piece Leagoo M5 Edge is trying to win the hearts and minds of customers not just with its edge-less display, but also plans to impress with the camera performance. Especially with the night shots, even though still keep in mind it’s meant as in comparison with similar phones in the segment.

Leagoo M5 Edge’s rear camera is a 13MP shooter with 4P lens and f/2.0 aperture, so the basics for capturing some reasonable night shots is surely there. And Leagoo is allegedly trying their best to tweak and optimize the software side of things too to get the best result possible from the camera. Crossing fingers. 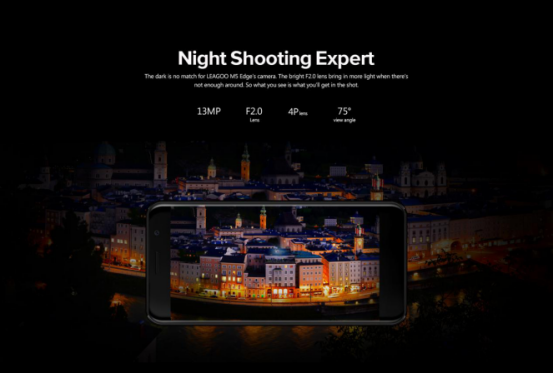 Rest of the specs of the Leagoo M5 Edge include 5-inch HD resolution display with 2mm narrow bezel, MT6737 processor, 2 GB RAM, 16 GB of internal expandable storage, 13MP rear camera, 8MP front selfie camera and Freeme OS 6.0. The phone should be released already this month with a retail price of $99.99.