Well I guess now it’s official guys and you can finally decide on which Xiaomi smartphone to buy (or not to buy) depending on whether it will get the Android 7.0 Nougat update or not. 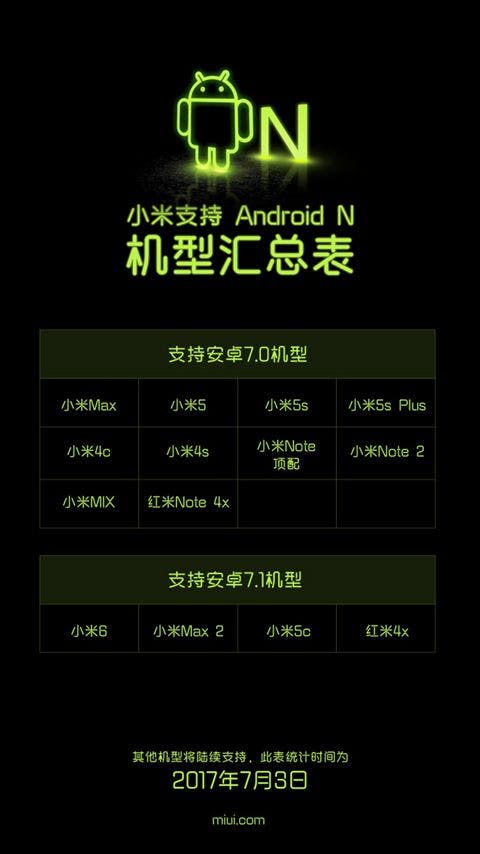 The Chinese company released earlier today a list containing all eligible smartphones for the most awaited Android 7.0 Nougat update (although some of them will get up to Android 7.1 for all that’s worth). Among them we can spot the Xiaomi Mi4c, Mi4s, Mi Note, Mi Max, Mi 5, Mi 5s, Mi 5s Plus and Redmi Note 4X models, scheduled for an update (or some of them having already received it).

The same list mentions that the Mi 6, Mi Max 2, Mi 5C and Redmi 4X models will be lucky enough to get the Android 7.1.1 update, and we shouldn’t forget the Mi Note 2 and Mi Mix models as well.

Note that some devices didn’t make it on the list (take the original Redmi Note 4 for example) and some others were surprisingly on it as the Mi Note for that matter. If your device is not on the list, don’t lose hope yet. You may at least get MIUI 9 and have access to some features from Android 7.0.

Next Meet the LG G Pad IV 8.0 FHD, one more mid range tablet for you

Xiaomi Mi Note 10 has an OLED panel from Visionox