The Xiaomi Mi Note 3 has been the topic of speculation for quite a long time. And Xiaomi’s president has now revealed that the Mi Note 3 will be launched soon via a Weibo post. Lin Bin hinted towards the Mi Note 3 being a larger version of the Mi6. 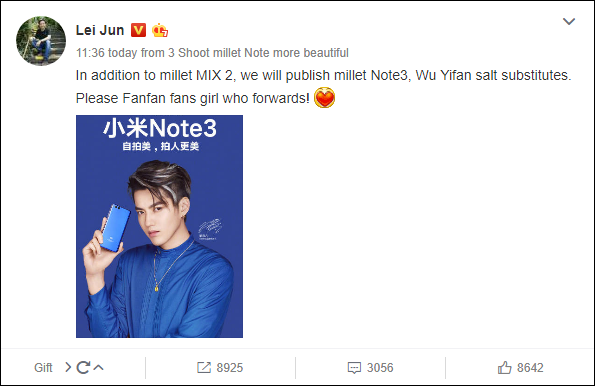 The poster uploaded with the post says the same about the Mi Note 3. This means that the Note 3 will feature a larger screen and body but will retain the specs of this year’s flagship by Xiaomi, the Mi6. Powering the Mi6 is the Qualcomm Snapdragon 835. The Mi6 features a 5.15 inch display with curved sides, and the Note 3 might feature a 5.7 inch display. 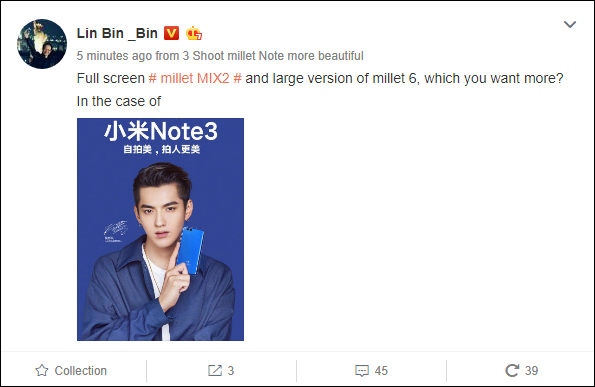 Along with the Mi Note 3, Xiaomi also mentioned the Mi Mix 2. Although the date of launch has not been revealed, both the smartphones are expected to launch on the 11th of September. The poster shows Wu Yifan holding the Mi6. He has been the brand ambassador of the recently launched Mi 5X. Another tweet by Lin Ben puts forward the question to the readers, whether they would orefer a larger Mi6 or a bezel-less Mi Mix 2.

We are hoping to see two brand new and exceptional devices to be launched by Xiaomi. Stay tuned for more!