Samsung Electronics has toppled Toyota to become Asia’s most valuable brand for the first time and the 6th most valuable brand in the World. The latest report of 2017 Best Global brands by US consultancy firm Interbrand enlist a total of 11 Asian big brands, but sees a lot of South Korean firms edging their Japanese counterparts.

On a global scale, the Interbrand valuation report of most valuable global brands positions Samsung in sixth place, one position up compare to previous year’s report.Samsung Electronics is the first non American firm on this list.

A recent report by HMC Investment & Securities has predicted Samsung Electronics operating profit could rise to about $13.6 billion in the fourth quarter of 2017- a feat which is attributable to Samsung’s chip manufacturing arm whose revenues ensured that it leapfrogged Apple as the most profitable technology firm in the second quarter of 2017. 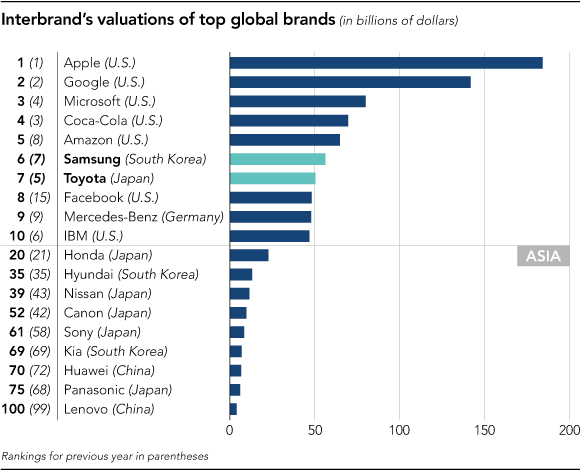 Apple Inc, Google, Microsoft, Coca-Cola and Amazon all of which are US firms are all on top the list and rated the top five most valuable brands in the World, while Toyota, Facebook and Mercedes all fall short of Samsung which occupies the 6th position on global ranking.

Next The NOMU S10 Pro goes Beyond IP68 - Is it the best waterproof phone?