After announcing the Huawei Maimang 6 smartphone last week in China and with rumors flying around that same device will head for Europe as the Huawei Mate 10 lite, Huawei has rebranded the same device for two other Asian markets with the unveiling of the Huawei Nova 2i in Thailand and Malaysia. While there is no difference between this and the China only version, China will pay more to acquire this device.

The major highlights of the Huawei Nova 2i are 18:9 aspect ratio display  and its quad-camera setup –two at the rear and two upfront similar to the Gionee S10 camera setup.

Outside variation in names, the Huawei Nova 2i is same as the Mainmang announced in China some days back and therefore share same specifications as well as designs.

It feature a 5.9″ display with virtually no bezels, a respectable 18:9 aspect ratio and powered by home grown Kirin 659 SoC with 4GB of RAM. The device is available only in 64GB storage option, but with support for memory expansion using microSD card slot. 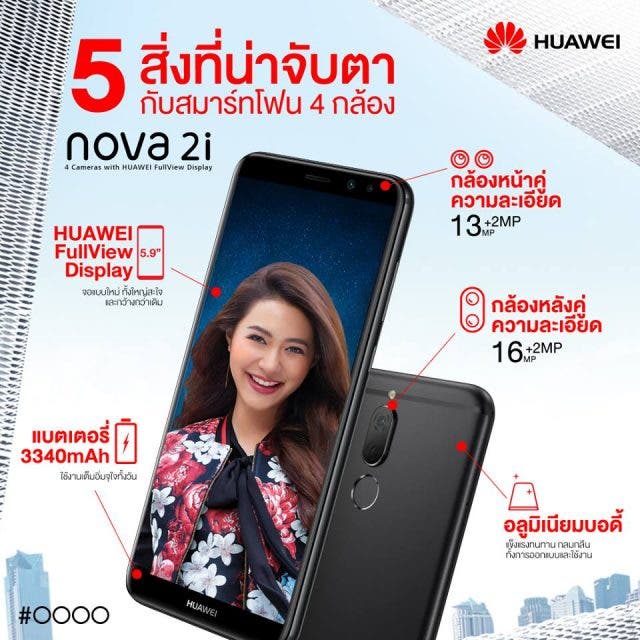 Talking of photographic features, Huawei Nova 2i boasts of a quad-camera setup –two cameras on the front for selfies and two on the reverse side. For the rear dual camera, there is a 16MP primary sensor and a 2MP secondary shooter. The camera supports portrait mode and can be used to create images with bokeh effect .The device supports similar dual front facing camera, but with smaller 13MP+2MP pixel counts.

Elsewhere, the Android 7.0 Nougat device has a rear fingerprint and it is kept lighted by a 3340mAh non removable battery.The device is expected to hit he stores soon in Obsidian Black, Streamer Gold, and Aurora Blue at RM1,299.