If you have been up to date with us, you will notice we are just hours away from Google’s big press event that will see the introduction of the Pixel 2 and Pixel 2 XL ,but then the Pixel 2 phones aren’t the only devices expected to be unveiled, we, in addition, expect the Google Home Mini as well as Google Pixelbook to break cover.

And while previous leaked pointed out few things to expect from Google’s premium 2-in-1 ultraportable Pixelbook, a fresh leaked from electronics reseller Synnex has shielded light on its basic configuration.

The retailer listed the Pixelbook as having a display of 12.3-inch representing a moderate reduction from the 12.85-inch display found on previous Chrome book pixel, the resolution at the moment isn’t known, but should be lower than the 2,560 × 1,700  of the last two Chromebooks.

The listing further confirmed there will be 128, 256 and 512GB storage options of the device with unknown Core i5 processor at the center stage, but failed to mention if there will be differences with respect to RAM size as well as processor clock speed.

The Pixelbook is expected to be unveiled alongside the much talked about Pixel 2 and Pixel 2 XL and is rumored to come with $1,199 -$1,749 price range with additional $99 if you choose to get the supported stylus/Pixelbook Pen depending on the storage option. 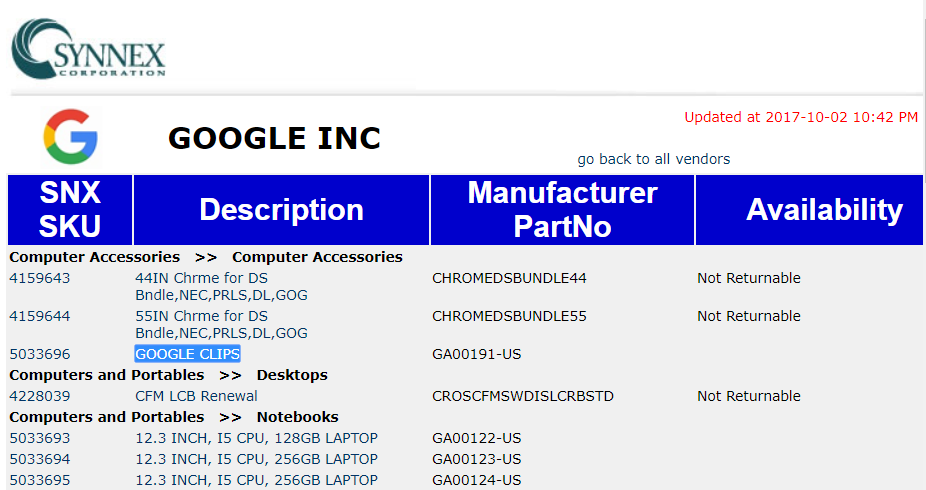 The Synnex listing also made reference to an unidentified device dubbed “Google Clips”, but failed to provide further details on it, but never to worry, we are just hours away, so keep an eye here as we keep you posted.