We’ve been in a roll this week with all the Huawei news of the upcoming Huawei Mate 10, to be unveiled in the next October 16. Now the news aren’t directly related to Mate 10, but to the software running inside, the Oreo based EMUI 6.

We already wrote that Huawei Mate 10 will come packing the newest Kirin 970, the world’s first AI SoC as advertised by Huawei. The new phablet will also arrive with a bezeless 6-inch with the 18:9 and dual Leica cameras on the rear, probably with up to 8GB of RAM and 128GB of storage.

Now it’s time to talk about the software moving all this powerhouse. According with the reports, the Huawei Mate 10 will arrive running the newest Android 8.0.0 Oreo out the box, with the EMUI 6 Huawei’s skin running atop, we haven’t much info from what EMUI 6 will bring in difference from previous versions, but now some leakeds screenshots shows the Mate 10 predecessor Huawei Mate 9 running EMUI 6, and based on these screenshots we can get an idea of what expect.

The screenshots are an courtesy of our friends at XDA and shows some new features to be arriving inside EMUI 6. Firstly we have most of new features brought by Android Oreo. We have the new system-integrated auto fill API, the notifications channel granular options, the picture in picture option for improving multitasking capabilites and the other features included in Oreo that we’ve been aware of over the year will all the previews and since its launch. 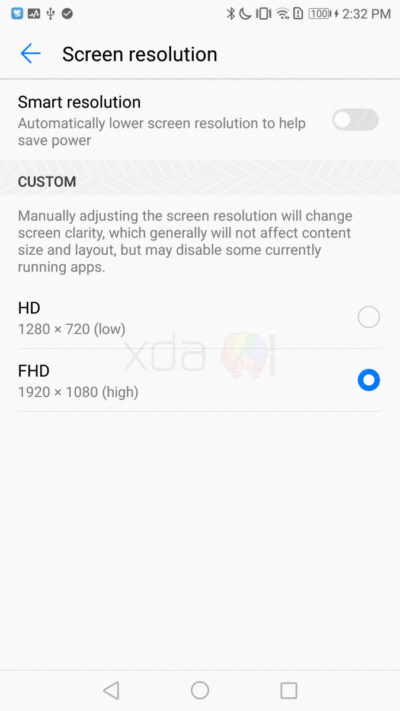 Now when comes to EMUI 6 exclusive features, we got some new interesting stuff. Firstly, we will have an option in display to drop or upscale the phone resolution between HD (720p) and FHD (1080p). That’s a nice feature for those who want to keep the conservative profile dropping the resolution, or even for stressing more the device and getting better performance of the GPU. While this may be considered a placebo in terms of power conservation for some, it’s an undeniable fact that you will get more performance with your GPU less stressed running in an minor resolution.

Next feature would include and whole new setup control for your navigation bar, basically you can hide your Navigation Ban by reducing it to a simple arrow where you can swipe to hide or show up your navigation bar, cool for when you’re running some multimedia on your device and don’t want to see the navbar showing up by and accidentally touch, by hiding the navigation bar you will also get the navigation dock option where you can use gestures to replace navbar functions, such as sliding up for home screen, sliding down for notifications, slide left or right for Recent Apps.

For more features, you can check the XDA’s post, below in this page. Anyway we’ll get a fully overview of the software once Mate 10’s launch.

Next Fingerprint Sensors Will Soon Become Obsolete In Android Devices