According to prolific leaker Evan Blass, the upcoming Huawei Mate 10 Pro may be bundled together with a new accessory – a smartpen. The notorious leaker published a photo of the device with the smartpen on his Twitter page.

The smartpen in the photo is the Moleskine Pen+, a connected pen that is designed for the company’s Paper Tablet planners to sketch content, and then upload it to connected smartphones. Part of Moleskine+ Smart Writing ecosystem, the pen connects to smartphones via Bluetooth for data uploads. 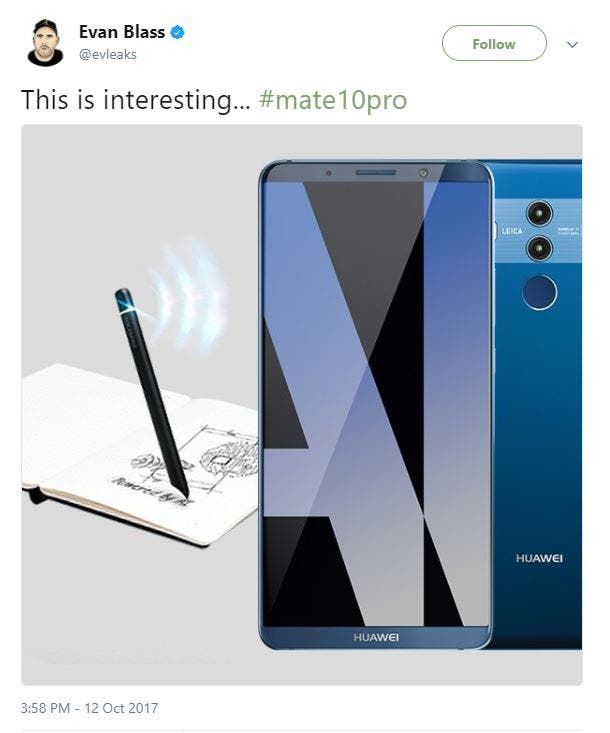 As the pen could be bundled together with the upcoming phone, Huawei is encroaching into the territory of the Samsung Galaxy Note 8, with its S-Pen. Functionally they’re pretty different, but it’s still a fairly similar idea. Plus, there are a significant number of consumers out there that really love Moleskine planners, making the Mate 10 Pro an obvious choice.

Do take this news with a grain of salt as nothing is confirmed as of right now. With the launch will be taking place only in few days time, we will see if this rumor is true or just a fancy wishful thinking. Until then, we look forward to seeing what Huawei has in store for their biggest device yet.

Next New Xiaomi Mi 6C render surfaces; Will it use Surge S2 SoC?