It’s no surprise that people will do – sometimes- almost anything in order to get a freebie. In this case a VERY expensive freebie, like an iPhone 8 model that some Philip Harrison got a couple of days ago, after getting a special tattoo on him!

And here’s how the story goes: back on the 6th of October this guy tweeted T-Mobile’s CEO (John Legere) that:

Hook me up with a iPhone 8 and ill tattoo the T-Mobile logo on my arm for all to see, you have my word @JohnLegere

The CEO was there to reply and he accepted the challenge instantly: 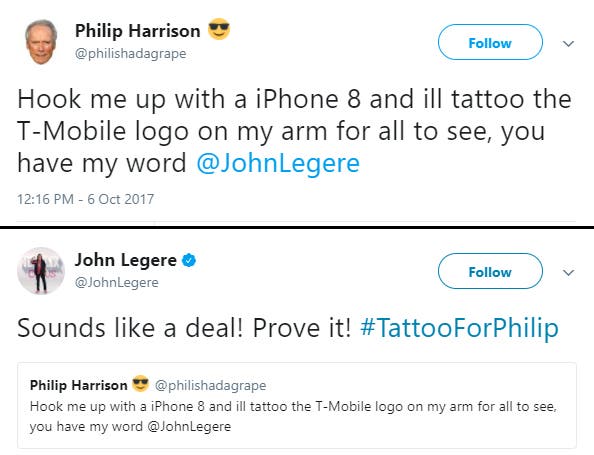 To cut the story short, Philip Harrison did the tattoo and a couple of days later he had all he asked!

Sorry for the late response @JohnLegere no phone to tweet with,Went out looking for a shop but all closed, results tomorrow #TattooForPhilip pic.twitter.com/gEycwsU5xH

A brand new iPhone 8 from T-Mobile, some promo accessories and… a pink tattoo on his arm!

Did I do it for an iPhone 8? Sure, but I also did it for the story that would be forever attached to the tattoo #TattooForPhilip pic.twitter.com/CKH3oqpnf0

Would you do it? Tell us what you think!