A new Smartphone from Gionee could be in the pipeline, at least according to a Gfxbench listing. The upcoming smartphone benchmarked as Gionee F205 with the available specs hints at a lower mid-range device that could be announced as a successor or part of the Gionee ‘fashion and lifestyle’ F series of phones.

According to benchmark results, the device is expected to pack a 5-inch multi-touch display with 1440 x 720 pixels resolution. A 1.5GHz Quad-core MT6739 processor with IMG PowerVR GE8100 GPU is expected to be at the heart of the device. Working in tandem with Mediatek SoC is 2GB RAM and 16GB internal storage space, out of which only 10GB is accessible by users.

The device is listed as having an 8MP single rear shooter with 4K video ability, auto-focus, face detection, HDR, LED flash and a 5MP front shooter.

The phone runs Android 7.1.1 Nougat out of the box and it is expected to come with the usual connectivity options including Wi-Fi, Bluetooth and GPS. The battery capacity is yet to be confirmed, but the device is confirmed to come with accelerometer, barometer, compass, Proximity sensor and Light sensors. 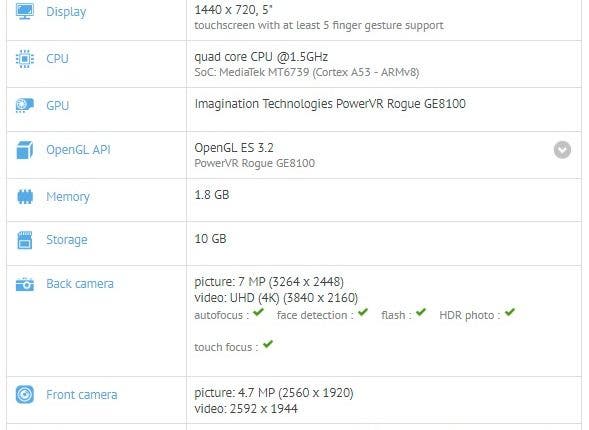 As for design, the Gionee F205 much like the F103 pro could come with slim body, metal frame and possibly rear fingerprint sensor.

Next All hail the King: Official Gizchina Wholesale Shop is coming, completely revamped!