A new HTC made phone bearing model number HTC 2Q4D1 has been spotted on benchmarking websites, Geekbench and GfxBench.The phone comes loaded with some interesting specs sheet which hints at a flagship device. While there are no details on the smartphone’s name, tech pundits out there suggests the device may be HTC U11 plus, which surfaced on the rumor mill a few days back when a press invite for an HTC event on November 2 was leaked. That said, the Geekbench and GfxBench listing pulled out a few details about the phone. 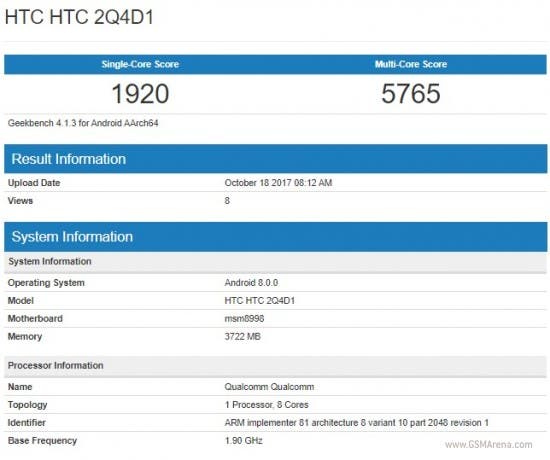 According to Geekbench listing, the HTC 2Q4D1 will be powered by a Snapdragon 835 chipset and will ship with 4GB of RAM for all your multitasking need and run Android 8.0.0 Oreo out of the box

The smartphone might be the rumored HTC U11 plus or might be an entirely new phone from HTC which might be unveiled along with other HTC phone on its November 2 launch event, whatever it turns out to be, we presume more details about the phone will surface online before it is made official.