Xiaomi is the second most popular brand in India, behind Samsung. In April this year, Xiaomi held a conference where its CEO, Lei Jun, revealed that the company leaped to second place in its Indian market share which he attributed to its cost-effective sales strategy. Now, Xiaomi vice president and general manager of its Indian manufacturing have announced via his official Weibo handle (@donovansung) that the company has once again achieved another landmark by pushing over 400million units in India. Xiaomi sells about 4 million smartphones monthly in India which means that it consistently pushes out about 130,000 units every day (all year round) which is quite impressive. 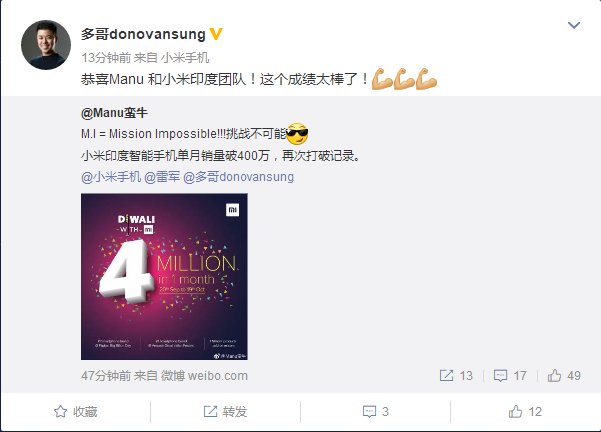 With this increased demand for Xiaomi smartphones, the company held a supplier conference in Wuhan to discuss timely delivery of products through joint efforts. So far, Xiaomi has been consistent in keeping its prices at the barest minimum and its products have proven to be trustworthy thus it is bound to ship even more units in the coming months.

Previous How long can the battery in Oukitel K6000 Plus really last ?