Cat is no stranger to manufacturing smartphones that are designed for folks who work outdoors or in other tough environments. Cat phones are tough-as-nails and the two latest offerings from the company: the Cat S41 and cat S31 can withstand just about anything you throw at them.

First showcased at the IFA conference 2017, the Cat S41 and S31 are successors to the cat S40 and S30 respectively. Both devices come with MIL-SPEC 810G military specs grade and are IP68 certified. While the Cat S41 can stay underwater up to two meters for an hour, the S31 can only withstand 35 minutes in 1.2 meters of water. Both devices have been subjected to a 1.8m fall onto concrete and remained unscathed.

Aside from having a nearly indestructible body, the Cat S41 packs a massive 5,000 mAh battery with MediaTek’s Pump Express 2.0 for fast charging (a huge improvement over the 3,000 mAh on the S40), the battery promises up to 38 hours of talk time (on 3G) and up to 44 days of standby, and interestingly, the device can be a source of power to other devices with smaller battery capacity.

As for the display, the Cat S41 boasts of a Corning Gorilla Glass 5 protected 5” 1080p screen and powered by a MediaTek chipset (octa-core 2.3GHz). The Cat S41 is equipped with technology that makes its display usable under direct sunlight and can also be used when wearing gloves or wet hands. Other specs include a 3GB of RAM, 32GB of storage, a 13MP rear camera, a 8MP front-facing camera and runs Android 7.0 Nougat out of the box. 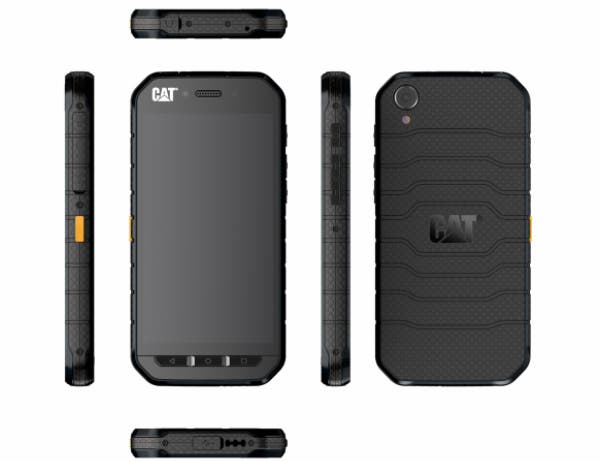 The Cat S31, in contrast, features a 4.7 inch 1280 x 720 pixel HD touchscreen display, still works with gloves or wet hands, but protected by the older generation Corning Gorilla Glass 3. Every other specs look modest, including a 1.3 GHz quad-core Qualcomm Snapdragon chipset, 2GB of RAM, 16GB storage, a 8MP rear sensor, a 2MP front sensor and a 4,000mAh battery with an unknown rating.

Next Cat takes on the Galaxy tab active with the Cat T20, its first tablet